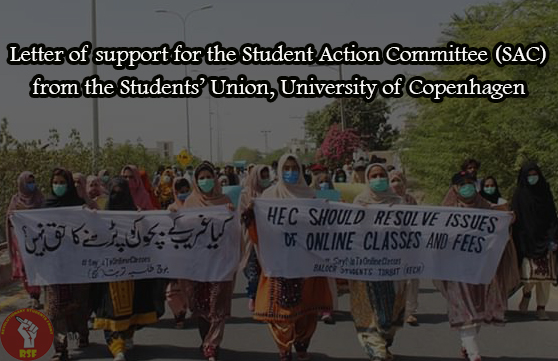 HUMrådets støtteerklæring til de pakistanske studerende/
Letter of support for the Student Action Committee (SAC) from the Students’ Union of the Faculty of Humanities, University of Copenhagen.

In the Students’ Union of the Faculty of Humanities we support the fight for free and equal education for all, and as such we support the ongoing student protests in Pakistan led by the SAC. We support the students’ right to unionize and we ask that their voices be heard.

Since 1984 student unions have been banned in Pakistan, and even though the issue has been raised several times through the years, protests in different ways are still a valuable and necessary tool to fight for this change. Such protests should not be met by violence and arrests from the local authorities.

Furthermore, we have seen the introduction of online classes during the global outbreak of COVID-19, which impacts the availability to education in a socially skewed way. Large parts of Pakistan are without electricity and internet, which results in the inability of especially the students from poorer backgrounds to participate in the online classes. Large protests have recently tried to make this issue known, for instance under the hashtag and slogan #SayNoToOnlineClasses, where students in more than 30 districts have tried to make their voice heard. Sadly, some of these protests have been met with violence, as seen in Quetta on June 23, where several protesters were beat with batons and subsequently arrested. These violent repercussions are especially problematic, as Pakistan has a past with ‘disappearing’ students, torture and otherwise horrible treatment of protesting students.

We ask that the students of Pakistan receive the necessary relief packages to support them in the current situations, as we have seen in several other Pakistani industries.

Students’ Union of the Faculty of Humanities, University of Copenhagen
#SayNoToOnlineClasses