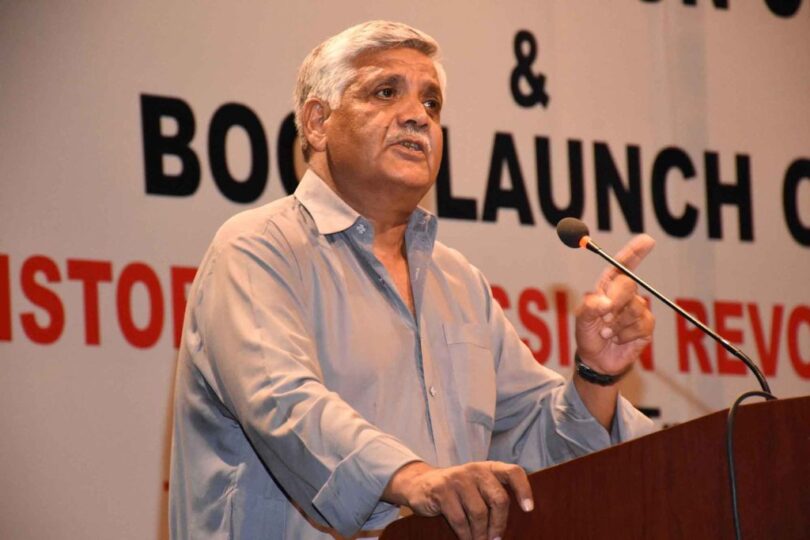 My personal relationship with Lal Khan or its depth does not matter here. The thing that matters is how Lal Khan’s untimely death affects our politics and society in general. 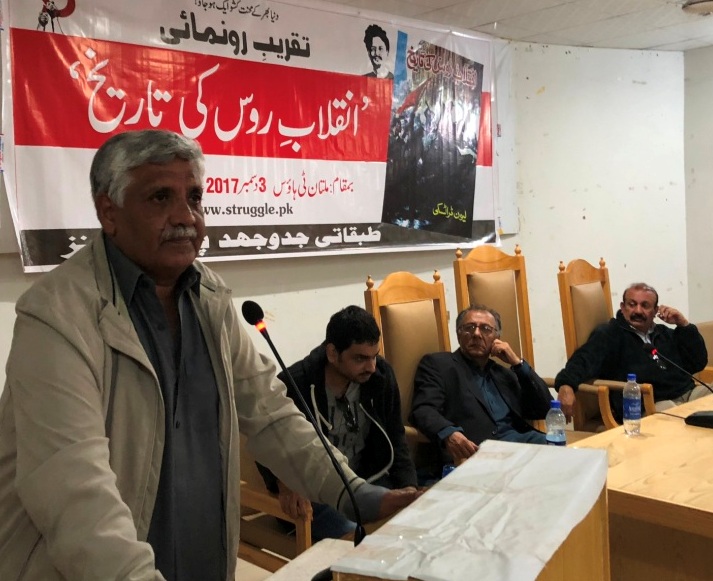 Comrade Lal Khan will be remembered as a prominent and epoch-making person in Indian subcontinent. Dr. Ali Shariati, who was killed during the Iranian revolution, once said, “It is not important at what age a person dies. The thing which really matters is how important a role the person is playing in his social and political struggle at the time of his death and what is the level of his historical indispensability.” In this regard Lal Khan will be remembered as one of those giants of subcontinent who bore everlasting imprints in the course of history in their periods.

Lal Khan was a great ideological theoretician and preacher of socialist revolution in Pakistan. He arduously dedicated every single moment of his conscious life for his ideological commitment. He was the flame that burnt till the end with the fervent of its struggle and revolutionary zeal. Hence, he would enlighten the dark and perilous path of future generations of revolutionary legions.

At a time when left wing was engulfed in its darkest hours and revolutionary movements were ebbing on a world scale, Lal Khan kept the flag flying. He inherited a barren historical period of counter revolution. It was a time when Soviet Union was disintegrating, the Berlin Wall falling and ideas of “End of history” were being acclaimed. It was a time when world capitalism, worst imperialist aggression, religious terrorism and ideological back-stepping were at their peak. Lal Khan was confronting the worst period of history. While departing, however, like every revolutionary wave in history, he dealt such a fatal blow to the foundations of this reactionary system that it paves the way for the future battles, like the young Narodniks in Tzarist Russia who braved a reactionary and harsh period and their sacrifices ended up in the Bolshevik Revolution of 1917. Nothing goes unrewarded in history. No action disintegrates in the air without leaving its imprints. History keeps a ledger of all instants, and surely, there will be an instant among millions that would unleash the tide of that revolution which has been the dreams and aspirations of the oppressed masses for centuries.

In the leftwing history of Pakistan, comrade Lal Khan belonged to the third generation of leftists. The preceding two generations mostly, knitting those cherished dreams of revolutionary ideals. The first generation mostly included revolutionists from educated, enlightened and privileged strata of elite classes. Inspired by recent Russian Revolution they dreamed of getting rid of British Imperialism and building a socialist society. They mostly comprised of poets, writers, intellectuals, journalists, professors, students and enlightened individuals from feudal aristocracy, namely, Faiz Ahmed Faiz, Mian Iftikhar Hussain, Sayyad Sajjad Zaheer, Qaswar Gardezi, Sibte Hassan and several other notables. They were mostly followers of Stalinist tradition of Soviet Union. The second generation of revolutionists were inspired by Maoism and opted for armed struggle. All of them retreated. Hence, the 50 years of history of Pakistani left was a history of retreat which was bequeathed to comrade Lal Khan.

At a time when the revolution of 1968 was ebbing, he started his conscious struggle. He inherited the defeats of two last generations before him. The way the 1968 revolutionary upsurge was derailed by the incompetence and opportunism of world and national communist parties, it further cemented Lal Khan’s ideological maturity. It is not an accident that when the ideological basis of revolution were crumbling on a world scale, Lal Khan was delving into its reasons and wrote an outstanding book “Pakistan’s Other Story” which is an excellent book regarding the history of left in Pakistan. Comrade Lal Khan, while employing great ideological ingenuity and deep historical insight, sought the reasons of the failure of left in Pakistan which is of great importance.

In his analysis of the dynamics of socialist revolution in Pakistan, comrade Lal Khan made some remarkable historical additions and pointed out some inconsistencies which have been impeding the movements over the years. For example, he devised a policy of support and criticism of the mainstream traditional party of Pakistan, depending on the recurrent issues. Although this tactic was employed previously too, but Lal Khan employed it as a political weapon for the first time.

The second inconsistency was the evolutionary stage-ism of revolutionary process which stipulated that socialist revolution would go through two stages. First stage would be of bourgeois democratic revolution and second would be of socialist revolution. Lal Khan rejected this Stalinist position. He was probably the first leftist leader in Pakistan who criticized the Stalinist model of Soviet Union and exposed the betrayal of revolution. He acknowledged the “holy excesses” perpetrated in Soviet Union which had been repudiated till date in the name of dogmatism. For the first time in Pakistan, he openly condemned Stalinist dictatorship as a betrayal of Bolshevik Revolution.

Lal Khan was basically an internationalist. He was opposed to analyzing the political conditions of a single country in isolation from world politics. He was of the view that Socialist Revolution was a complicated phenomenon intimately linked with national and international perspectives. Moreover, he had very creative and radical concepts regarding the structure and building of revolutionary parties. He said that revolutionary parties could not be built by mutual appeasement and holding press conferences in drawing rooms; rather, they are born in the throes of spontaneous upsurges in historical processes. Dialectically, revolutionary parties are the product of material conditions, just as Peoples Party came to being as a result of a long strike of railway workers in 1967.

Dr. Lal Khan had a charismatic personality and possessed ideological ingenuity. He was definitely a genius in leftist history of Pakistan. It takes ages for one such individual to emerge. Despite his revolutionary view, he was a beautiful amalgamation of traditional and modern. He was such an epoch-making person who brought continuity in Pakistan’s leftist history and adapted it to modern conditions. Lal Khan bore many similarities with his ideological hero Leon Trotsky, despite both having different historical and social conditions. As Trotsky brought new dimensions in Bolshevik revolution, Lal Khan, too, didn’t follow the path of socialist revolution blindly, rather he consciously observed and chose his path. Through this incomplete piece of writing I offer my condolences to all admirers of comrade Lal Khan, including myself, and dedicate a verse of Faiz Ahmed Faiz to his remarkable struggle and his tragic death:

Whatever befell me, I endured but at least on the night of separation,
My tears adorned your future.

This article was originally published in Asian Marxist Review Spring 2020 edition. Comrade Haider Abbas Gardezi also left us on the eve of 7th November 2020. Here we are publishing the article to pay tribute to both the revolutionaries.