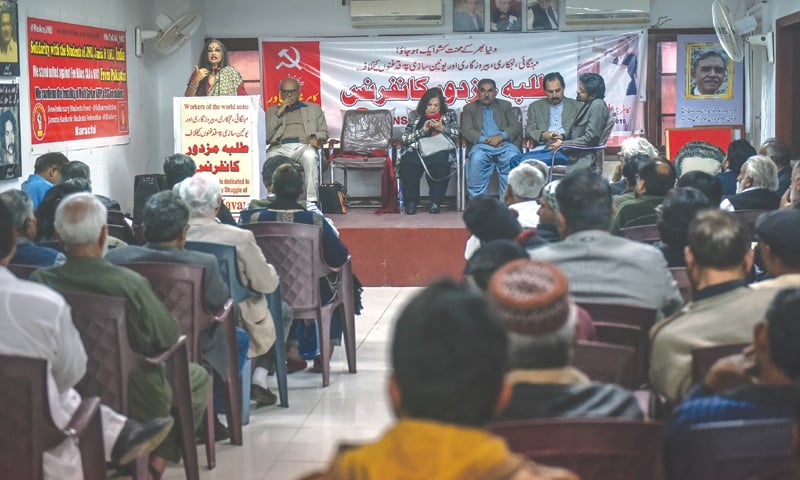 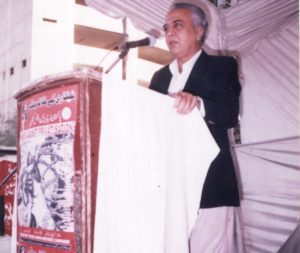 Sheema Kermani, activist and classical dancer, remembered Ali Yawar as an inspiring figure who used to support women too. “And today we see women at the forefront of every progressive struggle,” she said.

“Actually, all of us leftists need to unite and stand behind each other’s causes because the fascist thought wants to control us,” she added.

Nasir Mansoor of the National Trade Union Federation (NTUF) urged everyone to stand up against fascist tendencies. “Whenever you stand up, you will be heard, so stand up,” he said.

Liaquat Ali Sahi of the State Bank Union said that Ali Yawar’s fight was exemplary. “Trade unions in our country have been made weaker and weaker since the time of Ziaul Haq. Our student unions, which were nurseries for politicians, were banned and there was no one to raise a voice about all this. We should all stand up for such causes. We can’t afford to be divided on such issues,” he said.

Kaleem Durrani of Irtiqa Institute of Social Sciences also praised Ali Yawar. He said he was lucky to have worked with him during his student days and watched how he always stayed focused on causes. “We wanted to turn the world around, which didn’t happen as we became old. But our fight is still on and it has been passed on to the youth who have now also joined in our fight,” he said, adding that it was sad to see how people today change narratives to suit their ulterior motives.

He shared how in 1968, on Oct 8, the National Students Federation (NSF) with help from the Communist Party decided to stand up against Ayub’s decade of reforms. “All of us students went from college to college, which were all closed. And that’s how the movement picked up. But sadly, now we hear from some people that the movement was started by the PPP. Kindly do not manipulate history for your personal gains. It was the Communist Party of Pakistan and Tufail Abbas who should be hailed for what happened then and what we were able to achieve and not anyone else,” he said. 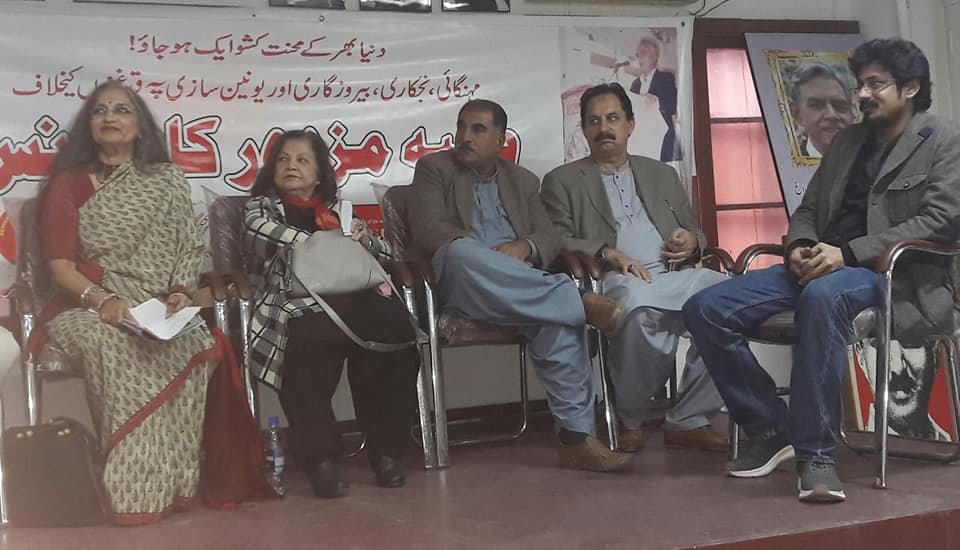 Waqas Alam, of the Progressive Students Federation, said it was sad to watch a confused generation of youth who weren’t even aware of the wrongs being done against them to stand up for their rights. “They are not even able to question the wrongs because they have lost the ability to even identify or analyse a crisis,” he said. “And without awareness, you are nothing more than a worker providing skilful labour while keeping your head down. Political engineering is exploiting our children, especially the 15 to 21 age group, that will accept anything coming its way without questioning.”

Ali Saqlain of the Sindh Students’ Council observed that if the youth were kept away from politics, politics would then become the playing field of some influential families only.

Manzoor Razi, chairman of the Railway Workers’ Union, said that they had so much hope from their youth but they in turn were looking at greener pastures as they moved to America and Europe. “It seems like they have thrown in the towel. Still, I urge them to look at their country and think about what is needed to resolve issues such as joblessness, lack of unionisation, the shortages of power, gas and water here. There was a time that we used to demand our rights but now we only whine and cry over the injustices we have to face,” he said.

Ghufran Ahad, vice president PTUDC, from Malakand said that it was good to see the students fighting back after years of silence.

Prof Dr Tauseef Ahmed said that it seemed to him as if they had all been circling around in the same ring for over 70 years asking for the same rights and fighting against the same restrictions. “But our years of fight have not all been in vain because the students’ right of unions is being recognised now. So where there have been failures, there has also been success,” he said.

Comrade Haris Qadeer of the Jammu Kashmir National Students Federation (JKNSF) said that there had been so many artificial issues created to take the attention of the people away from the real problems such as unemployment and inflation.

Senior trade unionist Habib Junaidi, meanwhile, said that the working class here happened to be around 35 per cent of the country’s population. “And only one per cent of the industry here is unionised,” he said. “We raise slogans of industrial revolution but without any hope within the working class there is going to be no industrial revolution,” he said. But, he added, the revival of student unions that we are seeing happening now is like a ray of hope in such times.

Women’s rights activist Anis Haroon also praised Ali Yawar for his selfless efforts in activism. “It was his kinds of campaigns and movements, which kept a fire burning in our hearts, which also kept us hopeful and alive. And taking off from the platform of the NSF and the Women’s Action Forum, we are still fighting,” she said.

“But, one must stay united and stay focused on a minimum agenda. There is no shortage of progressive people here, but we have forgotten to fight together for one another’s causes. All our fights are basically conflicts between the haves and the haves-not and we need to realise that we need to stay united because where one movement fails, we fail. So it is no use playing ‘party-party’ and come on the same page.”

She also said that it was great how the need for student unions had been recognised now. “What is happening there is making people like me feel young again. But do not readily accept whatever is being offered to you in the form of the bill prepared in this regard. Fight for more space. Push to open the boundaries,” she urged.

Awais Qarni, Central Organiser RSF, expressed solidarity with students movement of India in his speech. He said like in India we also have neo-fascist rulers here in Pakistan, the students here in Pakistan are also fighting back as we have seen recent rallies and marches for the restoration of student union. He said we reject any puppet-like union, we will fight for what we want and we are clear in our demands and struggle.“The tribute to Comrade Ali Yawar will be paid with the eradication of Capitalism, for what he was fighting till his last breath”, he said. 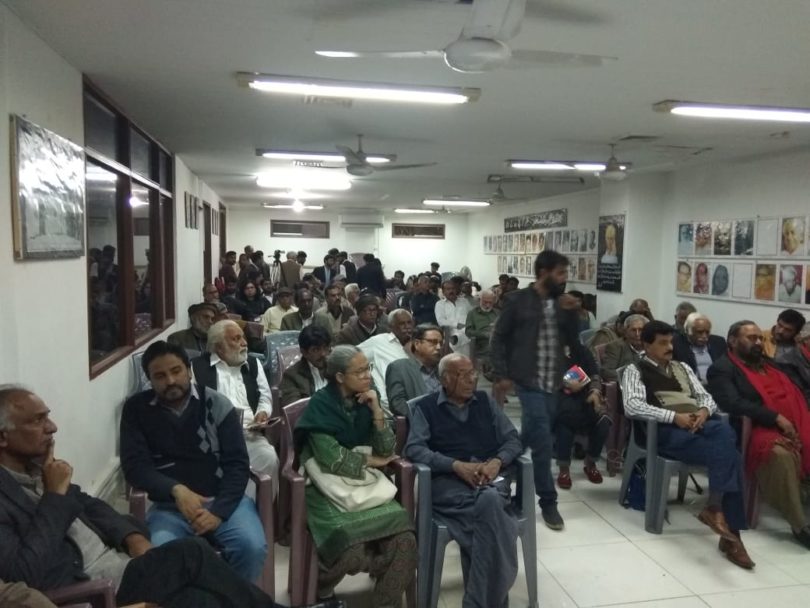 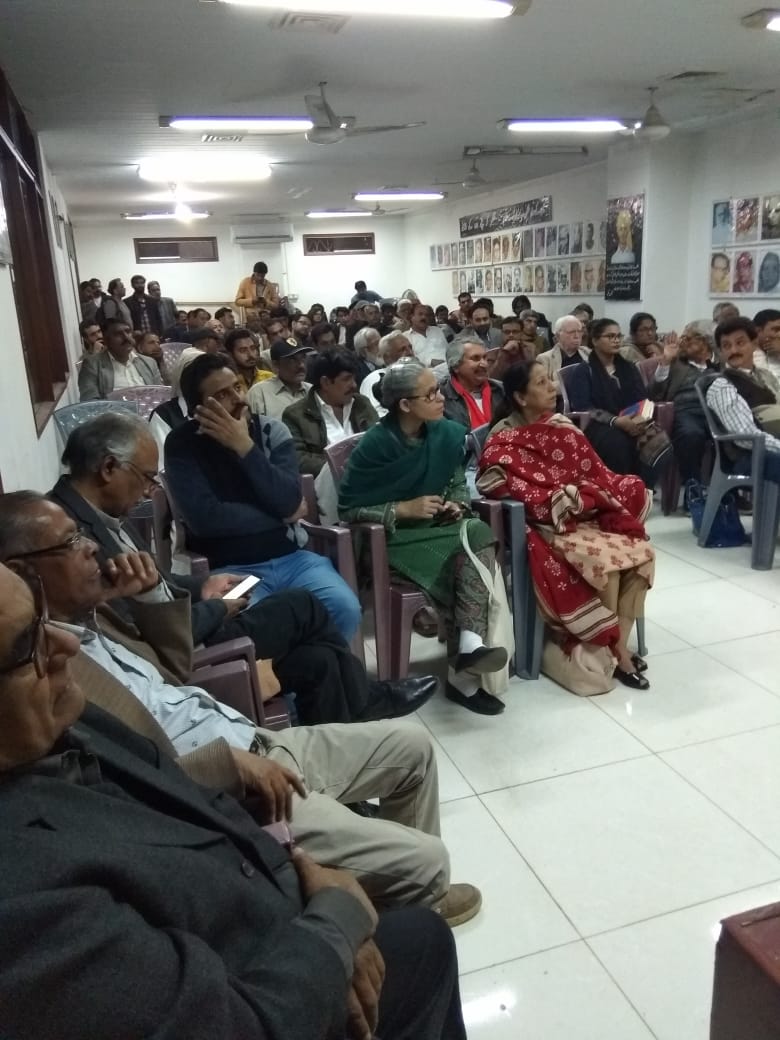 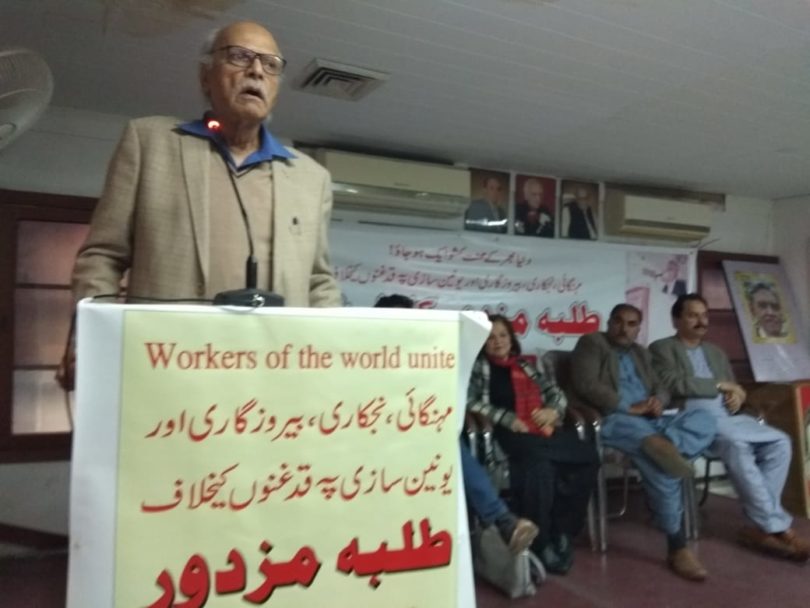 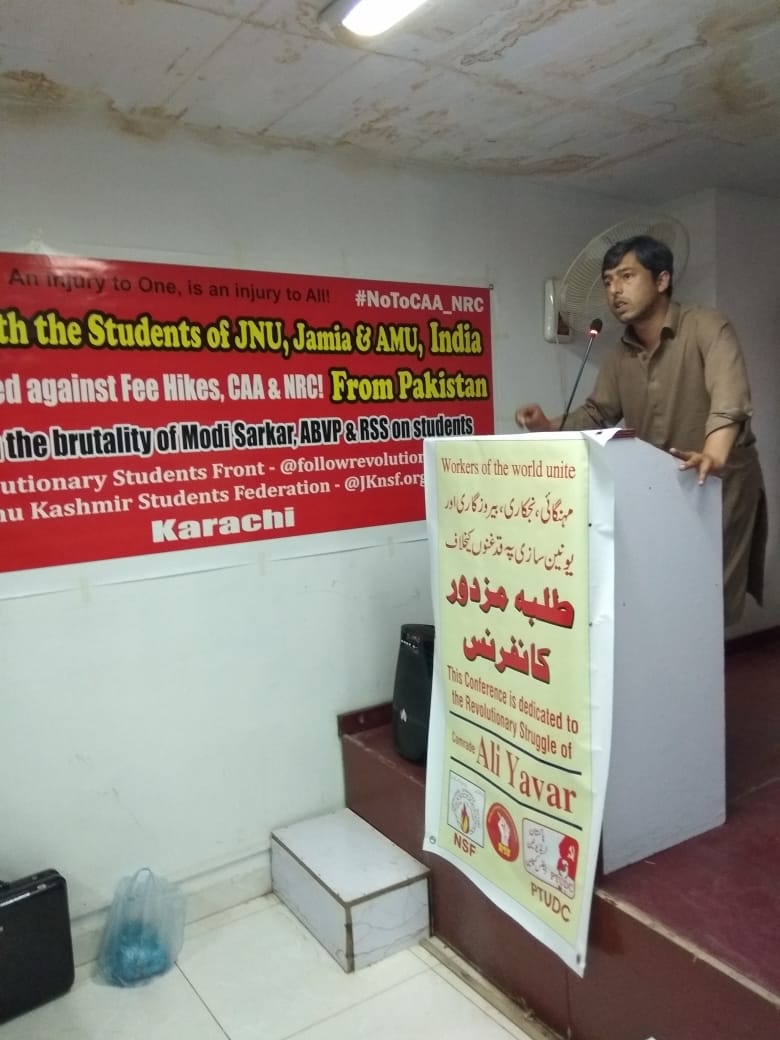 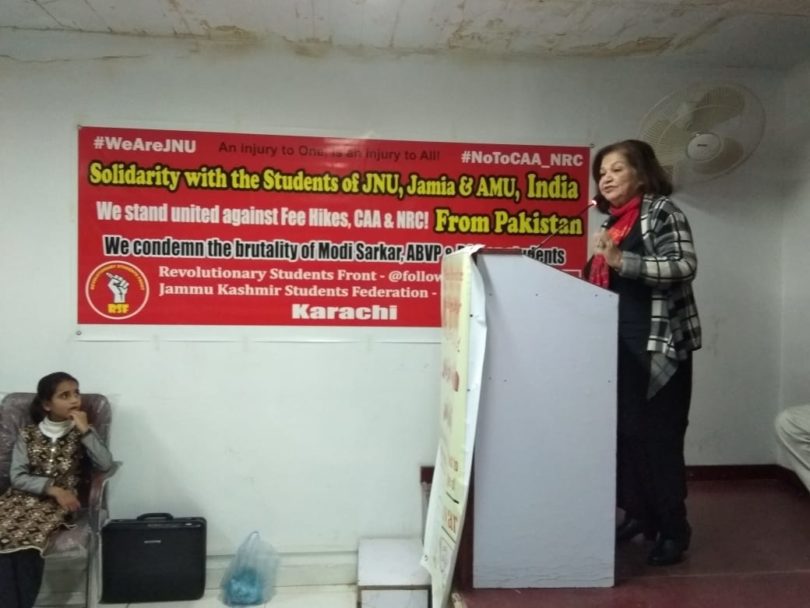 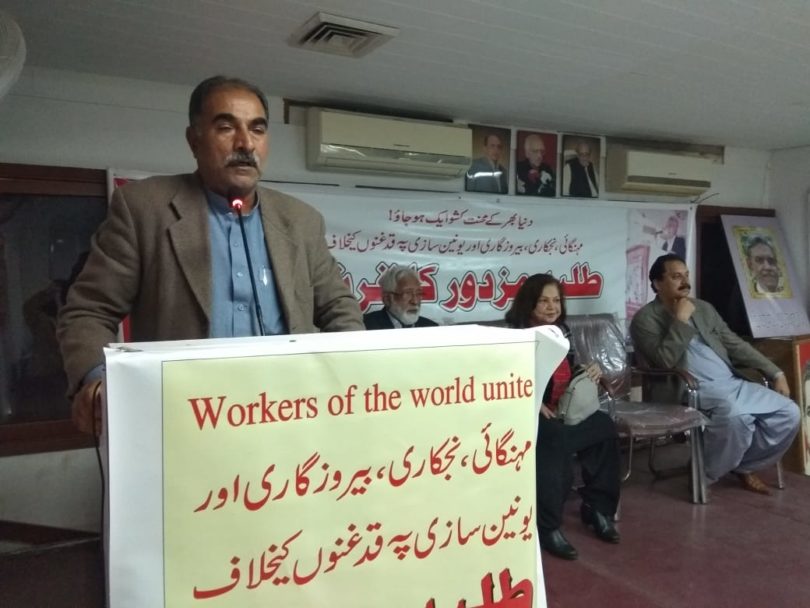 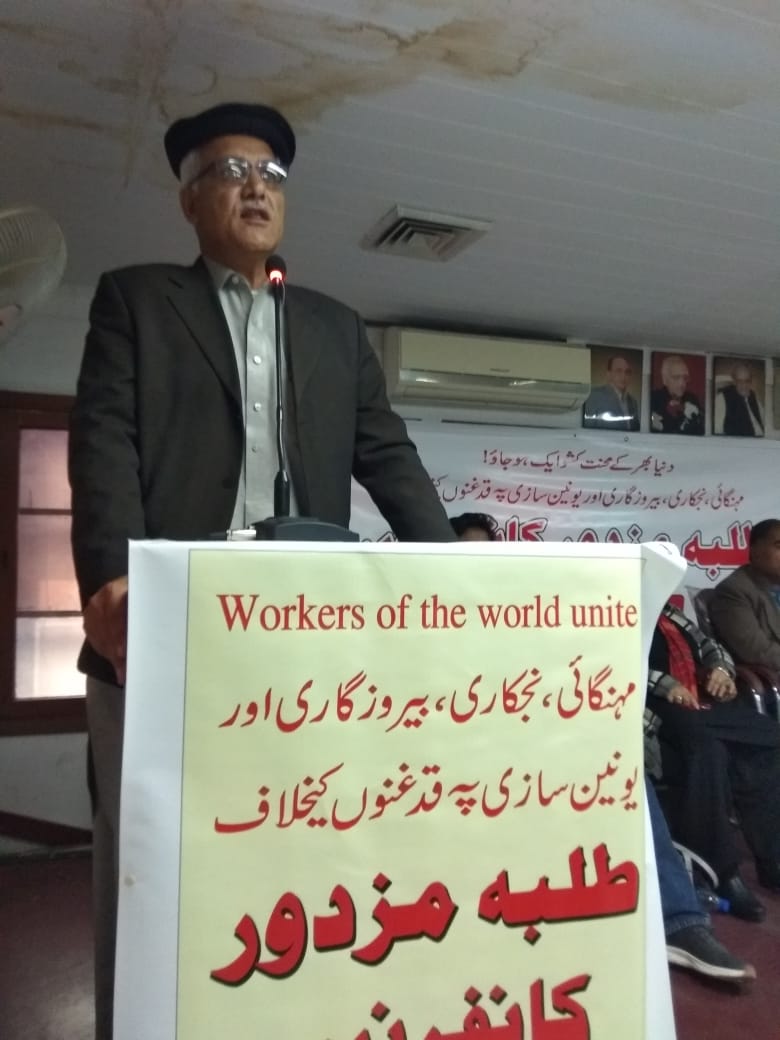 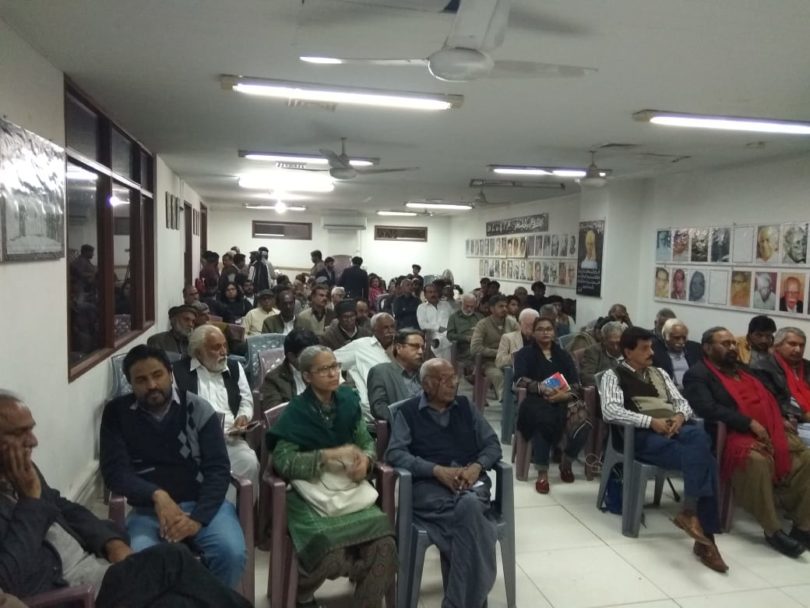 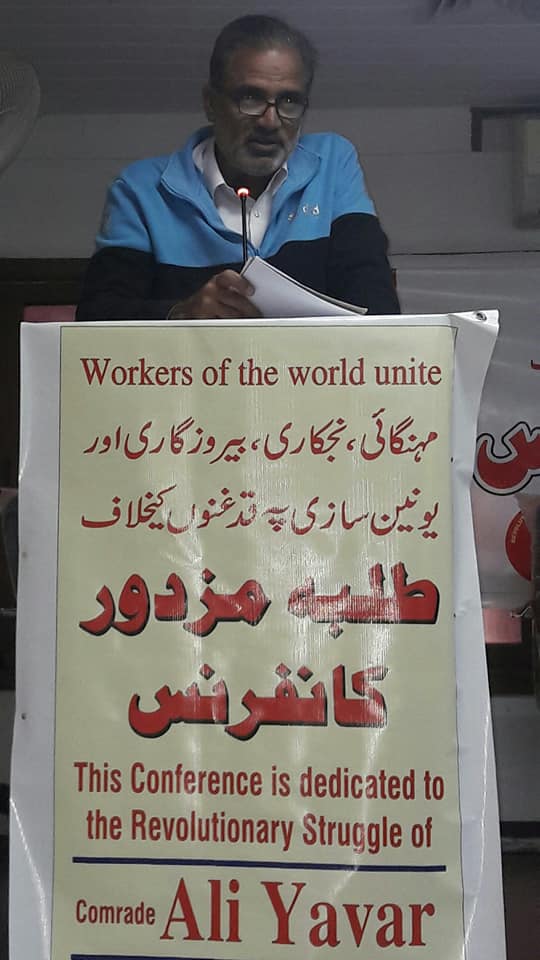 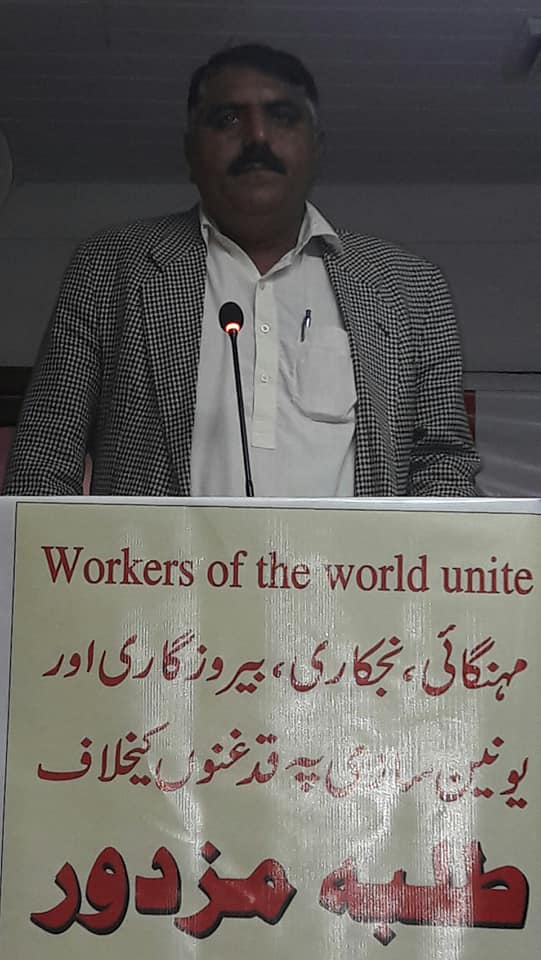 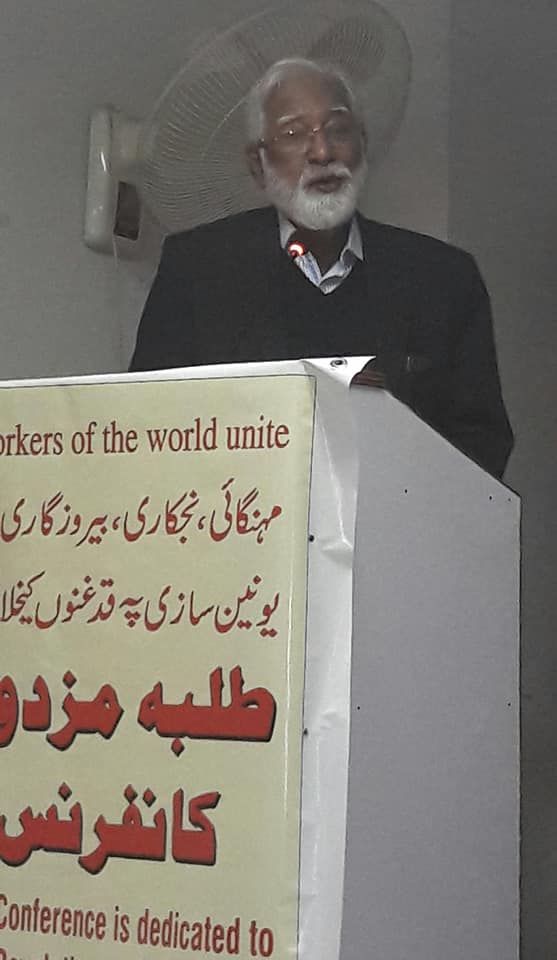 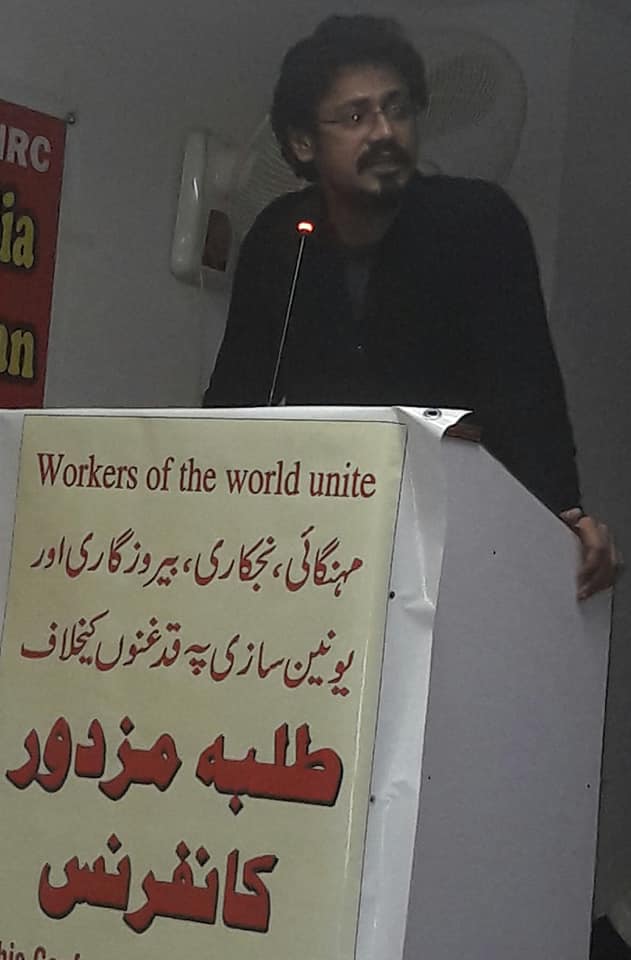 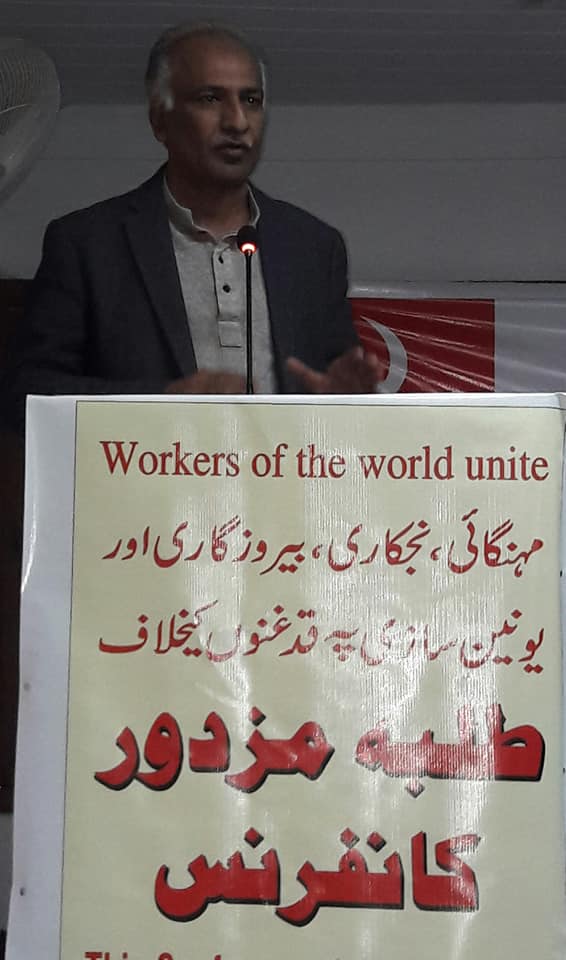 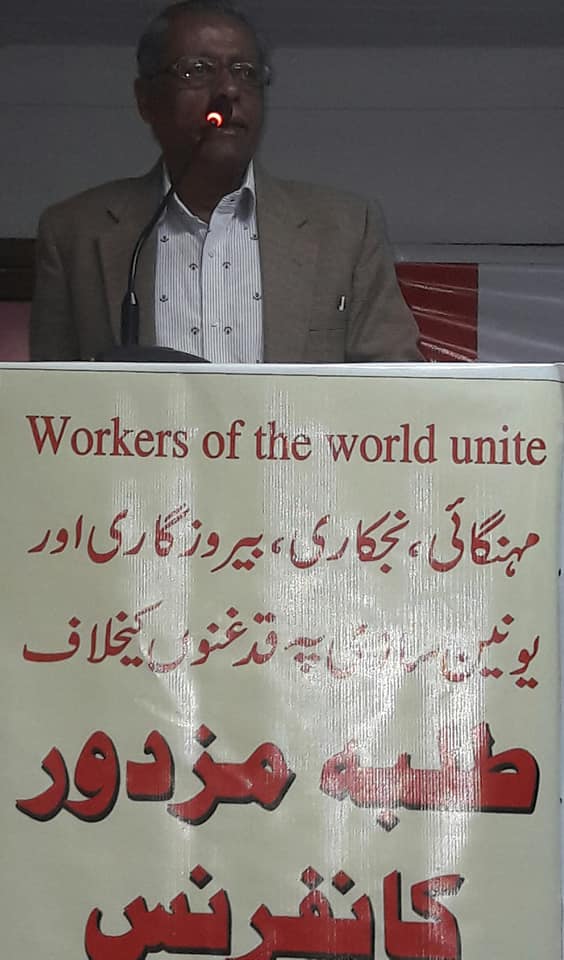 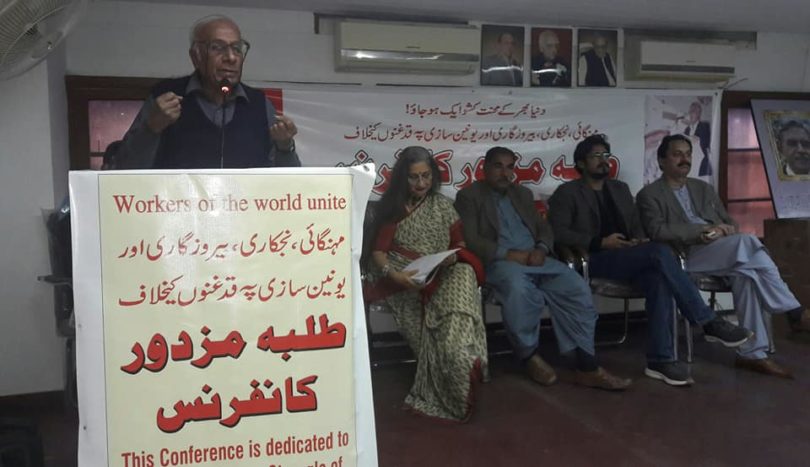 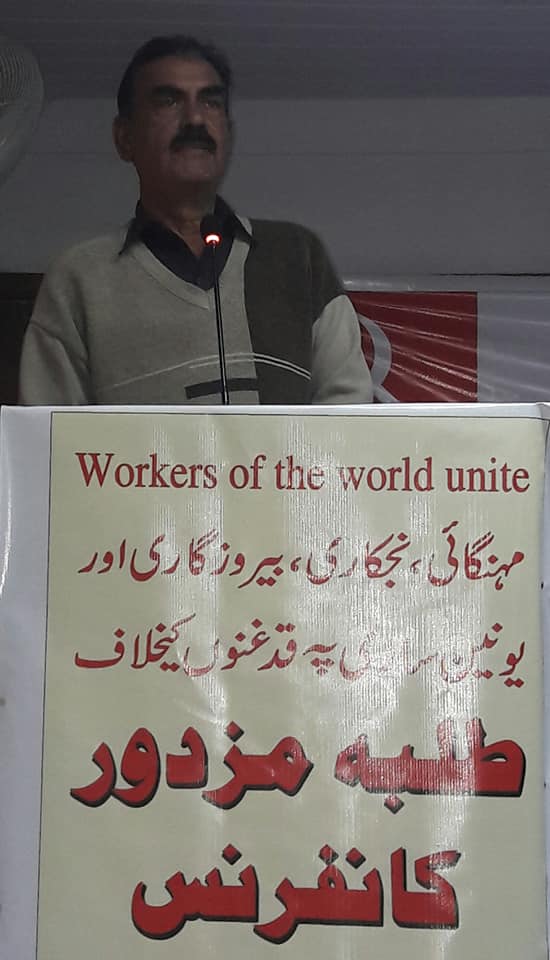 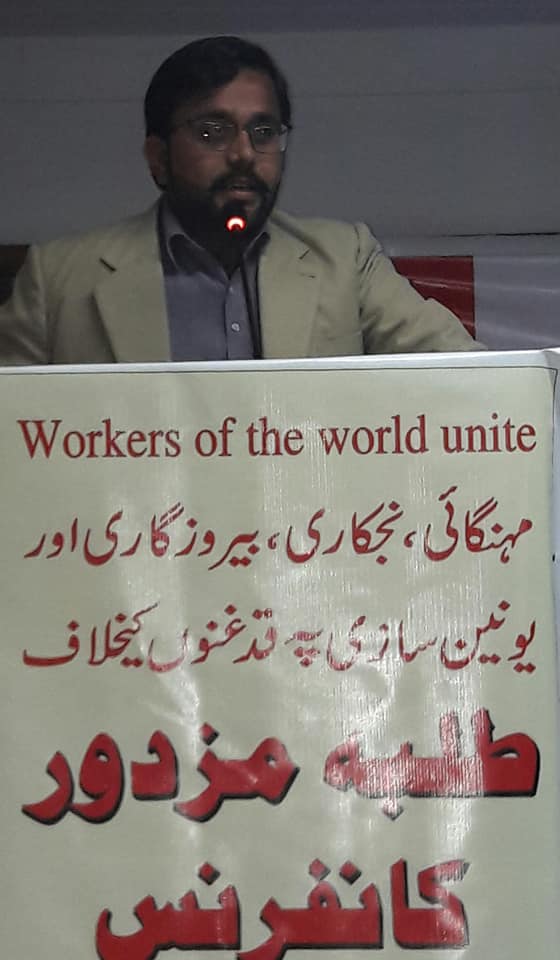 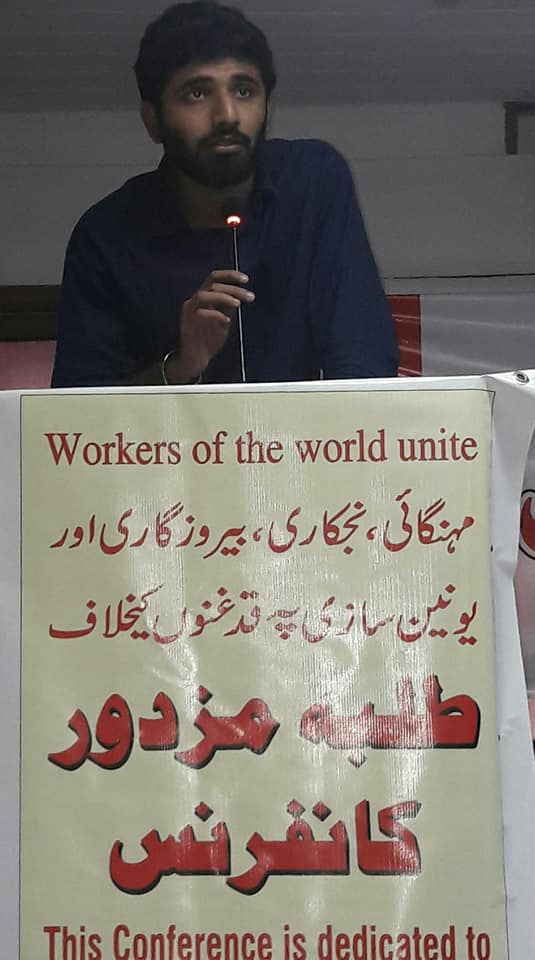 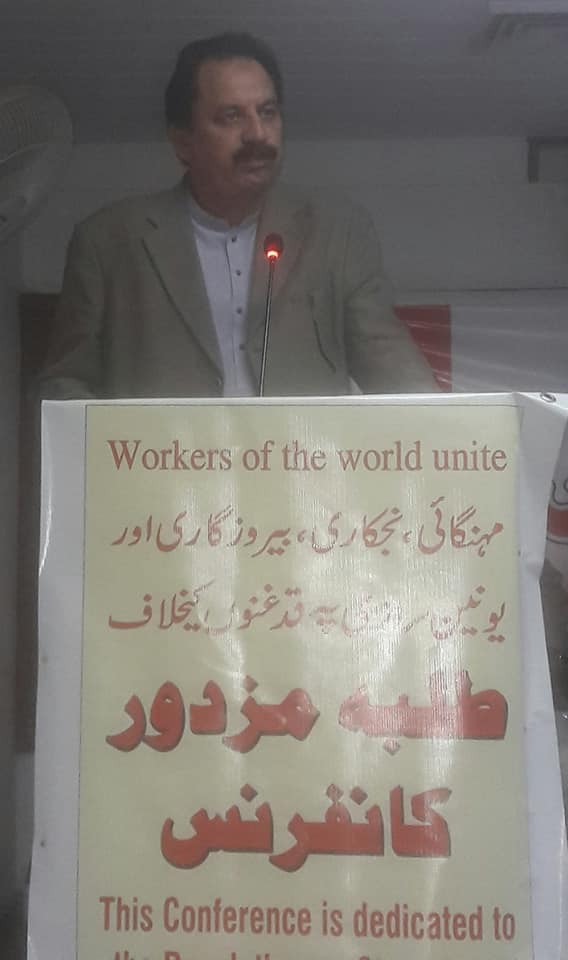