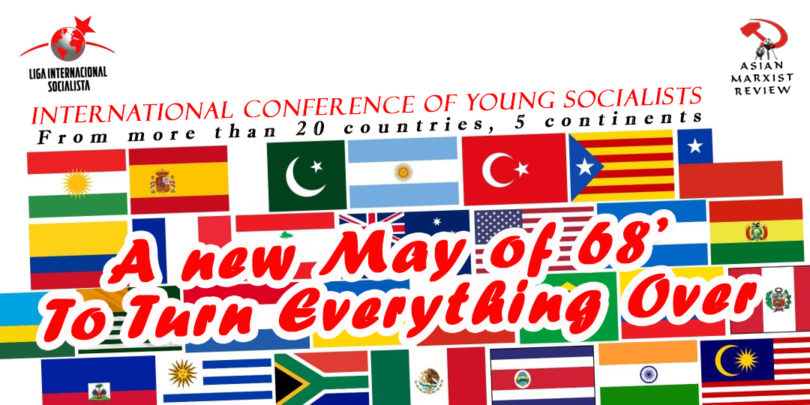 Change is in the air. And that change is not isolated, it is worldwide. If there was something missing in order to show the weaknesses of imperialism it was a rebellion in the core of the system. We cannot hesitate now. It is time to organize, to step up and to change. The International Conference of Young Socialists has that objective and ambition.

The first weeks of the pandemic amplified the historic references to other global diseases such as the Spanish flu, or some people even referenced the Black Death of the middle age. Economists have drafted their calculations and draw parallels with former crises. Some began comparing it to the 2008 crisis, others went further to the great depression, some even compared it to the long depression of the nineteenth century. Needless to say, they use those drastic comparisons to former crisis to wreak havoc and the try to intimidate in order to implement their austerity measures. Both the comparisons regarding health and economy history nurture one single conclusion: capitalism worsens everything there is for people, for the greater social majority. However, other references are appearing and gaining influence. The thing is that we are going through a situation in which the first rebellions of the pandemic are taking place, and not just anywhere, but in the global core of imperialism. These rebellions are spreading and triggering massive actions in Europe and inspire protests in great powers like Brazil. This framework is led by multi-ethnic, low- and middle-class young students and workers. Right now, this outlook takes us back to a groundbreaking rebellion of the last century that stars the same initial protagonist: May 1968. Once again, the first symptoms of that massive reaction also vow to be greater in the current conditions of the decaying, reactionary and besieged capitalism of the twenty-first century.

Black (millennials) of the Working Class

Capitalism is not an “idea”. It is a specific social organization. It has centered power, an active repressive system, the means of production and of the economy. But it also possesses the mechanisms to develop ideology. Mass media, the education system content, family, religion, traditional political parties, bureaucrat union leaderships, among others, all of them work towards strengthening beliefs. That is how crises become “misfortunes without culprits”, poverty is just a “circumstantial contradiction”, pollution is just the result of “some people’s” wrongdoings, chauvinism is just a “torment we need to raise awareness about” and so on. In that way the system is never the single cause. This same logic is used to explain unemployment or even poor working conditions as accidents in economy, poor working conditions as a “decouple” that needs to be “regulated” and so on.  However, things do not work that way. Capitalism is defined as a production and social organization model which has one single goal: to ensure sustained and growing profitability to private owners and exploiters of human labor. Thus, with each economic crisis, which results in the decline of profitability, the big shots of this system act all the same. What do they do? They always use the same formula, they incorporate machines to replace human labor and increase productivity, deepen the destruction of the environment in order to obtain cheaper raw materials and try to lower as much as possible the price of the key element that holds everything together: workforce. In order to lower wages, they use different resources such as unemployment, which applies pressure as an extra-economic factor for the working class to give up on their rights because they fear being unemployed. But due to the fact that employers cannot make anything work on their own (not even machines, robots or AI, anything at all) they have found a way to do it cheaply by deregulating working conditions. Thus, not paying any fixed wages but paying each production, not buying equipment but requiring the worker to obtain it, nor paying welfare or pensions. The youth greater majority joins the production in poor conditions. In Argentina, there are at least 3 million young people working in poor conditions. It is a striking number. However, capitalists face an obstacle: the fight, rebellion and reaction of the youth that takes a stand. The Black (millennials) of the working class, the outcasts. They take a stand, fight, raise awareness and that how things begin to change.

There are extensive and key debates to carry on the fight of ideas which is intensified due to the growing global rebellion. There are two or three important debates going around among young people:

Since we are short of time, we will not be able to extend on our positions in this article. But we can explain something specific: all those positions have something in common, none of them propose the strategy of eradicating racism, dismantling chauvinism or saving the planet by fighting against capitalism to change the system. And finally, acknowledging that the working class is a decisive subject due to the key role that it plays in production and the economy. Needless to say, there are proposals of a closed up sectarism that invalidate the oppression that capitalism amplifies and reduces everything to a capital-labor contradiction. We don’t agree with that either. Our approach integrates, in a struggle and common social reorganization platform, the deep-rooted measures aimed at abolishing and social exploitation and all types of oppression that stem from the capitalist domain of the world. At the end it is not about racism, chauvinism or pollution in capitalism. But about the fact that this system is substantially racist, chauvinist and predatory. That is why there is no way of humanizing it, it has to be completely dismantled.

To Turn Everything Over

This system and those who rule it (so far) divide peoples and youth in many different ways. Borders are just an artificial key element to divide and tear apart. That is why the most important task that we, socialist, have is to unite that what they divide. There is a global generation that is moving towards the same direction: against government, bureaucracy, repression systems, religions and false nationalism and they accumulate experience and awareness. It is a generation that leans towards internationalism and solidarity, towards empathy over borders regarding the causes for which it fights. It is essential for thousands of the best activists of this objective movement against capitalism to transform that energy into an alternative and political organization for the revolution. It is essential to build bridges over all the walls the rulers have set up towards a new world, a world of rights that are not up to discussion any more. That standpoint, that horizon is called socialism with democracy for those at the bottom line. That is why we fight for. We are internationalists, socialists for the revolution. On June 20, above all borders, more than 20 countries, representing 5 continents will gather in the International Conference. This is the moment to turn everything over.