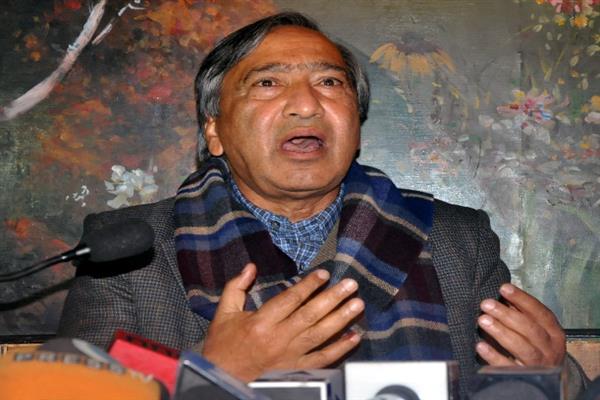 Mohammad Yousuf Tarigami, a four-time CPI(M) legislator from Kulgam, speaks about the problems in Kashmir and how the process of diffusing the crisis could begin.

The killing of Burhan Wani and the ensuing violence in Jammu and Kashmir has been interpreted in many ways. While the government of India has dismissed it as separatist violence, many others have viewed it as a human rights issue. How do you see it?

The mass demonstrations after Burhani Wani’s death should not be seen in isolation. Burhan symbolised the deep rooted unrest among a large section of Kashmiri population. Otherwise, one cannot explain how the protest happened. It has certain roots. Earlier too, there were protests – in 2008, 2009 and 2010. But the intensity of these protests is unparalleled.

Many factors have contributed to an environment of uncertainty that prevails in Jammu and Kashmir. Only one-and-a-half year has passed since the state government took over and we see such angry demonstrations. It is essentially a reflection of a deep rooted uncertainty. The emergence of the BJP at the national level and greater targeting of the minorities, unreasonable, irrational statements against them by those in authority has only added to the already existing uncertainty in Kashmir.

The protests were more visible in south Kashmir, which is traditionally the ground of Peoples Democratic Party (PDP). Before 2014, PDP campaigned against BJP. It said that if you want to stop the BJP from taking over the state, PDP is the only choice. But as it turned out, the PDP allied with the BJP. This made the already volatile situation more vulnerable.

Why do you say that the current protests are unparalleled?

If you look at the problem from the beginning of the 1990s, you will understand the crisis better. The 1990s were the beginning of the militancy period. The then prime minister P.V. Narasimha Rao tried to douse the flames but it hardly had any effect. Then Atal Bihari Vajpayee talked about resolutions.

Addressing a rally in Srinagar, Vajpayee, to a question on whether his government will talk with separatists and militant groups, had said that his government will do everything within the limits of insaniyat (humanitarianism). During Manmohan Singh’s time too, there were working groups, conferences, and interlocutors. In 2010, an all-party delegation met the then home minister and made certain recommendations as measures to douse the flames.

However, none of these recommendations were followed up, building an atmosphere of confusion in the valley. This type of callous attitude of successive governments has resulted in deeper disillusionment against the government of India. And, I must say, the uncertainty has only compounded since the BJP has come to power.

Why I say so is because at least the previous arguments of the Kashmir issue were addressed within a secular framework. Many in the Valley preferred India because of its secular nature. Now, that very secular India is under tremendous pressure.

For instance, last year, the then chief minister Mufti Mohammad Sayeed, a very senior leader of Kashmir, and Prime Minister Modi shared a platform in a rally in Srinagar. It is the same rally where the prime minister announced an assistance of Rs 80,000 crore to Kashmir.

Sayeed, in the rally, talked about the importance of engaging with Pakistan. He had said ‘Aap humsaayon ko badal nahin sakte (You can not change our neighbours) and cited insaniyat as a measure of conflict resolution as proposed by Vajpayee. We have to talk to Pakistan; that is good for Pakistan and for us too. We have to talk to all shades of people there. It will be good for restoration of peace.

However, Modi had categorically said that he doesn’t need any advice from anybody as far as Kashmir is concerned, and that he knows how to deal with the situation.

On the same platform, which was organised by local PDP and the BJP together, he snubbed the elected chief minister, his ally. This conveyed a message of humiliation and added insult to injury. Such humiliation by the government of India is one of the most important causes of protests in Kashmir.

Modi gave a message that he is dealing with enemy people. Please don’t make the mistake (of assuming) that all Kashmiris are terrorists. Right now, an average Kashmiri feels that if at all there is some unrest, the government of India will show only one type of response – that of pellets, bullets and tear gas.

If the government continues to terrorise the people, it will only be adding to the limited number of militants at present. The government must understand that Kashmir’s problem is because of accumulation of political, social, and human factors and not merely because Pakistan is trying to make inroads in Kashmir.

But hasn’t Pakistan been one of the players in fueling the Kashmir unrest?

No one denies that Pakistan is not interested in fueling the uncertainty. But I am pointing to the doublespeak of the BJP at the centre. The BJP has always taken a hardliner’s position against Pakistan when Congress was in the helm.

However, now the Modi government has indicated that it is interested in a dialogue with Pakistan. Even after the Pathankot attack, the government wanted to continue the dialogue. The prime minister surprised all of us by visiting the wedding ceremony of the Pakistani prime minister’s daughter in Lahore.

So, on one hand you are telling people that Pakistan is important and we have to talk to them, on the other hand, whenever there is unrest in Kashmir, you brand them as Pakistanis, beat them and kill them. How long will be this doublespeak? This is what the average Kashmiri is asking me.

The use of excessive violence to counter the protests is not new?

Yes, it is a deliberate attempt by those who are in power. They look at the Kashmiri problem only from the prism of national security. I don’t say that it is not a problem of national security. I am not ignoring that aspect. But you have to understand that Kashmir’s problem is a historical one and the massive unrest has only deepened by the successive wrongs of the governments in Delhi, and particularly made worse by the one headed by Modi.

How, according to you, should the government deal with the crisis?

The prime minister was not here when the crisis happened. He should have issued a statement, talked to the CM; he should have at least expressed some words of sympathy with those who are the victims of this violence. He should have stood by those who have died. But, let alone all the groups, he is not even consulting with those political parties which are in the parliament, or in the state’s legislative assembly.

The government should have convened a meeting comprising leaders of these political parties and listened to their concerns and discussed its plan of action.

The PM does not bother to engage even with the chief minister of Jammu and Kahmir. The state is virtually in siege. Even that does not bother the PM. The government’s only response is to deploy more military in the state. One must ask, why are you overburdening the security forces? I do agree there has to be some administrative measures. At the same time, the problem is not that simple. This is not a question of dealing with only militants. This is a question of dealing with a widespread anger against the government of India. You have to understand the nature of unrest.

Secondly, what about implementing the interlocutor reports? The political uncertainty has to be dealt through political process. Talk to the people of Kashmir, even those who are not a part of this democratic state. You can’t ignore those voices. And then you cannot just talk for the sake of talking. People of Kashmir should be assured that there is some credible mechanism in place. Unless they are convinced about the honesty of the process, all the initiatives will only add to the list of failures.

The demand for ‘Azadi’ is becoming popular every day. As you say the state’s response is only to deploy more military forces in the valley. Will demilitarisation help?

You see the question is not of demilitarisation. You have to understand the nature of the crisis. We have already been having a large number of military in the Valley. We have to ask this question – Have we been able to control the unrest despite such military presence?

You have to reduce the number of military forces. The big presence of military is an irritant now. Finally, people in authority must understand this. Only with a healing touch, the relationship between the government of India and Kashmir will improve.

We were guaranteed autonomy by Article 370. The substance of 370 has been mostly eroded, but each day the government and its supporters rake up the issue of 370 and demand its removal. This does not create confidence among Kashmiri people. There is massive anger against the government of India.

It doesn’t bother to discuss the problem with the elected representatives. Even the state legislature is not being taken seriously. Accumulation of many things which have resulted in massive unrest. Recently, in a Kupwara village, five innocent civilians were killed. The state legislature was not given any report on the encounter despite persistent demands.

This is not merely a violation of human rights. It is a human tragedy. If you go to a small village in Kashmir, the people will tell you how big this tragedy is. There has to be some response to this tragedy. The present government is working with complete impunity. The assembly is taken for granted.

Prime Minister Modi has talked about unemployment, lack of development as the root causes of the Kashmir problem.

Who denies that? My point is that what have you done to address these problems in rest of the country. The Rs. 80,000 crore package is only in papers. There has hardly been any work. We heard a lot of noise, but could not see its implementation yet. Even now, the flood water has not been removed. We have taken money from the World Bank as flood relief but it has not been put to any use.

Time and again such unrests in Kashmir create sharp differences among the Indian people. It has always been a polarising issue and the governments have taken advantage out of that.

People in the rest of India do not know the sufferings of people of Kashmir. It is very unfortunate that major news channels are not showing that and instead venting out a misplaced nationalist anger against Kashmiri people. I feel they are merely pawns in a larger political game.

The supporters of the BJP criticise the Kashmiri activists for not taking up the issue of Kashmiri Pandits, who too were forced to leave their homes.

It is again a part of the same tragedy. The Kashmir issue cannot be addressed unless an environment is created for their dignified return. But sufferings should get us united; they should not be used to divide us.

We are witnessing an unprecedented media gag in Kashmir as fallout of the current round of protests. What do you have to say?

Restrictions such as this have only added more fuel to the fire. Such media gags will only encourage dissent. Instead of exercising restraint and empathy, the government has relied on excessive use of force, media gags, and stopping all forms of communication. This is only bound to encourage the unrest and the deep anger that is already present.

This interview originally appeared on The Wire on July 19, 2016.