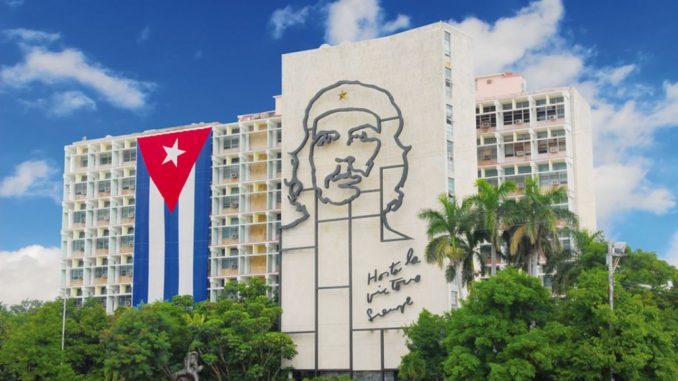 On Sunday, July 11, the largest mobilizations in memory broke out in Cuba, larger than the 1994 “maleconazo”. Thousands marched in various cities protesting the lack of food, medicines and the prolonged power outages in the midst of an acute economic crisis, aggravated by the Covid-19 pandemic and the criminal blockade of Yankee imperialism.

The Cuban Revolution of 1959 challenged the entire world order. 150 km from the hegemonic imperialist power and against the policies of the Soviet bureaucracy, the colonized people of a small island ruled by a dictator got rid of their dictator and their colonizers, took power in their hands and ended up expropriating the bourgeoisie. The Cuban Revolution became an inspiration to an entire generation, helping to forge a massive vanguard of young revolutionaries and unleash a wave of rebellions and revolutions across Latin America and other regions of the world.

Throughout the next 60 years, despite the tireless imperialist attempts to defeat it, despite the chokehold of the continuous murderous US blockade, despite the fall of the vital support that the USSR meant for the Cuban economy, despite a bureaucratic leadership that refused to expand the revolution internationally as Che proposed and to deepen it internally by promoting the broadest workers’ democracy, and has decidedly taken a path of capitalist restoration, the Cuban people refuse to give up their revolutionary conquests. The defense of those conquests and the recovery of those that have been lost is a central task of every revolutionary.

The protests that broke out on July 11 are the result of contradictions that have accumulated over many years. The criminal US blockade, which intensified during Trump’s term and has not been loosened since Biden took office, is the main cause of misery on the island since it was implemented six decades ago. The policy of capitalist restoration of the Cuban leadership, which began years ago but has accelerated in the most recent period, has aggravated inequality and poverty among the Cuban people. The Covid-19 pandemic dealt a strong additional blow, liquidating the tourism industry on which the national economy depends and causing an 11% drop in its GDP in 2020. In response to this situation, the government implemented austerity measures against the people. The pandemic itself reached a peak in infections and deaths in the days leading up to the July 11 protest. Although Cuba has developed its own vaccine, vaccination is long behind due to the shortage of syringes as a result of the Yankee blockade and the bureaucratic planning of health programs. This combination produced the situation of food and medicine shortages and prolonged power outages that finally caused the accumulated social discontent to explode in the streets.

The retreat of the revolution´s conquests and the accelerated course towards capitalist restoration proclaimed by the Cuban bureaucracy as the only way out against the blockade and isolation are ultimately also the product of the adoption of the Stalinist policy of socialism in one country and peaceful coexistence with imperialism; of having acted as a brake on the Latin American revolution, using the enormous prestige achieved by the revolution for calling on Nicaragua to not become another Cuba nor El Salvador another Nicaragua, and more recently advising Venezuela not to surpass the framework of capitalism and transferring there the same bureaucratic model that prevents the free initiative of the masses and causes setbacks in revolutionary and socialist consciousness.

Imperialism seeks to take advantage of the current social discontent and relative weakness of the Cuban regime, which does not have the same legitimacy that Fidel had, to attempt to subdue the Cuban people, liquidate the independence it has maintained for decades and the challenge that it has represented all these years, recover the island for free exploitation by its capitals, and transform it into its semi-colony. Its intentions are clear in the swift and cynical support that Biden offered the mobilization and the common intelligence held with sectors that raised slogans in the mobilization like “down with communism” or “Homeland and Life”, in reference to the song composed by Cuban expat musicians in Miami. We alert the entire Cuban people and the peoples of the world that a triumph of Yankee imperialism over Cuba would be an important defeat for the Cuban workers and for the worldwide working class. Above all, revolutionaries must stand clearly on the side of the working people to stop any imperialist attempt to intervene in the island.

The July 11 mobilization, however, was been heterogeneous. As was reported by Marxist sectors in Cuba itself, they arose genuinely from the people´s discontent over the extreme hardships they are suffering. They were not led by counterrevolutionary organizations, though imperialist slogans predominated because those were the only sector that acted in an organized way. It was mostly working class sectors that mobilized independently. In turn, left-wing intellectual sectors that demand freedom of expression also participated, as well as an important lumpenproletarian sector that took advantage of the situation to carry out destruction and confrontations.

The best way to stop imperialism would be to reverse the current restorationist course, turning the official policy towards solving the people’s needs, liquidating the privileges and the accumulation of wealth of the minority ruling sector, advancing towards a democratic opening for all working class and revolutionary organizations and supporting the peoples that rise in rebellions and revolutions in the rest of the world, calling on them to break with the capitalist and imperialist system to expand the revolution. Unfortunately, the regime is moving in the opposite direction. Its response to the protests was repressive, dispersing the mobilizations with clubs and tear gas and arresting hundreds of protesters, including left-wing and socialist activists and, even militants of the Communist Party itself like Frank García Hernández of the Comunistas Blog. And far from adopting policies to alleviate the people´s needs, recover lost ground and advance the socialist revolution, the regime affirms the path of capitalist restoration that it began long ago. In this way, the Cuban government aggravates the causes of social discontent, indirectly helping imperialism portray itself as an alternative. Even if the advance of Yankee imperialism on the island is prevented, a consummation of the Cuban regime´s policy of restoration in the style carried out by the Chinese CP bureaucracy would also mean a defeat for the Cuban people. Therefore, revolutionaries cannot offer our political support to the Cuban Communist Party regime or the Díaz-Canel government.

The International Socialist League opposes all imperialist interference, unconditionally defends the independence of Cuba and fights to defeat the criminal US blockade against the Cuban people. We defend the conquests of the 1959 revolution and the recovery of those that have been lost. We oppose the current austerity policies and the course of capitalist restoration that the Díaz-Canel and Raúl Castro regime has been pursuing. We demand the liberation of those jailed for demonstrating, the opening of working class and socialist democracy and a turn towards the deepening of the revolution in Cuba and internationally. Neither imperialist intervention nor capitalist restoration controlled by the Cuban state offer any solution to the problems of the working people of Cuba. Only the path of permanent revolution, internationalism and socialism with working class democracy can guarantee the future of the Cuban people. This will be possible if, based on lessons drawn from the current situation, the most conscious sectors of the working class, the youth and the intelligentsia advance toward building a truly revolutionary socialist party in the country.