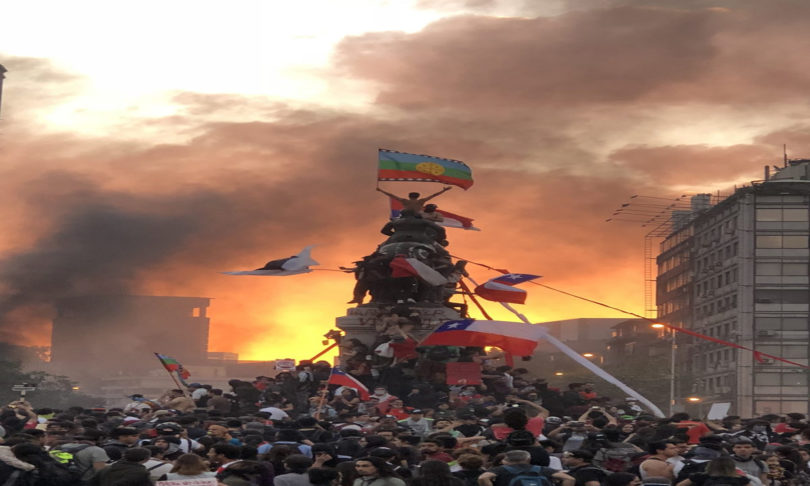 The events that we have experienced in the last few days are of a historical magnitude, to contribute with an assessment and perspective of the rebellion in the middle of its development has the limit of the speed of events, which will undoubtedly decant with time. Even so, there are some certainties, political positions and necessary clarifications that we must pose in the face of the greatest process of the last decades that our country is experiencing, especially among those who are active in the rebellion. What began in response to a rise in the metro fare, has the government and the regime inherited from the dictatorship against the ropes, and is facing the state of emergency in a process that questions everything.

Prior to the outbreak, Piñera spoke of the country’s social and economic stability, emphasizing its institutional strength, calling Chile an “oasis” in the region. Those were the days of the Ecuadorian rebellion and the Peruvian political crisis. Those words generate a framework that explains why most traditional political parties are “surprised” by the uprising. The spontaneous radicalism and massiveness of the mobilized people opposed the structural framework that has remained from the dictatorship to the present day with a force that, in addition to the characteristics mentioned above, also presents another characteristic factor: it does not have a clear leadership.

This situation is not isolated, that surprising factor can be seen from two points of view.

A) The world situation is experiencing a social polarization since the economic crisis erupted in 2008 that has not yet closed, while a new recession of similar or superior features is foreseen in the short term. Hence the attempts of big business to drive through a series of austerity measures and to tighten democratic limits in order to implement them. This offensive becomes the gunpowder of global rebellions: Hong Kong, Lebanon, Iraq, Catalonia. In Latin America, this is enhanced by the intervention of the IMF to overcome the economic crisis. Ecuador is an example of a sharp response, while the economic and political crisis deepens in Argentina, Peru, Brazil, Haiti, Honduras and the student and workers´ struggles in Colombia and Venezuela begin to resume.

B) The particular situation of our country since the end of the dictatorship, passing through the “transition to democracy”, marked the social conditions that have prevailed over the last 30 years. Wild neo-liberalism has strained the limits of life, attacking the fundamental elements that sustain it, a high cost of living, indebtedness, low wages and poverty pensions, while the privatization of all fundamental rights supports the businesses of a small social percentage. There is also growing sexist violence and environmental crimes due to territorial dispossession. The increase of 30 pesos to public transport was the straw that broke the camel´s back, which is why the slogan became “it´s not 30 pesos, it’s 30 years”, in addition to extending nationwide. That is what is in crisis: all the political, economic and social construction that has governed since the Pinochet Constitution in a framework of maintaining a model of privatization and conservation of impunity, as well as sustaining the repressive apparatus as it was 30 years ago.

From the Evasion of Transport to the Social Outbreak

The immediate antecedent came through the high school students, who spent months protesting the advanced repression of the right-wing mayors who implemented Piñera and Aula Segura´s anti-democratic laws, a mechanism of rapid expulsion to disrupt student organization. That process of repudiation of repression, subsequently forged the bases for the protest against the transport hike, beginning with the high school students´ call to evade, which in fact meant showing up in large numbers at the metro stations to jump over the turnstiles. The protest quickly coincided with the widespread discontent, and people on their way to work joined the action.
That flame, ignited by the high school students, received a wide social acceptance, feeding what would be triggered on October 18, the “Friday of fury”. The evasions transformed into a semi insurrection in which metro stations were occupied, then burned. People gathered in barricades outside the stations throughout Santiago, which become a city controlled by the demonstration. That outbreak was driven by the high school students and triggered by the brutal repression against them by Special Forces in the metro stations during the week of evasion. From that moment, the response against the transport hike began to protest against the entire system of capitalist appropriation based on the accumulation of the basic services business and the driving of debt to ensure its consumption, questioning, in turn, the repression that serves as guarantor for sustaining the lucrative private business.

Events since then have passed through a massive uprising the following days without declining in massive turnout, while the government chose to invoke all the laws that the dictatorship created: laws of State Security and State of Emergency, occupying the streets with the military by virtue of the attributions that the law allows them, that is to say, to assassinate, torture and limit democratic life to the curfew. The balance sheet of injured, tortured and dead are unknown due to the information quarantine that the official media has built.

This situation was described by Piñera as “a war against a very powerful enemy”, trying to lay the foundations for a brutal repression. This policy did not give him the desired results, because the process did not limit the social outpouring, even with military on the streets, strengthening the central characteristics of the uprising, its spontaneity without political leadership that unleashed a radicalized protest against the established social regime. On this basis, the government in the last two days has had to try to change the axis of its discourse – always with military on the streets – to implement social measures, from freezing the transport hike to discussing an increase of pensions. Measures that fail to reduce the mobilization, because they imply state subsidies to the private sector without demilitarizing the country. Therefore, the accumulation of slogans heard on the streets is not based on one or another demand, but go from demanding that the military retreat from the streets to Piñera resigning, central slogans that put the current system in check at each point of the protest.

Social Reserves of a Jaded People, Leaderships Integrated to the Political Regime

What is certain so far is that no political leadership has been able to control the process. The protest outpaced all leaderships, raising barricades throughout the country and insipiently building spaces of self-organization. In that framework, the leaders of the Communist Party (PC) and the Broad Front (FA) chose to distance themselves from the process during the first days of its development, and had to – under pressure – begin assuming a role when the mobilization questioned the entire political regime.

In other words, the PC and the FA, who maintain a common front, “Social Unity”, integrated by the CUT, the College of Professors and ANEF, among other important unions, student organizations and social movements, opted out of the October 21 strike called by a group of organizations, including the Port Union, which became a true milestone in boosting the mobilization, a massive day that took over the main cities of the country.

In the heat of the event, Social Unity called for a strike on Wednesday, October 23, and Thursday, October 24. The 23rd with centralized demonstrations, as one would expect, was a historical event, constituting in some regions the biggest mobilizations to date. On the 24th councils to promote a “constituent process” were called.

The change in the policy of the PC and to a lesser degree the FA, responds to the enormous process that the Chilean people have been developing at a massive level. In a contradictory situation, Social Unity had to advance in taking a positive step – calling a general strike – though without giving it continuity until the military leaves. Simultaneously, Social Unity has continued pushing its agenda in Congress, such as the decrease in the working week from 45 to 40 hours. All of this while announcing a constitutional accusation against Piñera.

The limits of this leadership that entered the process late are clear to us, the history of the PC has a negative balance sheet. They participated in the transition to democracy without questioning the economic, political and social model that was imposed by the dictatorship, and integrated itself to the regime at that level, a fact that aborted not only changes to the Pinochetist framework, but also enabled the impunity of all the genocides.

Today the policy of the PC together with the FA is an attempt to reconcile the social uprising and anchor it to Congress. It must be said that they have continued to legislate, in other words, supporting the crumbling regime and allowing Piñera to remain in power by affirming Congress as a gear of the government. That is why this policy must be countered by maintaining a self-organization independent of those who have been in power, while “Piñera must go” should continue to be raised in the street to advance toward a free and sovereign constituent assembly, sustained by the permanent mobilization of the people, he youth, women and the LGBT movement, together with the working class. A policy that the PC-FA block wants to avoid, since the “new constitution” they propose is tied to the advancement of the CUT slogan of a “new social pact” and what the PC says in its October 23 statement, when it sustains that the only possible authority is Social Unity as a representative of the process, establishing this to anchor the constitutional accusation against Piñera, that is, to remain in the institutional parliamentary framework with the same politicians as always.

The State of Emergency, Piñera and the Entire Pinochet Regime Must Fall, We Need a Free and Sovereign Constituent Assembly

What is coming will depend on the social strength to maintain the mass mobilization that has been expressed and demand the continuation of the effective general strike to oust the military and Piñera, the immediate tasks that the mobilized people demand.

It is on this matter that we must, in each instance of self-organization born out of the heat of the process, begin a process of deliberation about how to rethink the country, use with the social strength that has prevailed to impede the PC and FA leaderships from guiding the people´s revolt through Congress, as we would continue, in that case, to be lied to the undemocratic parameters of the dictatorship’s inheritance.

Therefore, our stance in the now is to maintain the continuity of the strike, to propose the instances of self-organization as the basis of a constituent process to discuss everything, dismantling the Pinochet heritage and founding a new country based on the social demands that lead us to a socialist solution. Piñera and the entire regime inherited from Pinochet must go. For a free and sovereign constituent assembly in which we would promote:

The current situation and our perspectives are framed by the popular rebellion that is casting away all the inheritance that the ex – New Majority, the PC and the right had cemented. Therefore, maintaining the rebellion until the repression is stopped and Piñera is ousted, will be central to disrupt the dictatorial regime and build the foundations for a new country, born out of the irruption of the will of the people that take to the streets today.

Our proposal is in tune in the construction of a revolutionary, anti-capitalist, feminist, environmentalist and socialist political tool to transform society completely. This is what we need to fight against the entire political regime and storm the heavens. More than ever, we need to build these proposals to face what is coming. From the popular rebellion to the construction of a new society, join Movimiento Anticapitalista to make the necessary possible.