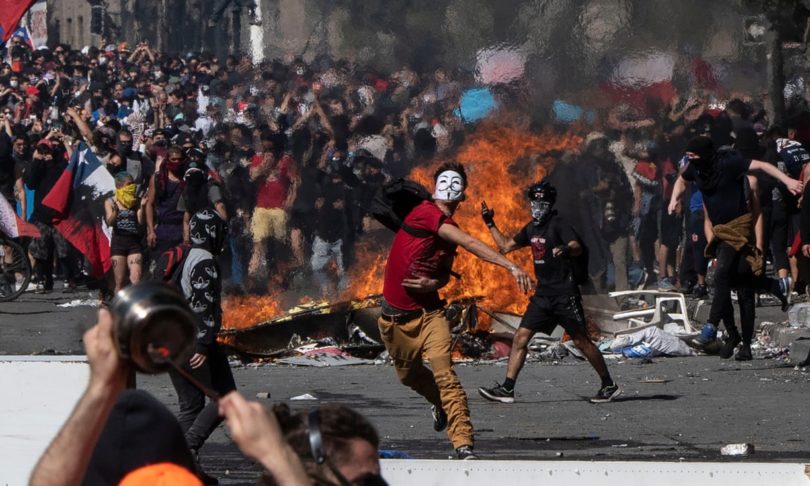 “This is not for the 30 pesos, this is for the 30 years”
(symbol slogan for the social upheaval in Chile)

A few months ago, the political landscape in South America was scary. A neo-fascist leader had just been elected president in Brazil, the neoliberal right-wing ruled Chile, Argentina, Colombia, Peru and Paraguay, the president-elect in Ecuador sharply turned right, the United States sponsored a violent coup in Venezuela, and many analysts predicted the electoral victory of the right-wing in Uruguay and Bolivia.

Thus, the region seemed to move hopelessly into the darkness of neoliberal reactionaryism. But that had not been agreed with the masses. The first sign came from Argentina, where the massive mobilization of women and the strong resistance of workers in recent years has prevented attacks on social rights and put the right-wing government in crisis. As a result, Macri is about to suffer a humiliating defeat in Sunday’s (27 Oct) elections.

Another sign came up in Venezuela, with the failure of Juan Guaidó’s coup attempt, which was articulated by Trump and the local bourgeoisie, with explicit support from the continent’s reactionary governments. The vast majority of the Venezuelan people, even dissatisfied with Nicolás Maduro, rejected the American imperialist intervention in their country.

But it was in the last two weeks that the most spectacular events took place. First, it was the indigenous and popular uprising in Ecuador against the economic package decreed by Lenin Moreno’s government in agreement with the IMF. The powerful mobilization of the Ecuadorian people faced a barbarous repression by the Armed Forces and Police, which killed several people. Even with the state of exception, the social revolt did not retreat and made the government cancel the main measure of the package, the increase of fuel prices.

No one expected, but Chilean youth decided to continue the rebellion in Ecuador. Soon after the government imposed an increase in Santiago’s underground fare, thousands of students began to turn around and protest. The youth action spread to precarious workers and the poorer population of the peripheries. With the brutal repression unleashed by President Sebastián Piñera – which has led to at least 19 deaths and thousands of prisoners, thus reviving the method of Pinochet’s bloody dictatorship – the revolt spread and radicalized across the country.

Despite the establishment of curfew and the army’s occupation of several cities, the revolutionary mobilization did not stop. On Wednesday (23), a powerful general strike stopped the country. On Friday (25), the largest demonstration of the last 40 years took place – in Santiago alone more than 1.2 million people took to the streets. The Chilean people call for kicking out the government, structural social reforms and a popular constituent assembly to bury neoliberalism and dictatorship’s authoritarian heritage.

The common backdrop to these processes of social upheaval (which also occurs in various other parts of the world, such as Haiti, Lebanon, Iraq, Honduras, among others) is the sharp rise in social inequality and wage tightness, the imposition of measures that impose greater hardships on the lives of working people (such as rising transport tariffs), rising household indebtedness, lack of youth’s perspective on education, employment and income, miserable pensions, worsening services privatization and the withdrawal of rights.

Despite the particularities of each country, there is a reality shared by the Latin American peoples: while the working majority lives the hardest squeeze, not knowing if the salary will come at the end of the month, a small minority who do not work enjoy great fortunes and privileges. Instead of penalizing the rich, governments attack precisely the exploited and oppressed majority. In the feeling of profound injustice lies the trigger for social anger.

Faced with the social upheavals in Chile and Ecuador; the imminence of Macri’s defeat in Argentina; and from Evo Morales’ new electoral victory in Bolivia, questioned by the right wing, Latin American elites, the extreme right of the region and US imperialism are working together to prevent the expansion of the mass struggle that is being questioned. your domination. On a trip to China, Jair Bolsonaro said the protests in Chile were “terrorist” acts and asked the Brazilian Armed Forces to prepare for similar actions here. The Organization of American States (OAS / OEA), in turn, blamed, without providing any evidence, Venezuela and Cuba for destabilization in countries of the continent such as Chile, Colombia and Ecuador.

If our enemies are organized to counterattack, it is time for the Latin American left, the women’s, indigenous, peasants, trade unions and student movements, in short, for all the social activists, to step forward. The first task is to provide active solidarity for the triumph of the struggle in Chile and Ecuador, defeating brutal repression. The second is to strengthen unity to fight in each country so that we can defeat neoliberal plans and reforms, as well as the governments responsible for their implementation. The way is to follow the example of the Chileans and Ecuadorians: in the streets, with mass mobilizations, it is possible to win.

Finally, we need to discuss the strategy and program that are necessary for a real change. The horizon cannot be the repetition of the governments based on the collaboration with the right-wing parties and the bourgeoisie. The governments of the Socialist Party (PS) in Chile, the Worker’s Party (PT) in Brazil, Peronism in Argentina, Evo Morales in Bolivia, the Frente Ampla (Broad Front) in Uruguay, Chavism in Venezuela, despite some progressive reforms and measures, have not changed the economic, social, and political fundamentals of capitalist exploitation and oppression that bind Latin American countries to underdevelopment and enormous social inequalities.

With the winds blowing from the streets of Santiago and Quito, it is time to take up a strategy of confronting American imperialism and its agents in Latin America, breaking with the dominant order and a program for the working and oppressed majority, without reconciling with the regime and the parties of the few, and not the many.