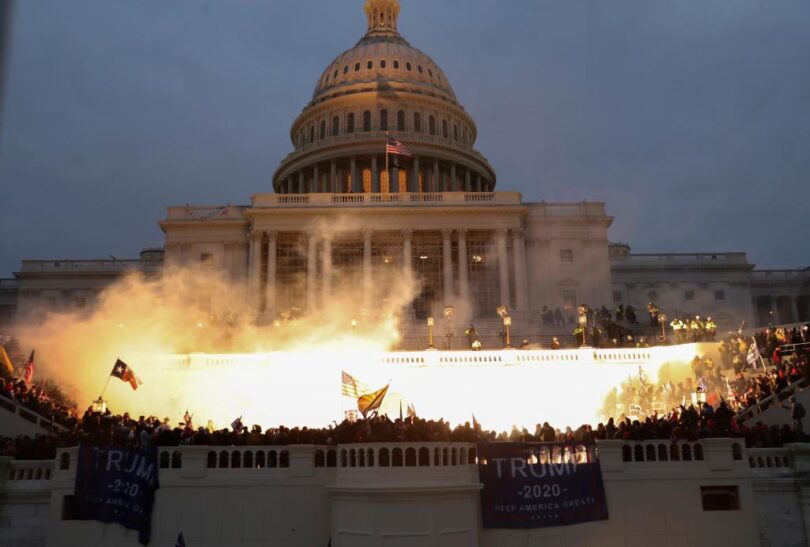 The joint session of Congress to count the Electoral College votes had to be interrupted when a mobilization of Trump supporters stormed the Capitol. The scenes of chaos reflect the deep political crisis unfolding. Following his defeat in November, Trump has insisted on ignoring the outcome despite the repeated failure of his attempts to overturn it. This has deepened the crisis of the Republican Party and the regime. Meanwhile, in Georgia, the victory of the Democratic Party in the run-off elections for the Senate seems confirmed, a fact that would give this party control over the chamber.

The so-called “March to save America” ​​gathered thousands from the early hours of the morning. Trump spoke to the crowd around noon, repeating his accusations of electoral fraud and telling people not to concede and to march towards the capitol. Hours later, clashes broke out around the Capitol and a group entered the building, reaching the Senate floor. Members of Congress were evacuated, a curfew was declared and the mobilization of the National Guard was expected. Trump tweeted a message from the White House calling on the protesters to return home.

The Failure of the Campaign Against the “Fraud”

After a series of setbacks in his legal challenges, and after the failure of his efforts to pressure state legislators and Republican governors to stop the recognition of the electoral results, the fury and despair of Trump focused on today’s session. His pressure on Vice President Pence, who chairs the session, and the Republican members of the House and the Senate was on the rise, getting a large group of Republicans in congress to commit to expressing their observations on the electoral result, without this opening any legal possibility to overturn the results.

The campaign against the alleged fraud strained the internal situation of the Republican Party to the maximum, deepening its conflicts. Several newspapers ran opinions from prominent conservative voices expressing the need for a new party. Republicans who hold office were divided between the desire to uphold the institutional framework and pressure from Trump and a radicalized Right wing base that took to the streets today.

This dispute had an effect on the senate run-off in Georgia. Trump has waged a particularly strong campaign against the Republican state authorities for having certified the result favorable to Biden. A few days ago, an audio of a telephone conversation between Trump and the Georgia Secretary of State was made public. In it Trump demanded a recount to find the more than 11 thousand votes necessary to turn the result around. Added to this was the repudiation of Republican senators for refusing to pass the $2,000 direct pandemic relief checks. Although confirmation is still pending, all of this appears to have led to a defeat for the Republican candidates in Georgia. The Senate would thus be tied 50-50 between both parties, giving the tiebreaker to Vice President-elect Kamala Harris and the presidency of the chamber to the Democratic Party.

In recent months, there has been much talk about the possibility of a “coup” in the US. It was one of the central arguments of the Democratic Party and its progressive wing to get out the vote for Biden. A significant part of the Left made the same argument and called for a vote for the Democratic Party candidate. However, we have seen the failure of attempts to reverse the electoral result. No relevant fraction of the ruling class or the state apparatus supports these attempts. The last confirmation of this came a few days ago when the 10 living ex-Pentagon chiefs signed an opinion piece warning against any breach of the constitutional process.

Today’s events are not a coup, but they are not a passing issue. The fact that they will not interrupt the inauguration of Biden does not mean that they are not a clear symptom of the dynamics of the political situation. The political polarization of the last decade has seen a radicalization towards the Left, but also the development of far-right, proto-fascist currents, which have demonstrated their capacity for mobilization and have support among the ranks of the repressive apparatus.

Today’s action is a preview of what may come. Faced with a Biden government that will seek a restoration of neoliberal “business as usual”, in a scenario of deep economic and health crisis, the Right will seek to take the initiative. Trumpism will be a permanent actor in the time to come.

Faced with this scenario, the response from the Left is urgent. It is necessary for the Left to appear as an independent alternative on the national stage, as an alternative to the polarization between a neoliberal Democratic Party government and the Right. Not to take up this task means leaving a path wide open for the development of fascist elements. To do this, the socialist Left needs to build its own party, a Socialist Party independent from the democrats. The DSA and the whole of the Socialist Left must organize the response of millions against the Right, and build this political tool.