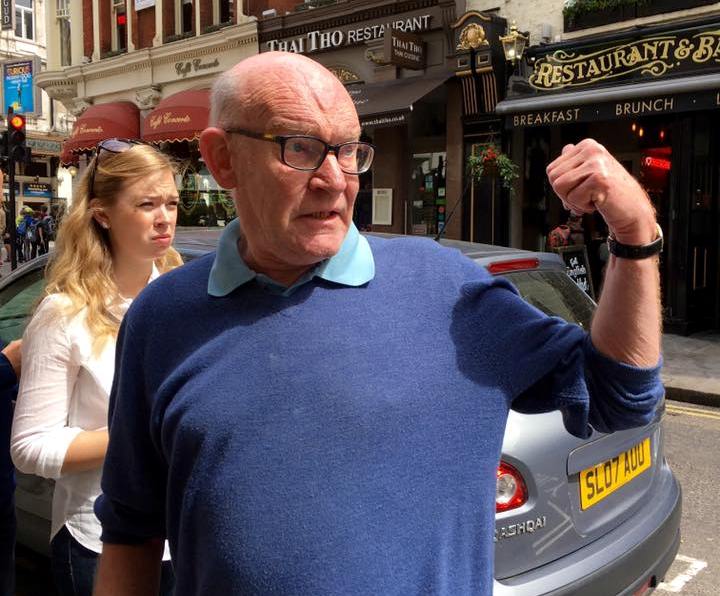 It is with great sadness that we have heard of the death from Covid, of the Marxist economist, educator and activist, Mick Brooks. Mick was well known on the Marxist left of the labour movement as a regular speaker and writer on political issues in general, but especially on Marxist economics.

In 2012, Mick published Capitalist Crisis, Theory and Practice, which is an excellent explanation of Marxist economics and the causes of the economic crash of 2008. Economics is never a simple subject, but Mick could put it across in a language that was easily accessible to any labour movement activist. More recently, in collaboration with Michael Roberts, he wrote a pamphlet, on behalf of the Fire Brigades Union, arguing for the nationalisation of the banks: It’s Time to Take Over the Banks.

Mick was an accomplished writer and speaker, with the ability to make complex ideas understandable. He had his own quirky sense of humour, which he used to lighten the discussions in which he participated. It was hard not to like Mick personally. Unlike too many in the movement, Mick had no airs and graces and wielded no great ego; what you saw was what you got, an honest activist and a teacher of socialist theory and ideas. He took ideas and political education seriously, but he was a man with a twinkle in his eye and dry sense of humour.

Mick more than played his part in building and educating the labour movement and he will be a great loss.

Barbara Humphries writes, Mick was born in Eastleigh, Hampshire, one of five children. His father was a French polisher and mother a housewife. He went to the local grammar school and then on to Chelmsford Polytechnic where he studied law. However, he soon discovered that his real passion was politics. Like many young people at the time, he was politicised by the war in Vietnam and went on many anti-war demonstrations. He joined the Labour Party Young Socialists (LPYS) as a teenager. He moved to Acton in the late 1960s.

Mick motivated many people to get involved in political activity. He always regarded himself as a Marxist. He was able to explain in simple terms the importance of Marxist economics and how the capitalist system works. He wrote regularly for socialist publications, including Labour Briefing.  Days before he was admitted to hospital, he was planning to write an article on the government’s Brexit deal.  In 2012 he wrote a book on the causes of capitalist crises. He had a sharp sense of humour which endeared him to many comrades.

Mick was also consistently active throughout his life in the labour movement. He was secretary of the Ealing Anti-Poll Tax Federation in the 1990s. More recently he was chair of the West London UNITE community branch and active in the Ealing Save our NHS Campaign, attending street stalls, demos and lobbies on a regular basis. He was the political education officer for the Ealing Southall constituency. Last year he organised a public meeting to commemorate the 40th anniversary of the death of Blair Peach.

I have known Mick for over 40 years. We first met when he was speaking at a meeting of Acton LPYS in 1971 on child poverty. I was then a student at Sussex home for the holidays. We got to know each other when I moved back to west London. He was my partner and soul-mate in every sense of the words. He supported and inspired me and many others and indeed made us what we are.

Michael Roberts writes, I have known Mick and his partner, Barbara, for over 50 years, since my student days. Back in the day, Mick and I were united in defending Marx’s economics ideas against all comers. And Mick published in 2012 a much-underrated book, Capitalist Crisis: Theory and Practice, which speaks with clarity on Marx’s theory of crises. (It can be found here).

Mick was an excellent expounder of Marxist political economy to labour activists and a dedicated activist himself, along with Barbara, and above all, a man who would always be there if you were in trouble. This a significant blow to British and international socialism and to me.

Matt Wrack, General Secretary of the Fire Brigades Union, writes: We are so sad to hear of the death of Mick Brooks. His contribution to the labour movement will be greatly missed. Mick was the co-author of a pamphlet commissioned by the FBU which made the case for public ownership of the banking system. Alongside this, he had also delivered education sessions to FBU activists on economic issues. He brought his knowledge and a sense of humour to these discussions, which enabled him to engage workers in lively debate on complex issues in a friendly and encouraging way.

I first met Mick when I was a member of the Labour Party Young Socialists. He will be remembered by many of my generation as someone with a wide understanding of the issues affecting our movement. He knew history, philosophy, economics and political theory and could discuss them all in ways which would engage people whether they shared his knowledge or not. He was clever, witty and humble. Above all he remained a Marxist and a socialist activist all his life. He will be very much missed.

Mark Langabeer writes, I regarded Mick as one of the most important contributors of Marxism in Britain. When I first got involved with the Labour Party Young Socialists in the late 70s, Mick was often a principle speaker at LPYS summer camps and regional education schools. If Mick was speaking, you went, because he was such a good communicator of socialist ideas. He would explain Marxist ideas in a simple manner and had you laughing at the same time.

Few had Mick’s grasp of theory, and even fewer had his ability to communicate the ideas of socialism. He always added humour and you were never bored when Mick spoke. Mick was a modest man, who enjoyed the odd pint and in his younger days the occasional small cigar. Never a guy to blow his own trumpet, despite his obvious talents. I never heard anyone say a bad word about him. He was respected by all and his passing is a big loss to the labour movement.

Heiko Khoo writes, Mick Brooks was a revolutionary whose whole adult life was dedicated to the development and exposition of Marxist ideas. He was active in the Militant Tendency, the International Marxist Tendency and in the Labour Party. Over the last eight years, we worked together running the Karl Marx walking tour.

I first met Mick around 1983 at the offices of the Militant newspaper in Mentmore Terrace, near Bethnal Green in London. I believe he was in charge of the bookshop at the time. To the casual observer Mick appeared to be aloof rather than inviting, and he was more than a little insecure when circumstance compelled him to engage in small talk. But this same Mick was transformed when he rose to speak at meetings, where his character, energy and strength resonated around the room. He would speak with clarity, authority and certainty, drawing on classical references from Marxist theory and weaving this into a clear and coherent analysis of the contemporary world.

Mick would not speak for the sake of speaking, but always to provide some unique view, or nuanced analysis of events. When Mick rose the emphasis in the discussion often changed course. His didactic skills in Marxism were used to explain the most complex theories in the most simple language possible, without ever compromising on precision.

Thus, Mick’s book Capitalist Crisis: Theory and Practice was designed to address the difficulties that readers have with reading something like Marx’s Capital. Indeed, when Capital was about to go to press, Engels wrote to Marx complaining about the long chapters, about ideas not being fully explained or reinforced before moving to a new concept, which made reading Capital into a struggle. No such difficulties exist for the reader of Mick’s book.

During bitter internal conflicts in the Militant Tendency and later in the International Marxist Tendency, Mick naturally inclined against bureaucratic and personal intrigues. He always remained on the high ground of theoretical analysis. And when these Marxist political groups adopted views that he found to be in contradiction to his interpretation of basic Marxist theory and practice, he would express exasperation.

He soldiered on inside the Labour Party’s left-wing faction the Labour Representation Committee, and what became its official magazine, Labour Briefing. For many years this relatively tiny organisation, composed mainly of older comrades, was directly linked to the Jeremy Corbyn/John McDonnell faction. Despite all the ups and downs of the Corbyn wave and its eventual defeat, Mick continued to doggedly pursue work in the LRC and Labour Briefing.

Mick’s dedication, motivation and energy, despite innumerable setbacks, is unique to those with an eye and sense for the broad sweep of historical processes. Drawing on the insights available through Marxist research, writing, and practical intervention in struggle, Mick stood as if on a mountain top, observing the motion of the masses with an almost other-worldly objectivity.

In April 2012, Mick led our very first Karl Marx walking tour with 4 students in attendance. They were delighted with the tour. Since then, we ran tours at least once a week, meeting many thousands of people from every corner of the world. Mick’s special didactic skills helped people at all levels of knowledge to grasp in a couple of hours what it might otherwise take weeks or months to learn. He drew on his entire life’s experience to furnish his exposition with the same precision and didactic clarity that marked his character and work.

It was always a pleasure to see Mick walking around Soho followed by a crowd. Often, in the British Museum’s Enlightenment Gallery, when he summarised the life and ideas of Marx, a cheeky sparkle flashed in his eye, as he drew Marx’s life story to an end. The story of Marx’s death was always followed by an affirmation of the vitality of his ideas.

A great deal of Mick Brook’s written work was published in pamphlets and documents that are no longer in print or circulation. Over the next months, I hope we can make much of his work available online.

John Pickard writes, I knew Mick right back in the old days when he was a full-timer for Militant, where he worked at the publishing centre. There was nothing flippant or casual about Mick. He was a hard worker and someone who made a valuable contribution to the production of that paper and, particularly to its distribution. He was the go-to speaker when you wanted a good discussion or political education on the basics of Marxist economics or on Historical Materialism and his style of presentation was always his own: crystal clear, understandable and, as often as not, funny.

There have been many tributes made to Mick, including this one from the Labour Representation Committee, where he was Political Secretary. There are too many names to mention all those who have contacted us and paid personal tributes to him, and that in itself speaks of the great respect in which he was held in the labour movement.

Awais Qarni writes, Mick’s articles, specially on the international perpectives and Marxist economics, used to be translated into Urdu and published regularly in The Struggle‘s fornightly paper. He, directly and indirectly, played a great role in the building of marxist forces in Pakistan and around the world. The terrible news of his demise is indeed a huge loss for the Marxist forces around the world. He’ll always be remembered in the struggle for Socialism.

The Struggle along with Left Horizons editors, on behalf of all contributors and readers, extend condolences to Mick’s lifelong partner and comrade, Barbara Humphries, and to all his wider circle of friends and family.