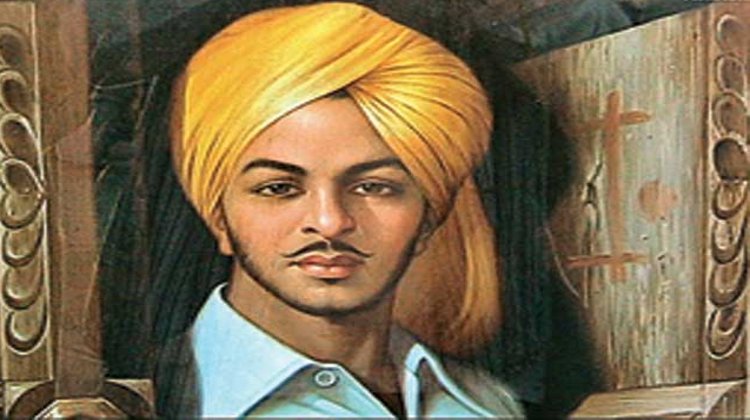 Revolutionary struggles erupt with their own dynamics. Such legacies and struggles are often symbolised by iconic figures. According to the mainstream myths, Gandhi, Jinnah, Nehru and other such leaders belonging to the native bourgeois fostered by the Raj led anti-colonial struggle in the Indian subcontinent. This generalised narrative is far from the truth. In reality, the movement had a clear class differentiation. Had the bourgeois leaders not been facilitated and propelled by the Raj and mainstream media as the central leadership at the helm of the anti-colonial struggle, the liberation movement would not have stopped at the stage of “national liberation.” Likewise, had the Communist Party of India played a revolutionary role to overthrow the Raj, there would have been a different outcome at the departure of the British. It is important to remember that the workers, youth, personnel of the armed forces and the peasants were active in the movement. One of the most significant names that symbolises this revolutionary current of the liberation struggle was “Bhagat Singh”.

Eighty-eight years ago this renowned revolutionary icon of the mass revolt was assassinated, along with his two comrades, through the gallows at Lahore’s Central Jail by the British imperialists. He was only twenty-three years old. “Legally” the executions were to be carried out on 24 March 1931, but such was the fear of a mass insurrection amongst the imperialist masters that the three prisoners were hanged a day earlier, March 23, in the evening at 7.30 pm.

Bhagat Singh along with his comrades in arms Sukhdev and Raj Guru were not just hanged but their bodies were mutilated and later burnt in the wee hours of that tragic March eve. This was a cowardly act of vengeance by the mightiest imperial power of its time. The Central Jail Lahore was later demolished and no memorial or commemorative plaques of these valiant revolutionaries exists at the site, now known as Shadman Chowk. Despite these acts of erasing the memory of these revolutionaries to quell the inspiration of their struggle, their revolutionary legacy lives on and continues to motivate the vanguard of the new generations in this subcontinent.

A few months before his hanging on the gallows, Bhagat Singh had written in a pamphlet titled ‘Why I am an atheist’:

“I know the moment the rope is fitted round my neck and rafters removed from under my feet, that will be the final moment…. With no selfish motive, or desire to be awarded here or hereafter [in after-life], quite disinterestedly have I devoted my life to the cause of independence, because I could not do otherwise. The day we find a great number of men and women with this psychology who cannot devote themselves to anything else than the service of mankind and emancipation of the suffering humanity, that day shall inaugurate the era of liberty.”

Bhagat Singh’s legacy is tarnished and distorted on both sides of the Radcliff Line by the reactionary politicians and elite’s intelligentsia. This attempt to mould the history is aimed at distracting the toiling classes from treading the path of Bhagat Singh’s revolutionary legacy. In India, the portrayal of Bhagat Singh is no less incongruous. The Sikh fundamentalists have turned him into turban wearing devout Sikh while Sangh Parivar exploits his iconic figure to justify their nationalist chauvinism. An irony in the case of fundamentalists is, a devoted Marxist, Bhagat Singh, struggled irreconcilably for a socialist revolution as the only real road to the liberation of the Indian subcontinent.

At his death anniversary last year, on 23 March 2018, Narendra Modi stated, “The martyrdom of Bhagat Singh, Rajguru & Sukhdev was a watershed moment in our history. Every Indian is proud that these three great men belong to our land.” This deceitful admiration for Bhagat Singh by Modi is an insult upon injury inflicted upon the ideology and legacy of Bhagat Singh that started with the tragedy of bloodied partition.

Bhagat Singh developed a Marxist approach in the white heat of the struggle and his intense study of the great Marxist teachers during his incarceration. On February 2, 1931, Bhagat Singh wrote;

“Revolution means the complete overthrow of the existing social order and its replacement with the socialist order… the state, the government machinery is just a weapon in the hands of the ruling class to further and safeguard its interest. We want to snatch and handle it to utilise it for the consummation of our ideal, i.e., socialist reconstruction on a Marxist basis.”

Already by 1928, Bhagat Singh had become a steadfast fighter for revolutionary socialism. He played a decisive role in changing the name of the party from the Hindustan Revolutionary Army (HRA) to Hindustan Socialist Revolutionary Army (HSRA). In Raj Kumar Santoshi’s well-researched film, The Legend of Bhagat Singh (2002) Bhagat in a speech on the outskirts of Delhi says: “We don’t want independence! We don’t want independence where the English rulers are replaced by the local ‘brown’ elites. We don’t want freedom where this wretched system of exploitation and slavery continues to torment the toiling classes. We are striving for independence that would transform this cruel system through a socialist revolution.”

The Bhagat Singh archives contain a newspaper report: “On January 21, 1930, the accused in the Lahore Conspiracy Case appeared in the court wearing red scarves. As soon as the magistrate took his chair they raised slogans ‘Long Live Communist International’, ‘Lenin’s name will never die’ and ‘Down with imperialism’. Bhagat Singh then read the text of the telegram in the court and asked the magistrate to send it to the Third International.”

During the national liberation movement, Bhagat Singh’s revolutionary struggle had threatened the stranglehold of the native bourgeois leaders at the helm of the engineered political spectrum. The orders of his execution by the Viceroy of India at the time, Lord Irving, had the tacit approval of Gandhi.

In Pakistan, the Islamicist fundamentalists and conservative right condemn Bhagat Singh as a kaafir (infidel) and a terrorist. His Sikh ancestry is abused and ideological convictions deprecated to undermine his inspirational struggle for successive generations. The accusations of him being a terrorist do not stand up to the facts of history.

From the prison Bhagat Singh wrote in, An Autobiographical Discourse, “The romance of the violent methods alone which was so prominent among our predecessors was replaced by serious ideas. No more mysticism, no more blind faith. At times of terrible necessity, we can resort to extreme methods, but violence produces opposite results in mass movements.”

In the present epoch, the South Asian subcontinent’s more than a billion and a half inhabitants are suffering from immense misery, poverty, unemployment, disease and an excruciating deprivation. The capitalist democracy and its socioeconomic systems have devastated society and pulverised the masses. There is a seething revolt in the wombs of these societies despite the reaction that dominates the region at the present time. The youth from the toiling classes are yearning for a way-out from this agony and destitution. From reformism to religious bigotry, every turn and twist in politics have only made the situation worse for the ordinary people. No less than a revolution can resolve even the basic of the issues. Sooner rather than later the youth will spearhead a movement that will inspire hundreds of millions of the workers and the oppressed masses into a revolutionary class struggle. For the young revolutionaries, Bhagat Singh’s message given to the youth of his day resonates in its truthfulness today, In a letter “To the young political workers” Bhagat Singh wrote in February 1931,

“Leave sentimentalism aside. Be prepared to face the facts. Revolution is a very difficult task. It is beyond the power of any man to make a revolution. Neither can it be brought about on any appointed date. Special environments, social and economic, bring it about. The function of an organised party is to utilise such an opportunity offered by these circumstances. [To] prepare the masses and organise the forces for the revolution is a very difficult task. And that requires a very great sacrifice on the part of the revolutionary workers.”