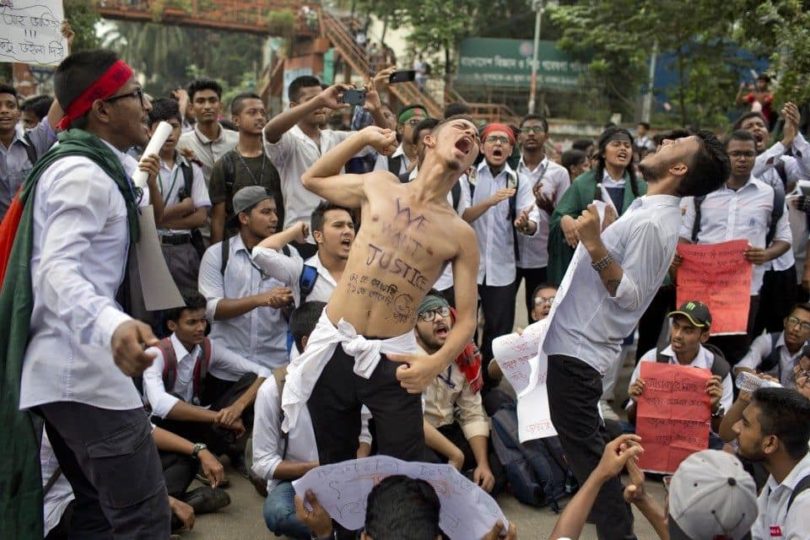 The students’ movement that erupted on 29 July following the death of two students in a tragic road accident in Dhaka spread to almost all the major cities of the country. Thousands of outraged school and college students laid siege to the streets of the capital Dhaka for a week demanding road safety across the country. Within days its verve and militancy shook the despotic ‘democratic’ regime of Prime Minister Hasina Wajid’s Awami League (AL), the party of Bangladesh’s national bourgeoisie. This movement yet again demonstrates that the molecular processes in the womb of a society in crisis and the socioeconomic contradictions seething below the surface can abruptly erupt into a volcanic explosion. Any major event or issue can trigger the outburst of accumulating grievances of youth and the hitherto inert oppressed. The issues may or may not be directly linked to the class struggle.

The regime came out with naked brutality to crush the students’ heroic movement. A university student told Bangladesh’s Daily Star newspaper on condition of anonymity:

“At 12:30pm, police started firing teargas shells and some 25-35 men from the Bangladesh Chhatra League (BCL—the youth wing of the AL) started attacking the students. At that time the university authorities opened the gates and let the students in. A little later, goons kept trying to get into the campus and started hitting the main gate to break it. Some students tried to get back at them by throwing bricks. By around 1:15pm, fourteen students were seriously injured. We tried to get an ambulance but failed. The university authorities did not provide any transport. Then we arranged three cars, one belonging to a student and two to faculty members. Police were standing on the footpath, just looking away. From the second car, the attackers dragged the students out along with the wounded and beat them up. The students were first taken to Banasree Farazi Hospital. They did give first aid but would not admit them. The students went to a few other hospitals but the authorities there would not admit them either. Finally they managed to admit the wounded to a faraway hospital. Our backs were pushed against the wall.”

“A group of armed and helmeted Chhatra League goons, who were patrolling around the area from morning, launched the attack on journalists in presence of police. They beat them indiscriminately and broke cameras and other equipment.”

Another student of the NSU University told the Daily Star:

“We went there for the protests, but police and BCL men locked us inside the campus. The BCL men were carrying machetes, sticks and rods. They entered the cafeteria and threatened the students not to join protests. Eventually around 2 pm students were let out in groups of two so that they could not form large groups. The BCL members warned students not to join the militant EWU students. However, some students headed towards EW University.”

Although these protests seem to be losing stream, due to the movement’s relative isolation from other oppressed strata of society, nevertheless it is a glimpse of the stormy events that impend in Bangladesh. 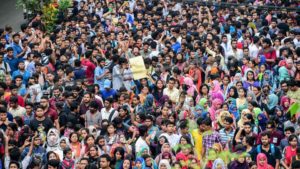 Despite the much-bragged high growth rates and fabricated statistics of poverty reduction, the conditions of the ordinary people of Bangladesh are in an abysmal state. There has been a sharp rise in inequality over the last four decades.  There is an increased level of poverty and rising unemployment, including disguised unemployment, poor working conditions and frightening homelessness. These economic woes are exacerbated by the worsening climate change. The coal mining and paper industry’s capitalist corporations threaten Sundarban the largest mangrove forest in the world.

Bangladesh still remains one of the least developed countries in the world.  An estimated 63 million out of a population of 163 million live in absolute poverty. There has been rapid urbanisation and poverty increase with more than a third of the population now living in urban areas. Bangladesh is one of the world’s most densely populated countries. This urbanisation has been spurred by the structural changes in the rural economy with increased commercialisation of agriculture and widespread rural poverty.

According to the IMF’s World Economic Outlook, 2017, labour income shares are now 4.0 per cent lower than they were in 1970. The rich hardly pay any taxes in connivance with the state. Crony capitalists, state bosses and moneyed politicians are entwined in an evil nexus Bangladesh’s ruling elite. The surpluses amassed by the rich are stashed away in safe havens abroad.

The country exports more than 20 billion US dollars’ worth of garments, its main exports industry, to 30 countries. Bangladesh is now the second largest apparel producer after China. There are 5,000 factories with 3 million workers, 80% being young women. Seventy per cent of factory owners are subcontractors dependent on foreign buyers.

Successive military and civilian regimes pursued policies of denationalization and export-oriented industrialization. Brands and retailers want their products cheap and fast, and push local contractors on price and lead times. To meet these demands, factory managers squeeze workers’ labour viciously, with little safety standards to cut costs and speed-up production. Unionists are fired – or worse. Governments look the other way; they need the business.

This results in aggravating poverty, lowering of wages, long hours and oppressive and dangerous workplaces. Most women workers get 37 dollars a month contract wage that is further eroded by inflation. These workers of the multi-billion dollar industry live hand to mouth, and often starve along with their children. The capitalist exploitation of women’s labour is interwoven with the patriarchal oppression that pervades the entire fabric of Bangladesh’s society. The bosses are doing their utmost to keep down the value of labour power (wages) and extend the amount of working time in a day that goes to producing more and more surplus value. The conditions in twenty-first century Bangladesh and many other ex-colonial countries are not dissimilar to the nineteenth-century conditions of workers described by Marx. Marx in Capital:

“The working day contains the full 24 hours, with the deduction of the few hours of repose without which labour power absolutely refuses its services again… But in its blind unrestrainable passion, its werewolf hunger for surplus labour, capital oversteps not only the moral, but even the merely physical maximum bounds of the working day. It usurps the time for growth, development, and healthy maintenance of the body. It steals the time required for the consumption of fresh air and sunlight. It haggles over a meal time, incorporating it where possible with the process of production itself, so that food is given to the labourer as to a mere means of production, as coal is supplied to the boiler, grease and oil to the machinery. It reduces the sound sleep needed for the restoration, reparation, refreshment of the bodily powers to just so many hours of torpor as the revival of an organism, absolutely exhausted, renders essential… Capital cares nothing for the length of labour power. All that concerns it is simply and solely the maximum of labour power that can be rendered fluent in a working day.” (Karl Marx, Capital Vol. 1, pp. 178, Progress Publishers, Moscow)

Apart from being viciously exploitative, Bangladesh’s bourgeoisie is corrupt and reactionary. There have been bloody military coups and democratic façades, with a constant instability and turmoil in society exhibiting the Bengali national bourgeoisie’s failure to develop a prosperous and progressive society. The army also continues to play an intrusive role in politics. With long stints of dictatorial rule, it has usurped massive wealth and owns huge chunks of the economy.

There have been strong left-wing currents in Bangladesh since its inception. Shortly after independence, the masses became disillusioned with the ‘national hero’ Sheikh Mujib, his AL rapidly lost support and began to splinter. In power it quickly became mired in corruption and nepotism, its radical promises went unfulfilled. Prices multiplied while wages dropped. The nationalizations that took place just allowed the political cronies to loot the expropriated companies.

The material demands of the uprising were lost — the Awami League only delivered on its more symbolic promises. In the sarcastic words of Bangladeshi writer Ahmed Sofa:

Split factions of AL’s student movement and left-wing currents organized the Jatiya Samajtantrik Dal (JSD, National Socialist Party). While Mujib ur Rahman had repressed the left, the right wing brought him down. On August 15, 1975, pro-US officers led by Major General Ziaur Rahman murdered him and most of his family. His daughter Hasina (now the prime minister) was in Calcutta at the time of the bloody coup.

In yet another military coup in early November 1975, Ziaur Rahman was overthrown and put under house arrest. Soon a soldiers’ revolt, which the JSD helped organize, overthrew the new military dictatorship. These left-wing young military officers had power in their hands; they could have abolished capitalism instantaneously, with revolutionary repercussions across South Asia. And yet they squandered this unique historical opportunity. Paradoxically, they freed Zia a few days later. Ziaur Rahman quickly turned on these socialist leaders of the left-wing coup, sentencing to death Abu Taher, a JSD leader and hero of the liberation war. Other JSD activists received long prison sentences. Zia’s widow Khalida is the leader of today’s right-wing opposition, aligned with Jamaat-a-Islami and other forces of obscurantism. Years later, when the brother of Abu Tahir, Fazal, was asked by the British Marxist Roger Silverman at a meeting in Calcutta why they handed power back to General Zia, Fazal replied: “We thought we were not prepared for the revolution and needed a transitional ‘Kerensky’ regime period to prepare and carry out the revolution.” This naïve lack of understanding of Marxist politics and strategy has cost millions of oppressed masses in Bangladesh and the region atrocious suffering and capitalist brutality for generations.

Despite these harrowing conditions of the life, workers and youth from the lower classes have launched innumerable struggles throughout Bangladesh’s recent history. The working class has a long and militant tradition of social struggles.. One of these glorious episodes was the students’ revolt of October 1990. Despite the regime’s brutalities, tens of thousands came out against the army and swore they would not give up until General Ershad resigned. The following month, pro-government militias attacked Dhaka University, but, after hours of fighting, they were driven off campus. Militant demonstrations and hartals spread throughout the country. Bangladesh was brought to a standstill by a complete general strike of the workers awakened by the students’ uprising. Peasants and agricultural workers, lawyers, teachers, doctors, and cultural workers also joined in. General Ershad had to finally resign in December 1990.

Some of the strikes of the women workers in the garment and textile industry have flabbergasted the world with their heroic struggle. They defied and smash the obstacles of their socio-economic plight to come out and fight for their rights: despite arduous work conditions, the terror of the state and bosses’ goons. Today, left ideas still resonate with those poised to fight, defeat and overthrow religious oppression, a despotic state and capitalism

In December, Hasina Wajid faces another election. In the 2014 elections, the AL regime manipulated pre-poll rigging. The right-wing opposition the BNP (Bangladesh National Party), led by the former military dictator’s corrupt widow Khalida Zia, boycotted the elections, calling them illegitimate. As a result very few people voted, the AL won 280 out of 300 seats. But this time round it will not be the reactionary bourgeois opposition parties that will thwart Hasina Wajid’s evil designs of regaining power in complicity with the army. The simmering discontent below can explode into a militant mass revolt that can cut across this vicious cycle of the rulership of these two reactionary bourgeois women. The present students’ uprising can become a harbinger for such a revolutionary upheaval.