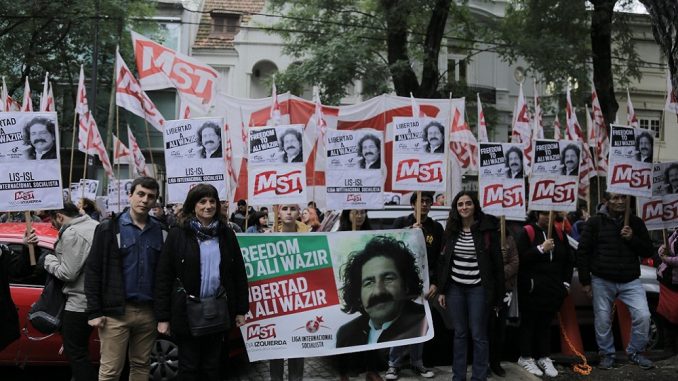 By MST Argentina – Seccion of the ISL

On June 14, the Socialist Workers’ Movement (MST), member of the International Socialist League (ISL-LIS) protested in front of the embassy of Pakistan in Buenos Aires, as part of the international campaign for the freedom of Ali Wazir.

Wazir has been imprisoned by the forces of the reactionary regime of Pakistan since May 26, after a brutal repression against a pacific mobilization that ended in the massacre of 12 people and several arrests.

Since then, the nascent ISL has been promoting an international campaign in solidarity with The Struggle, our sister organization in that country, of which Wazir is a leader and national representative.

In Argentina, the MST has collected hundreds of signatures of political, trade union, student, human rights and cultural figures, demanding the immediate freedom and the end of repression against the Pashtun people, the main victims of the regime.

We concentrated in front of the embassy and a delegation of our national leadership delivered a letter to the ambassador with a petition demanding the liberation of Wazir and the other political prisoners in Pakistan, accompanied by the signatures, making it clear that we will return as may times as necessary.

Vilma Ripoll explained to the mobilization the living conditions in Pakistan and the circumstances in which Ali Wazir was arrested, highlighting the need to strengthen the internationalist campaign for his freedom.

In the closure, MST leader Mariano Rosa highlighted the surprise that the ambassador expressed at this kind of activity taking place in such a remote country. So Mariano reminded those present that, for our organization, distance has nothing to do with kilometers, because we are the same class, and Wazir and the comrades of The Struggle of Pakistan are our comrades and we will defend them no matter their country. He also remarked the similarities between the tradition of the workers’ struggle in the Asian country and Argentina, and in current times, with both governments having recently signed agreements of austerity and repression with the IMF, that subjects our peoples to the desires of the imperialism.

This important activity does not mean the end, but a relevant milestone in a campaign that continues developing strongly in Argentina and in every country where the International Socialist League is promoting it.

Our compromise is to continue until we achieve the liberation of Ali Wazir and every political prisoner of the Pakistani regime, and of course the end of the repression and harassment of the Pashtun people.

One of the founding bases of the International Socialist League is promoting these kinds of campaigns with the objective of uniting the working peoples of the world against the governments, the regimes and the imperialist corporations and its lackeys. Now more than ever, this is the compromise of the MST.