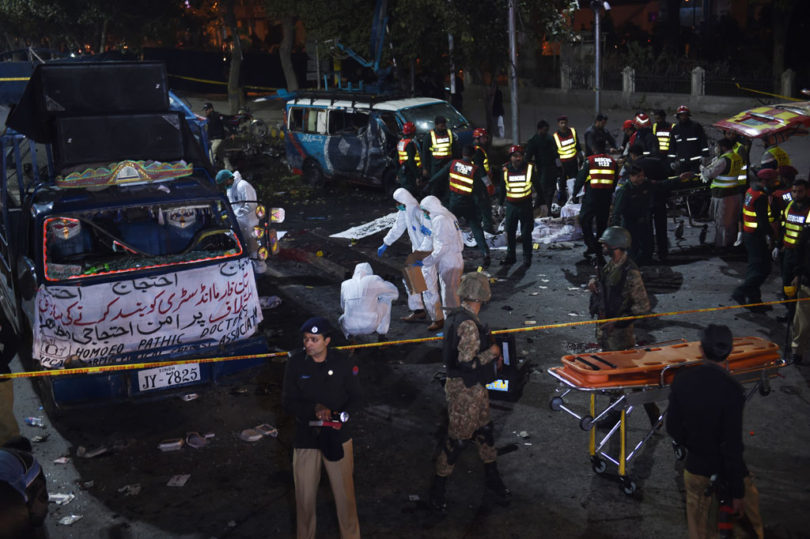 Lahore historically stood at the centre of the political, cultural and social life of not only Pakistan but also during the British Raj, the Sikhs and even the Mughal era. Hence it was no surprise to see the recent terror strike outside the Punjab assembly resonated far and wide nationally and internationally. The Pakistani Taliban faction Jamaat-ul-Ahrar claimed responsibility for the blast killing 13 people including seven police officers and six civilians. The group termed the heinous crime as “Ghazi Abdul Rasheed Operation” and declared this is “just the start”. In 2016, Lahore suffered one of Pakistan’s Jamaat-ul-Ahrar’s deadliest assaults when a suicide attack in a park on Easter Day killed more than 70 people, including many children. The group had also claimed that attack.

The pain and grief struck society far beyond Lahore. For the already traumatised populace suffering from misery and poverty, it’s yet another insult upon injury on their festering wounds this system, state and society has inflicted through class oppression. For the ruling elites, it was the usual response of condemnations and vows to eradicate terrorism from its roots. The masses are sickened by these pledges and denunciations of the civilian and the military elites. The tragedy soon passes into oblivion and the nauseating routine of hurling corruption allegations, scandals and bickering’s of the warring factions of the ruling class dominate the media and social psyche in this period of a relative lull and inertia. The surge of terrorist acts is not due to change in the military’s high command as depicted by the media commentators and analysts.

The injection of poisonous sectarianism and narrow religious fundamentalism by Gen Zia at the behest of US imperialists to destroy the Afghanistan’s 1978 Saur Revolution has now come to haunt the imperialists and the Pakistani state. The rhythm and beat of the music they composed is reverberating. These reactionary ethics and psychology embedded in the upper and the middle rungs of the state’s institutions cannot take any decisive action against these reactionary terrorist outfits whose consolidation has been brought about by the massive black capital. Such massive intrusion of dirty money in the structures of the state gives a material justification to this mindset and thinking. Nobody can predict when the so-called moderate clergy morphs into its extremist or terrorist version.

After almost 40 years the education syllabi to the social ethics of the country are in the shackles of a conservative thought and reactionary social institutions. It’s these prejudices and sectarian hatreds that provoke acts of terror and hence need a much radical and revolutionary purging and surgery. The hollow condemnations and vows reveal the impotence and apathy of the ruling elites to overcome these violent attacks and the influence and penetration of these mafias of the black economy, threatening their own economy and structures of their rulership.

Serious sections of the state do want to eradicate this menace but hidden hands always succeed in executing operations with selective targets and elimination. In the name of the national ideology of political Islam, the black mafia bosses heavily invest in the political parties, institutions and echelons of state power. They have eroded the discipline and structures of the state and are now posing a threat to the civic and social existence of society. Like a dark spectre of evil, they have begun to haunt the successors of their mentors who created them to perpetuate acts against their adversaries and enhance their interests of greed and hegemony. The desire for a substantial policy change by stakeholders of state and political power is a pipedream as they are compelled to continue these policies for the benefit of the vested interests of the reactionary, corrupt and crime infested ruling classes that these political and state actors are destined to serve.

Proxy wars are the new strategy in a period where the national and world wars are unaffordable, unsustainable and could end up in the mutual destruction of the adversary elites. From the Middle East to South Asia and Africa terrorism is brutally ravaging societies. Imperialist military interventions and economic plunder have perpetrated this process. Religious terror represents the rival capital’s interests. In the last analysis, these Frankenstein monsters are the products of the manoeuvres of the states that substituted them for operations they conducted covertly in another period of history and economic condition where the balance of forces of imperialism and nation states had a dissimilar equilibrium. Now they have to face the retribution of history. But these policies of proxy conflicts and the exacerbating infightings of the varied capitalist interests are tearing apart the social fabric of the country. The collapse of the left and betrayals of traditional parties and leaders have further added to this apathy and the mobilisation of the masses to fight these forces of dark reaction. With no real revolutionary alternative in the political spectrum, the petit bourgeois youth and the mass unemployed with prospects of bleak future can move towards such outfits in sheer frustration and in pursuit of their minimal survival.

The neoliberal economic model that replaced the Keynesianism is rapidly intensifying inequality and social turbulence. The crisis of the capitalist system is so acute that its historical obsoleteness and economic bankruptcy has not only debilitated the state structures but the surge of Islamic fundamentalist terror is a manifestation of this crisis. Terrorism can neither be eliminated through peace deals and agreements with such inhuman creatures nor can it be crushed by the states that had created and bred them.

With the penetration of these terrorists in the thickly populated cities and suburban towns, it’s a herculean task to find the surgically remove them out of the population in general. Although these religious bigots have a meagre support base, they have organised structure and abundant capital. They can launch small demonstrations to pressurise the corrupt rulers. Their seminaries in the hearts of Islamabad, Lahore, Karachi and other cities and towns across the country openly defy the state and political authorities. While the interior minister and state officials hobble with these reactionaries and provide justifications for their outrageous remarks and acts of intimidation against the ordinary citizens, they defy the laws by bribing and threatening the judiciary. But more than that they exploit the religious and sectarian sentiments of the state and political officials. However, their most potent weapon of bribery in a state and political edifice corrupt to the core and go off scot-free.

Hence without transforming the socio-economic reasons for the surge in bigotry and reaction mainly in these periods of inertia, the scourge of terrorism cannot be eliminated. The social, economic, political and administrative system that is obsolete and in terminal decay had to be transformed not only for the eradication of terrorism and reactionary ethical and cultural impositions on society but the task of developing society and put to an end to misery, poverty and want nothing less that a revolution is necessary for its accomplishment.