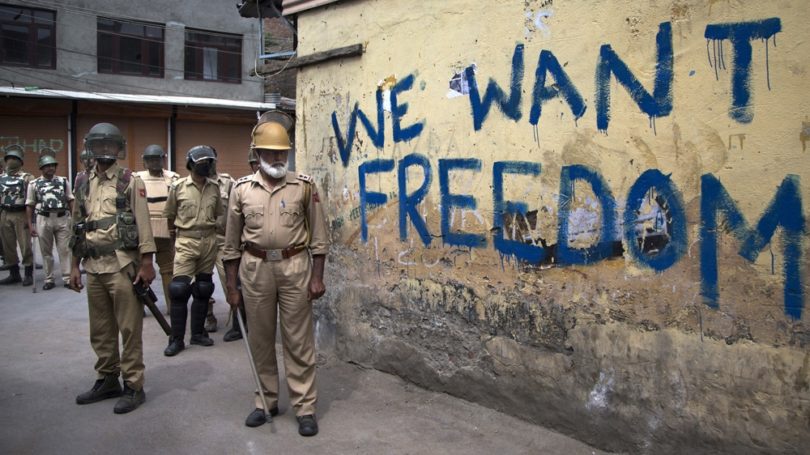 Once again the question of Kashmir becomes adornment on the world media as India abolished article 370 and 35A from its constitution that revokes the special status of Kashmir under Indian rule. The article defends state subject rule under which no foreigner can occupy or buy land in Kashmir. With this rule, Kashmir was the only state with such unique status under the Indian constitution. The BJP Home Minister Amit Shah declared Monday morning that Article 370 of the Indian Constitution is dead. Article 35A also goes.

This announcement is shocking once again in the sense of valley. The abrogation of State Subject Rule will worsen the situation in the valley. The fascist regime in power has tried to neutralize the valley’s aggression with power and used forces and direct bullets but it failed to conquer the valley. And this step may cause more bloody proxy war.

The Pakistani media and the ruling class is shedding crocodile tears. Media’s announcement, talk shows, ruling elites statements are nothing more than the routine crap. These are just adding salt over the injuries of Kashmiri masses. They are pushing own agenda behind the curtain.

We believe neither India nor Pakistan has any right to abrogate State Subject Rule. Kashmir issue can only be resolved under the nation’s self-determination, only the Kashmiri people have the right to decide where to move. The episodal drama continues with its ups and downs and will continue until the main stakeholders, the Kashmiri people and working-class interrupts. From Shimla agreement to Pakistan’s Karachi agreement, all these so-called rules and agreements were made by imperialists powers without considering the ambitions of Kashmiri people.

On one side India has imposed AFSPA in Kashmir and allowed its armed forces to roam freely and spread violence, even firing the pellet gun bullets upon the innocent Kashmiris. And on the other hand, Pakistan divided its parts by allowing so-called Azad-State in Jammu Kashmir while occupying Gilgit Baltistan (GB) by appointing the political agent as ruler of GB. Pakistan adopted this vulgar policy and by imposing act 74, the whole JK assembly was handed over to the Lent Officers while in GB they leased the land to China and abrogate State Subject Rule. There are gossips that Pakistan is also preparing to merge GB as its territory. The measures had already been taken in the CPEC agreements.

India and Pakistan are no more than the occupying imperialist forces in all terms. But the real questions remain unanswered. What the people of JK and GB want? Are they willing to join India or they favour Pakistan? Or they want a separate and free territory? These are the actual questions, that need to be answered. There are rumours that international imperialist powers-America and China may act as arbitrator in Kashmir issue. Some are hoping it to be a permanent solution for Kashmir issue. But we believe that imperialists have their hidden agendas. Their arbitrary favours their imperialist interests. The entry of international imperialists in the Kashmir issue will create more complexity as they never resolve any issue rather their main aim is to strengthen their hegemony and grab resources.

We reject the abrogation of State Subject Rule. We reject the Karachi agreement. We were never in favour of Shimla agreement that allows both countries to manipulate the seize fire over the Line of Control. We believe that it was the major step taken by both imperialist countries to rule Kashmir with for their interests. We never accepted the rule of Lent Officers.

We demand free and fair self-determination for unionized JK and GB territory. We are filing our case in front of workers and exploited masses of India and Pakistan and to the entire world’s proletariat. For Kashmiris, these are troubled times and both imperialists powers are being governed by their imperialist bosses-America and China. We will fight for our rights and believe that the ordinary workers particularly of India and Pakistan and the international working class will join our hand and struggle against this inhuman capitalist system and a socialist victory be ensured.