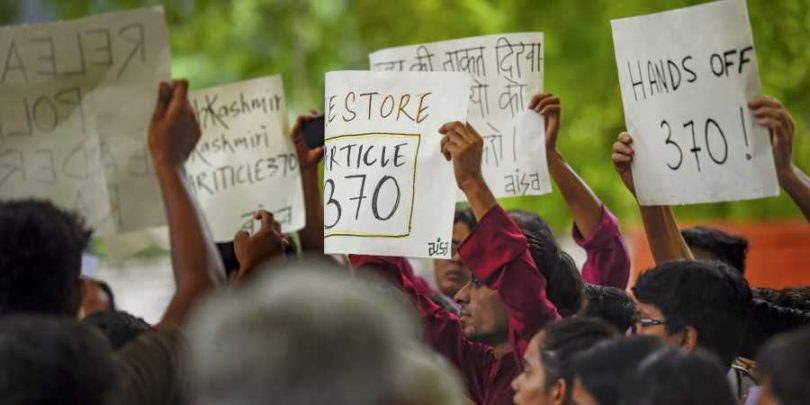 Radical Socialist stand on the Scrapping of Articles 370 and 35A

Radical Socialist resolutely and unequivocally oppose and condemn the effective abrogation of the fundamental meaning and purpose of Article 370 and the overturning of Article 35A. This was carried out through anti-democratic, unconstitutional legal manoeuvrings and accompanied by the deliberate armed intimidation of the people of Kashmir. What has taken place is dishonest and fraud on both the letter and spirit of the relevant Constitutional provisions.

Abrogation of Article 370 could only have been done with the assent of a reconstituted J&K Constituent Assembly which was dissolved in 1957. So first a Presidential Order impermissibly (without a Constitutional amendment) changes Article 367 so as to shamefully equate the J&K state assembly which has representative authority to the Constituent Assembly which has a superior sovereign authority. Since there is President’s Rule in J&K, on the recommendation of the Governor, the President then acts to scrap Articles 370 and 35A. Furthermore, for the first time in the history of independent India, a Reorganisation Bill was presented and passed in the two houses of Parliament to downgrade a region having the status of a state into two bifurcated Union Territories of J&K, which like New Delhi and Puducherry will be allowed to have a legislature, while Ladakh will join the five other Union Territories that have no legislature. This Reorganisation Bill at least would not have gone through if it was not for the pusillanimity of the opposition parties which went along with the BJP.

The Congress (most responsible historically for systematically eroding J&K autonomy) formally opposed these actions by the current government but with some of its leaders (e.g., Abishek Singhvi and Jyotirmoy Scindia) and members voicing objection to the manner in which this was done but not to the outcome. Only the mainstream left parties immediately organised street protests and called for an all-India day of protest.

Let us be very clear, the main motivation for this sanctioning of a brazen political and military occupation by the BJP government and Sangh is a) first, hatred of Muslims and the fact that this was the only Muslim majority state in the country. b) Second, it expresses the determination to humiliate the Valley population hence the prior sending of 35,000 more troops beyond the more than 650,000 armed personnel already there, along with house arrests of leaders of the mainstream Kashmiri parties, curfew orders and a complete communications lockdown on the whole of the Valley population. c) Third, it is to further advance the project of establishing a Hindu Rashtra. d) Fourth, it is a way of sending a geopolitical message to Pakistan, the US and the rest of the world that there is no longer any ‘regional dispute’ that must be settled bilaterally with Pakistan, let alone that it should feature in any way on the UN or international agenda, humanitarian considerations be damned!

What Now to Expect in the Shorter and Longer Run

We warn that the erosion of federalism and state powers more generally, is very much part of the Hindutva project and carries a danger even for those regional forces who think they can grow and expand through their despicable alliances and tacit agreements with the BJP at the Centre.

We call on all progressive-minded people who recognise the Hindutva project for what it is and oppose it, to stand in solidarity with the people of Kashmir. Justice and respect for Kashmiris demands the immediate de-militarisation of the Valley and the complete freedom for them to move around, to voice their legitimate anger at how they have been treated and to democratically protest in whatever way they see fit.

We strongly oppose the kind of exclusivist, culturally racist and militaristic nationalism that is being generated and of course reaffirm the right to full political self-determination by the oppressed people of Kashmir.

Radical Socialist is an internationalist Marxist organisation based in India.