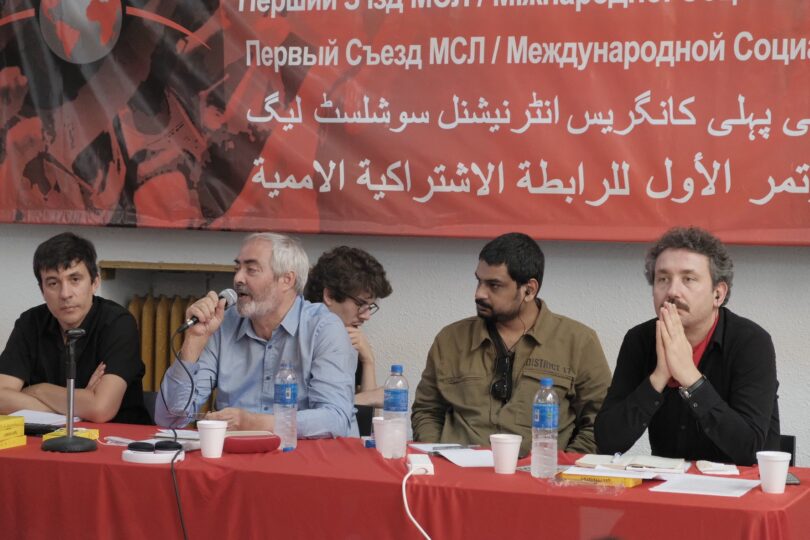 We have taken our first steps as an organization amidst historical events caused by the decadence of the capitalist-imperialist system: an economic crisis greater than that of 1930, a pandemic that has exacerbated it and caused the death of hundreds of thousands of people, unprecedented environmental destruction and powerful social struggles against all these scourges.

The need for a revolutionary leadership with worldwide mass influence has perhaps never become as pressing as in these times in which we live, in order to confront the barbarism that threatens humanity and lead the workers and other exploited and oppressed people towards the triumph of the socialist revolution.

We hold the first World Congress of the ISL shortly after the 80th anniversary of Leon Trotsky’s assassination. His death was a devastating blow to the young forces of the newly founded Fourth International. The leadership that remained at its head, despite having inherited solid foundations, quickly lost its way and fell into an unchecked revisionism that, after a few years, ended up causing the split and division of the International into different tendencies and currents.

Since the postwar period there have been various attempts to rebuild the Fourth International, but they have failed. The dispersion was accentuated. Some groups fell into national-trotskyism. And others took refuge in a model of international organization in which a party with a certain accumulation of cadres founded a current and brought together smaller groups in other countries under its leadership. The intrinsic weakness of these models led to political and methodological mistakes of different kinds, to partial elaborations, to dogmatism, to sectarian or opportunist deviations; and the growth of bureaucratic methods. Past crises and splits as well as the ones we have witnessed in different organizations in recent times are related to all this.

Unfortunately, no international current referenced in Trotskyism was able to pass the test to which they were subjected in the new stage that began with the fall of the Soviet Union and the turbulent years that have followed it up to the present. Nor has any single one become a dynamic pole of attraction for the vanguard.

Those of us who make up the International Socialist League humbly intend to begin to reverse this dynamic. That is why we defend a model for building international organizations that is completely different from the existing ones.

We regroup on the basis of a common understanding of the world situation and solid principles, detailed in the Programmatic Bases approved at our founding Conference. We vindicate Marxist theory, the teachings of Leninism and the works of Leon Trotsky.

As we come from different traditions and very dissimilar regions of the world, disagreements and differences will arise around certain debates. This, far from being a problem, will enrich our elaboration. We consider the fact that organizations that have marched separately for a long time are now able to coexist in the same international organization as a triumph and a necessity towards the goal of reversing the crisis of leadership that burdens the working class, and we intend to work to bring together the majority of the revolutionary forces under the same banners. We wager that common activity over time will allow us to build a new tradition and the necessary confidence to achieve a new, improved and revolutionary theoretical, political and methodological synthesis.

We do not conceive the construction of an international based on single thought or bureaucratic centralism. We defend the method of Democratic Centralism, because, together with a structure of professional militants and hierarchical organisms, it is essential for building revolutionary parties and fighting against the bureaucracy and the reformists for the leadership of the workers and poor people. But we are convinced that it is always necessary to prioritize the democratic pole over centralism and that this, which is fundamental for the task of building national parties and allowing collective elaboration, is even more important at the international level, where political elaboration has to be carried out respecting different national realities, traditions and leaderships.

These statutes serve to strengthen the ISL as an alternative leadership for the working class and to be able to successfully face the challenges and opportunities presented by the new world stage. We organize to fight in better conditions for a world without exploitation or oppression of any kind, in which existing resources are placed at the service of the equal enjoyment by all human beings: a socialist society.

The ISL is composed of affiliated national organizations. Only in those countries where there are no official sections will the affiliation of individual militants be accepted.

ISL sections will be guided by the constitutive bases of the Founding Conference, the documents approved by the Congresses, the declarations on the main events of the class struggle, and will carry out the international campaigns.

Each section of the ISL will contribute dues to guarantee the functioning of international organisms.

The structure and internal regime of the national sections of the ISL are based on the principles and practice of democratic centralism, which means the broadest internal democracy as well as the strictest discipline in action: the subordination of the minority to the majority, of the lower organisms to the higher ones, and of each party member to the party, as well as free discussion among all members on the most important issues; the party’s control over its leadership organisms and the election of the leaderships and responsible organisms, from the bottom up.

In the international´s organic bodies all the necessary debates to clarify agreements, and also differences if they exist, will take place, seeking to find superior syntheses. When this is not possible, agreements will be prioritized over differences in the resolutions. International campaigns will be carried out by all sections.

There can only be a single organization in each country recognized as a national section affiliated with the ISL. The recognition of new national sections in countries where one does not exist will be a responsibility of the International Executive Committee and will be submitted for subsequent ratification by the World Congress.

With exceptional character and by common agreement in the International Executive Committee and by the corresponding national section, those organizations that coincide with the program and are willing to carry out the resolutions of the international will be recognized as sympathizing sections, with rights and obligations, with consultative vote at the World Congress and other organic bodies.

The IEC can invite to its meetings organizations that do not belong to the ISL but with which there are possibilities of integration, and may propose the same for the Congress, which may, in turn, decide that said organizations have the status of permanent observers. In all cases, the agreement of the official ISL organization of the same country as the organization being proposed as invited guest or observer, is required.

The maximum organ of the ISL is the World Congress, where the policy of the International Organization is determined, resolutions are passed, and organizational issues and internal conflicts are ultimately resolved. The World Congress is composed of delegates from all sections, elected by National Conferences and Congresses, in the proportions established by the International Executive Committee.

The World Congress meets ordinarily every 2 or 3 years and extraordinarily when summoned by the International Executive Committee or by a third of its national sections, a request that must be addressed by the IEC, which will proceed to convene it. The period prior to the ordinary World Congress must cover a minimum of six months; during this previous period, differences of opinion, objections to opinions, decisions and perspectives are allowed at all levels. Such differences may be expressed in verbal or written form, and be subjected to a vote. National parties and sections should tend to observe this norm for their national congresses.

The World Congress elects an International Executive Committee (IEC) representing the main organizations and traditions that compose the International Socialist League. The IEC is the supreme organ of the international organization during the period between Congresses. It is in charge of defining the main orientations of the ISL and of applying its resolutions. When the IEC convenes the World Congress, it must ensure that the sum of the delegates representing the two strongest parties does not exceed one third of the total composition of the Congress.

The number of members of the IEC will be decided by the World Congress. Unrepresented sections may be invited to IEC meetings with a consultative vote. The IEC meets ordinarily every six months and extraordinarily when convened by the Secretariat or by a third of the members of the IEC. A national section can propose the revocation or replacement of one of its members who belongs to the IEC; such a measure must be approved by the majority of the IEC.

The IEC elects an International Secretariat (IS) from its members, which constitutes the day-to-day leadership team of the organization between IEC meetings. It is in charge of publishing the press, media and social networks, the informative circular and the organization’s discussion bulletin. The IS ensures the link between sections, the promotion of international political discussion and the campaigns and takes the necessary measures to that end.

Transitory clause: until the conditions necessary to guarantee the installation of all members of the secretariat in the same country are met, regular operation will be guaranteed through digital means and specific trips.

In order to guarantee better ties and greater political and organizational cohesion between countries in continents far from the headquarters of the International Secretariat, the IEC can resolve the formation of under-secretariats, of which the IS will be in charge.

Public rupture with the ISL’s program, conscious violation of the statutes, actions incompatible with proletarian and revolutionary moral or that endanger the organization and its members, will be subject to sanctions by international organisms. The sanctions will range from internal reprimand and temporary separation, to definitive expulsion. Sanctions are of immediate application and appealable before competent immediately superior instances, until the World Congress.

The World Congress will elect a 3-member International Moral Commission, each from a different section and that have a long reputation of objectivity and militant tradition. This commission, elected unanimously, has the function of examining cases related to actions incompatible with proletarian and revolutionary moral and making a conscientious decision. This commission answers only to the World Congress.

Transitory clause: if there are no conditions for electing this commission, the IEC will assume its functions until it is approved by a World Congress.