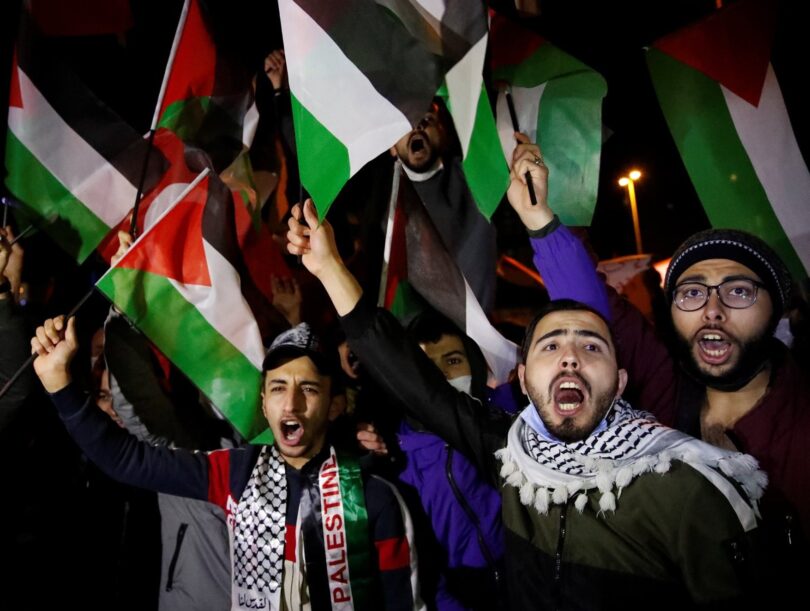 The Palestinian blood is once again being spilled by the Zionist terrorist state of Israel. More than 100 innocent Palestinians, including 20 children, have been killed and hundreds wounded so far by Israeli bombardment in the Gaza Strip. Under the pretence of targeting Hamas militants, two residential apartments have been razed to the ground by Israeli jet fighters which may further increase the death toll. Israeli Prime Minister Benjamin Netanyahu has said “it will take time” to complete the mission and Hamas and Islamic Jihad “have paid, and will pay a heavy price.” Apparently the recent crisis was ignited when on 2nd May, six Palestinian families in Sheikh Jarrah of East Jerusalem were served with eviction orders by Israeli authorities. 28 more families were awaiting eviction orders from the Israeli courts on 9th May. In solidarity with the affected families, protests were held in Sheikh Jarrah and other Arab majority neighbourhoods. Palestinian protesters clashed with the police and Jewish settlers. Israeli police raided Al-Aqsa Mosque with tear gas shells and stun grenades. In response to mosque raids, Hamas in the Gaza Strip started firing rockets on the nearby Israeli towns. Israel retaliated by indiscriminately bombing innocent Palestinians in the Gaza Strip. In view of the crisis-ridden government of Benjamin Netanyahu, the Israeli Prime Minister might probably be availing the time-tested recipe of Prussian general and military theorist Clausewitz that war is the continuation of politics by different means.

Scenes of Israel’s brutal bombardment and destruction of Gaza, which collapsed at least two residential buildings.
At least 35 people have been killed by Israeli airstrikes on Gaza, including 12 children, and many have been left without homes. pic.twitter.com/eJdXNxa2xn

The Palestinian families in Sheikh Jarrah are living here since 1956 when the Jordanian government (at the time the West Bank and East Jerusalem were controlled by Jordan) in cooperation with the United Nation’s organization for refugees housed these Palestinian refugees here with tenancy rights. However, after the third Arab-Israel war of 1967, the area came under Israeli occupation. In 1972, these properties were registered under the Jewish trusts which demanded rents from the Palestinian tenants. Afterwards, the Jewish trusts sold the properties to a right-wing Jewish settler organization which made repeated attempts to evict the residents. Under Israeli property laws, the Israelis can reclaim properties in East Jerusalem that were owned by Jews before 1948. However, no such law exists which would enable Palestinians to reclaim their properties inside Israel which they lost during Nakba in 1948. The Jewish settler organization claims that the properties of Sheikh Jarrah were bought by a Jewish trust from Arab landowners in the 1870s. On the other hand, Palestinian cartographer Khalil Tufakji travelled to Ankara in 2010 and found an Ottoman-era document that negated any Jewish ownership of the said property, but the Israeli court rejected the document. Considering the recent events, the Israeli court has withheld the decision for one month.

Prior to the advent of the Zionist movement at the end of 19th century, the Jews were 3 per cent of the population of historical Palestine who had no aspirations for a separate Jewish state. However, the European imperialists promoted the idea of a separate Jewish state and founded the Zionist movement. Religious scripts from the Hebrew Bible and interpretations were rolled out to justify the establishment of a Jewish state in the territory of historical Palestine. Subsequently, the process of emigration of Jews from all over the world to Palestine was started to bring a demographic change in order to “create facts on the ground” for the future establishment of a Jewish state.

After the disintegration of the Ottoman Empire during the First World War, the Palestinian territory came under British mandate. The British colonialists through their Balfour Declaration of 1917 formally laid the foundation of a future Zionist state in Palestine. By purchasing lands from “Absentee Landlords” the construction of Jewish settlements was accelerated. The ever increasing anti-Semitism in Europe and the persecution of Jews by Hitler’s fascist government and others further speeded up the emigration of Jews to Palestine. So much so that before the announcement of the UN partition plan of Palestine, the Jewish population made up 27 per cent of historical Palestine.

Under the UN partition plan of Palestine, 55 per cent of the Palestinian land was allotted to the Jews including many Arab majority towns, agricultural lands, important coastal cities of Haifa and Jaffa. Palestinians rejected this plan and the first Arab-Israeli war broke out. On the one hand, the Zionist paramilitary forces, armed to their teeth with full imperialist backing, continued massacring innocent Palestinians, annihilating whole villages, evicting and uprooting the residents; on the other hand, the neighbouring Arab monarchies were more interested in grabbing the remaining Palestinian land than in Palestinian liberation. At the end of 1949, the Zionist state had occupied 78 per cent of historical Palestine. West Bank and Gaza Strip were grabbed by Jordan and Egypt respectively. In the third Arab-Israel war of 1967, Israel captured West Bank, Gaza and Golan heights too, culminating in another process of Jewish settlements which is continuing to date.

In the last five decades of occupation of West Bank and East Jerusalem, the Zionist state has been constructing Jewish settlements inside Palestinian territory. These Jewish settlers are mostly lumpen elements and Jewish extremists who are heavily armed. They regularly damage Palestinian properties and set fire on their olive orchards. They routinely harass and torture neighbouring Palestinians with Israeli police looking on. According to some estimates, there are around 800,000 Jewish settlers in West Bank and East Jerusalem residing in 160 legal and 120 illegal settlements. All these settlements have been constructed on lands grabbed from Palestinians through forced evictions. One of the purposes of these settlements is to bring about such a demographic change that could obstruct the way for a future “Palestinian state”, although the two-state formula of Palestinian issue has always been doomed to failure. The establishment of an independent Palestinian state bordering a powerful Zionist state is a utopia.

These Israeli atrocities also laid bare the disgusting role of the world (imperialist) community and their prostitute media. A few days ago, during a press briefing of the American state department, the hypocrisy of American imperialism was clearly exposed by some questions of the journalists present there. The State Department spokesman was talking about the damages caused by rockets fired by Hamas but when he was asked about the deaths caused by indiscriminate Israeli bombing on Gaza, he declined to comment “because the reports were yet to be verified”. The corporate media hypocritically portrays the Israeli invasion of Gaza as “hostilities” between Palestinians and Israelis despite the fact that the meagre homemade rockets of Hamas are no match to the powerful Israeli military.

These Israeli atrocities are coinciding with the worst crisis in Netanyahu’s government in recent years. He is facing charges of corruption, bribery and breach of trust. Of late, there have been large protest demonstrations against him. So deep is the political crisis that there have been four general elections held in the past two years; despite this, his Likud Party failed to gain enough seats to form government easily. In March this year, his party obtained 30 seats in the general election, far behind 61 enough to form a government. He failed the deadline of 4th May set by the president to form a government. The atrocities in Gaza might be a fig-leaf to diffuse the crisis at home in order to gain the support of far-right Jewish fundamentalists in forming a coalition or (in case of a new election) attract the far-right Jewish votes.

Decades ago Leon Trotsky had said, “The attempt to solve the Jewish question through the migration of Jews to Palestine can now be seen for what it is, a tragic mockery of the Jewish people…. Never was it so clear as it is today that the salvation of the Jewish people is bound up inseparably with the overthrow of the capitalist system.” The events of the last seven decades stand proof of the destabilizing results of creating a Zionist state in the Middle East. Even the working-class Jews in Israel has been suffering under the constant fear of conflicts and wars. Every Israeli citizen has to go through two years of conscription. However, despite all anti-Arab and anti-Muslim propaganda of the Zionist state, there is a growing brotherhood and class solidarity among the working class Arabs and Jews which manifests itself in all movements and anti-government protests. The biggest example is the movement around Arab Spring of 2011 when the working classes of Israel rejected all Zionist propaganda and stood in solidarity with the revolutionary movements of their Arab brethren. No force on earth can erase this class solidarity. The corrupt Arab monarchies, who have been shedding crocodile tears over the plight of Palestinians, are establishing ties with the Zionist state. This is their kind of class solidarity. In the same way, the Jew and Arab working classes have a common fight against the Zionist state of Israel. Palestinians can’t fight the Zionist state alone. In this fight, the working classes of Israel are their natural allies, who are also oppressed by the same state. The working classes of Israel, the West Bank and Gaza must unite to overthrow the Zionist capitalist state and establish a voluntary socialist federation of Jews and Arabs which is their only salvation.