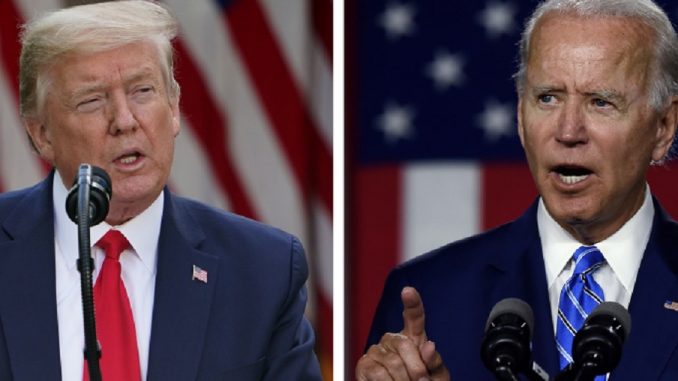 There is little more than a month left before the presidential elections on November 3. The campaign is taking place in a political scenario marked by crisis and polarization, against the backdrop of more than 200,000 deaths from the pandemic, a historic rebellion against racism and police violence, and the most important economic crisis since the 1930s. The first debate between the presidential candidates showed the decadence of the political regime, Trump’s law and order strategy of polarization, and clearly demonstrated that, faced with this pressure, Biden quickly moves to the right.

The highly polarized political scenario in which the presidential election is taking place has deep structural roots. To understand it properly, it is necessary to go back to the 2008 crisis and its consequences. The decade that followed was marked by an economic “recovery” in which levels of inequality and job insecurity increased. For example, according to data from the US Department of Labor, 3/4 of the jobs created between the crisis and 2018 were low-wage jobs.

Along with this, and fueled by this process, political radicalization and a rise in the class struggle developed. This had several important milestones: Occupy Wall Street, the first iteration of Black Lives Matters in 2014, the massive ”red state” strikes of education workers in 2018, the ascent of the feminist movement that carried out a historic mobilization the day after the Trump’s presidential inauguration, among others.

The economic crisis and the rise in struggles combined and contributed to a crisis of legitimacy of the bipartisan political regime. Both parties of capital were shaken by this process. In the case of the Democratic Party, the enormous expectations placed on Obama ended in a major disappointment at the unfulfilled promises of change. In 2016, the insurgent candidacy of Bernie Sanders managed to capture some of this frustration and radicalization, and shook the establishment aligned behind Hillary Clinton. In the Republican Party, the crisis first found an expression in the emergence of the Tea Party and then in the rise of an “outsider” like Trump. With a right-wing populist, xenophobic discourse, he managed to win the nomination and then the presidency.

The polarization and crisis continued during this period. An emboldened right tried to appear strongly on the scene, but after Charlottesville in mid-2017 it retreated. The pandemic has accelerated all the components of this situation. The immense and historic rebellion against racism and police violence has been the most important ongoing development of the recent months. In response to this, Trump has deployed a strong political offensive, relying on the police departments, some federal agencies, and a “law and order” discourse that has become his main campaign strategy. This has mobilized far-right groups against protests, such as the militias of which Kyle Rittenhouse, who killed two protesters in Kenosha, was a member.

As a symptom of this crisis, after the first presidential debate the mainstream media agreed on the difficulty of finding a winner, and emphasized the low level of debate. Biden holds a solid lead in polls nationally and in several key states for the Electoral College votes. However, this seems to be getting narrower as the elections approach. The memory of 2016, when the vast majority of the polls and analysts considered that Hillary Clinton would win, has left a profound mark and the forecasts are now more modest. To this we must add the extreme volatility of the political situation.

Faced with the prospect of a likely Biden victory Trump has launched a campaign to challenge the legitimacy of the electoral process. He has aimed fundamentally against mail in ballots and when asked by reporters, he has refused to confirm that he will recognize the electoral result. However, key spokespersons for the Republican Party have been quick to say that the transition will be respected. Added to this are the maneuvers of voter suppression and discarded ballots. A scenario in which the electoral result is questioned, even legally, is within possibility. This may be one reason for the rush to secure the Supreme Court nomination.

The Left and the Lesser Evil

An important part of the left and the progressive sectors take some of these elements into a unilateral analysis of the political situation, which leads them to capitulate to the Democratic Party. They start from seeing Trump in a position of strength, on the offensive, and argue that he is preparing to carry out a coup. They characterize Trump as a fascist, and say it is necessary to vote for Biden to stop him.

This argument starts from a mistaken evaluation of the balance of class forces and also of the political orientation of the ruling class itself. While there are far-right groups, and they should never be underestimated, what sets the dynamics is the immense anti-racist rebellion. The mobilization of the right has been precisely in response to this, and in incomparably smaller numbers. On the other hand, the US ruling class has shown its support for Biden, and rejection of Trump. The Democratic candidate has been receiving more economic contributions to his campaign, and in the last month important figures of the state apparatus have publicly expressed their support.

In this context, by calling for a vote for Biden an important part of the left contributes to postponing the urgent task of building an independent alternative. Furthermore, it will not achieve its stated goal of curbing the far right. A Biden victory will not resolve the structural conditions that allow these forces to develop. Biden’s neoliberal and imperialist agenda will deepen them. One clear take from the debate was Biden’s dynamic when confronted by Trump on key issues such as Medicaid, police reform and climate change. Biden responded to these challenges by positioning himself systematically to the right: he said he will not end the insurance business, that he opposes defunding the police, and that he is not in favor of the Green New Deal. This is a small glimpse of Biden’s dynamic when faced by the right. The way to stop the extreme right will be through mobilization, not in these elections, and for this task it is also essential to build an independent force.