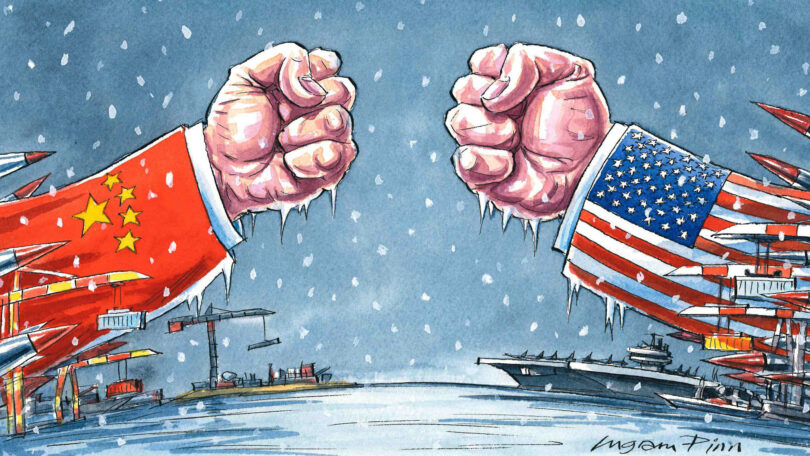 On 19th March, the US and Chinese diplomatic delegations, headed by senior officials on both sides, exchanged fiery words criticizing each other’s policies during the first meeting of US and Chinese officials since Joe Biden came to power. The American officials, as usual, put up issues regarding Hong Kong, Taiwan, Xinjiang and the “economic coercion” of its allies with China. They accused China of threatening the “rules-based” world order. In turn, China accused the US of using its “military force and financial hegemony to carry out long-arm jurisdiction and suppress other countries”. China termed the US a human rights hypocrite and slammed them for their mistreatment of black people. All these fiery exchanges were being broadcasted on media. Both sides seemed to be attempting a grandstanding in front of their domestic audiences. However, as per the account of an American official, as soon as the media left the room both sides got to the business in a calm atmosphere. Such exchanges have become a norm in the recent past due to the complex relationships between the US and China. The fact that both sides got to the usual business after the fiery exchanges in front of the camera signifies the enmeshed nature of their economic relationship which has put them in a precarious situation where neither they can go for an open conflict nor keep silent over each other’s “excesses”.

In recent years, with its ever-increasing economic clout and as a major global economic power, China has been increasingly asserting itself on the world stage. In one field after another, it is on a collision course with the US. Relations were already strained during Barak Obama’s presidency but with Trump at the White House, the relations further nosedived at an all-time low with both sides imposing tariffs on each others’ commodities resulting in a trade war which is a bad omen for an already crisis-ridden world economy. Similarly, as part of an extensive diplomatic conflict, the US-allied western media-houses are particularly focusing and manipulating the news regarding the situations in Hong Kong and Xinjiang.

In 1978, when the US and China formally established diplomatic ties, the Chinese economy was a meagre $149 billion while the US GDP was $2.3 trillion but with the subsequent opening-up of the economy it grew in size and today it stands at an awe-inspiring $15.42 trillion, second only to the US. This supposedly “miraculous” transformation was possible only through the sell-off of Chinese skilled cheap labour that was built during the three decades of a centralized planned economy in the Maoist era which provided a strong base for the subsequent capitalist “growth”. Meanwhile, China gradually dismantled the centralized planned economy (the soul of a socialist economy) to the extent that the current president Xi Jinping openly declares that China must not return to the old path of a planned economy.

With the rapid growth of its economy, China surpassed Japan and in 2010 it became the 2nd largest economy in the world. With the increasing economic power comes political, diplomatic and geostrategic assertiveness. Chinese capitalist growth comes at a time when global capitalism is engulfed by its terminal organic crisis. American imperialism’s former military belligerence has been dented by its economic decline. They are retreating from the Middle East and Afghanistan and America’s so-called global leadership is eclipsing. More regional powers are raising their heads everywhere.

In such a scenario, the Americans are striving to preserve their “world leadership” i.e. historical global dominance and the so-called “rules-based” liberal order. It is a multifaceted and complex rivalry that has the least similarity with the cold war that America fought with the former Soviet Union, given the enmeshment of both the economies. Recently, the most pronounced exhibition of this conflict can be seen in the raging trade war between the two. The US government has been accusing China of “unfair trade practices” and intellectual property theft. Donald Trump called China a “currency manipulator” and slammed them for their practice of “forced technology transfer”.

Over the years, China has been alluring foreign companies to access Chinese markets in return for technology transfer. Access to modern technology has been key to China’s recent economic development. It has helped them to modernize their economy and increase productivity. However, the way they acquired modern technologies is anathema to the so-called “rules-based” liberal order, as the preservation of intellectual property right is the cornerstone of the system of private ownership of means of production and the overall system of private property. That’s why the capitalist system zealously guards this intellectual property right. In fact, all technologies are the result of human labour over thousands of years. Its conversion into private property is a ridiculous idea that is meant to increase the wealth and profits of a few individual capitalists or groups of capitalists. China’s practice of technology theft or forced technology transfer is the only way for capitalist China to access modern technology as the capitalist countries and companies jealously guard their technologies which is the source of all their wealth. They would never share their wealth with anyone.

The trade war initiated by former US President Donald Trump led to reciprocal actions by China, thus endangering the global supply chain and ultimately the whole world economy. The tariffs imposed on Chinese exports to the US were meant to revive American manufacturing, reshoring of factory production and reduction of astronomical trade deficit with China. They achieved none. As per the analysis of The Wall Street Journal, “President Trump’s trade war against China didn’t achieve the central objective of reversing a U.S. decline in manufacturing, economic data show, despite tariffs on hundreds of billions of dollars of Chinese goods to discourage imports”.

“The tariffs did succeed in reducing the trade deficit with China in 2019, but the overall U.S. trade imbalance was bigger than ever that year and has continued climbing, soaring to a record $84 billion in August as U.S. importers shifted to cheaper sources of goods from Vietnam, Mexico and other countries. The trade deficit with China also has risen amid the pandemic, and is back to where it was at the start of the Trump administration.” (25th October 2020)

In fact, these were the measures that actually threatened the global “liberal” order and caused the world economy to slow down. The tit-for-tat measures damaged both the US and Chinese economies. According to Brookings Institute, the USA had already lost 300,000 jobs and 0.3 per cent of its GDP in 2019. Ultimately, the US and China signed a truce in January 2020 in which China agreed to purchase $200 billion of American goods over the next years, protect intellectual property and halt forced technology transfers.

If America could not achieve a single objective of its trade war with China then the question arises as to why initiate such a war in the first place? The American objectives of reshoring of production and putting a halt to China’s forced technology transfers are impossible to achieve. The rivalry between the two is so complex and at the same time intense that they have no clue how to unknot these puzzles. Any brash measure by any side would open the floodgates of devastations on a world scale. Under the current socioeconomic system, there is no peaceful solution possible for these disputes. Till now, all of their measures tantamount to insanity and stupidity.

Their rivalries can also be observed in geopolitical re-alignment. Pakistan is part of China’s ambitious Belt and Road Initiative known as CPEC (China Pakistan Economic Corridor). Until recently the Pakistani media was rife with news and analysis of economic ‘benefits’ and ‘miracles’ of these projects. However, with the advent of Imran Khan’s government in 2018, the Pakistani economy further went into a deep crisis and had to turn to IMF (America). Pakistan was provided with bailout packages. The country had to realign itself with America which brought intense political realignment in internal politics. Nepal is another example of their rivalry where China is spreading its economic tentacles while India (an American ally) is also fighting for influence. A few days ago China and Iran signed a 25-year cooperation agreement that will boost bilateral trade, military engagement and investment in the Iranian economy. China vehemently supports the military coup regime in Myanmar where the government of proponent of “rules-based” liberal order Aung San Suchi was overthrown recently by the country’s powerful military. Their proxy wars are a constant source of instability and crisis in these states.

Of late, tensions have also increased in the South China Sea between US and China. According to estimates $3.37 trillion of global trade passes through this strategic waterway annually. China lays claim on 90 per cent of resources of the said sea while Brunei, Malaysia, the Philippines, Taiwan and Vietnam also lay claims to part of it. China also claims ownership of different islands. It has built artificial islands and installed military equipment on them. USA rejects Chinese claims on resources of South China Sea. America has regularly sent warships in the sea to demonstrate freedom of navigation there. On occasions the American warships had come in close proximity of Chinese warships in the sea, endangering deadly confrontation.

Recently many bourgeois analysts termed the US-China rivalry a new Cold War. But this analogy has its limit. During the Cold War with the Soviet Union, US had succeeded in rallying the whole capitalist world against the “Evil Empire”. The Soviet Union had a diametrically opposed economic system to that of the whole capitalist world. There was hardly any economic contact between the Soviet Union and US. On the contrary, ever since the opening up of the Chinese economy in 1978, China has been transformed into a major capitalist economy whose leaders openly dismiss the planned economy, though the leaders of the “liberal order” dislike the Chinese capitalist model because it is not liberal enough that’s why they hide their savage greed for profits under the thin veneer of hypocritical terms of human rights violations, authoritarianism, dictatorship etc. Today the US and China have deep economic interpenetration. America provides a huge market for Chinese products. Thousands of American and Chinese companies have invested in each other’s economy. Their economies are entangled through thousands of threads. The Trump administration’s stupid idea of economic “decoupling” is a utopia. Not only the USA, but the Chinese economy is also enmeshed with the whole world and is part of the global supply chain. These can never be disentangled or “decoupled”. Any such move will disrupt the global supply chain and economic devastation will ensue far more calamitous than the combined effects of all depressions and recessions of capitalist history. Under the capitalist system of private ownership of means of production, this conflict will conflagrate with ebbs and flows but can never extinguish. Only the overthrow of system of private ownership of means of production (or “rules-based” liberal order) can wipe out these conflicts forever.