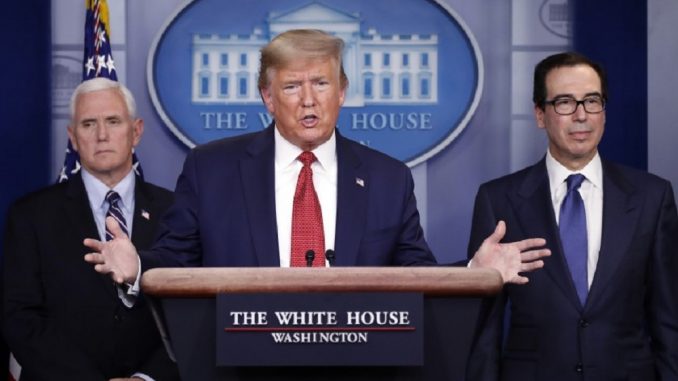 Early on Wednesday in the U.S. Senate a bipartisan agreement, with approval from the White House, was announced for a “relief” package for the coronavirus crisis amounting to $2 trillion. Rumors of the deal had already been greeted enthusiastically by the stock market on Tuesday. The New York Times described it as “the biggest relief package in modern American history” and the Washington Post said it will “flood the U.S. economy with dollars.” Meanwhile representatives talked about “war – level investment” and compared it to Marshall Plan. What is the scope of the deal? Who will benefit from it? Will it be enough to avoid an economic depression?

The package was announced after 5 days of negotiations between Democrats and Republicans in Congress, and at a time when the pandemic is growing in the US and the economic crisis is deepening. With more than 60,000 confirmed positive cases and more than 850 deaths, the country, and especially New York City, has become one of the world’s epicenters of Covid 19. On the side of the economy, the crisis has not only impacted the stock market which in recent weeks recorded losses equivalent to all the accumulated gains during the Trump administration. Unemployment is rising sharply. According to estimates some 3.4 million people applied for unemployment insurance from March 15 to March 21, which would bring the total number of unemployed from 5.7 to 9.1 million people. There are projections that unemployment will be above 25% during the first half of 2020.

The amount of money involved in the “relief package” exceeds both bailouts of the 2008 crisis combined: the 2008 Emergency Economic Stabilization Act of $700 billion, and the 2009 American Recovery and Reinvestment Act of $831 billion. This is an unprecedented rescue of large corporations, softened with some measures for the working class and the people that fail to mitigate the impact of the crisis.

One of the main points of the agreement is the creation of a $500 billion dollar fund for “liquidity assistance” of large corporations. After a substantial part of the 2008 and 2009 bailout money went into the pockets of executives and stock buybacks, these practices had to be restricted in the current legislation. This is, nevertheless, a monumental transfer of wealth to corporations.

The bill also includes $350 billion in loans for small businesses and $150 billion for governments at the local and state levels. There will be a special $50 billion dollar fund in non-refundable loans to businesses if they keep their payroll on and the state will pay up to 50% of wages. Companies will also have significant tax exemptions.

An additional $100 billion dollars will go to the health system in what a senator described as “a Marshall Plan for Health.” This does not change at all its profit-driven structure. As health workers have reported and as dozens of studies reveal, the profit driven health system is one of the main causes for the country’s lack of preparedness for the pandemic. Its business management goal of working at 90% occupancy to reduce operating costs has produced a dramatic 39% reduction in the number of hospital beds available since 1981.

The counterpart to this huge bailout of the system will be a single payment of $1200 to workers with annual incomes of less than $75,000, with an additional $500 per child. The so called “unemployment on steroids”, involves increases of up to 600 dollars per week to unemployment insurance, its extension to 4 months and the inclusion of self-employed and furlough workers to the benefits. Considering that even government officials admit they expect the “coronavirus crisis” to last for at least 18 months, it is clear that these measures fall extremely short of what is really needed.

Compared to the 2008 and 2009 bailouts, the current agreement has had to include some concessions to the working class, even if they are dwarfed by the size of the corporate bailout. This may be due, in part, to the fact that the financial crack and the impact on the real economy of the pandemic develop at the same time forcing the ruling class to give a response. But, also, the decade that has elapsed since the 2008 crisis has seen a growth in class struggle in the US. Even if modest on a historical scale, the resurgence of worker strikes such as those of teachers, social movements like Occupy Wall Street, Black Lives Matter and others, the radicalization of the youth and the growing popularity of socialist ideas generate new conditions under which the ruling class and its parties have to operate.

A Prospect of Depression and the Need for a Socialist Response

As we discussed in previous articles the pandemic triggered a crisis whose elements had already been prepared, and whose first symptoms were already unfolding in the economy of the United States and the world. It is against this backdrop that the effect of the “stimulus package” and the prospects for the unfolding of the current crisis must be analyzed.

One of the main risk factors in today’s crisis is the immense corporate debt. According to research, the debt of U.S. non-financial corporations has more than doubled from 2007 to 2019 going from $3.2 to $6.6 trillion dollars. According to economists Joseph Baines and Sandy Hager, this general trend of corporate indebtedness becomes particularly worrying in companies that make up the bottom 90% with regards profits. Many of these are the famous “zombie companies”. Their survival has been made possible by taking in high levels of debt at low interest rates. However, in the face of a change in the overall scenario, we could witness a wave of bankruptcies of these companies with shockwaves across the economy.

That’s why “flooding the US economy with money”, the Washington Post´s euphemism for filling corporate pockets with money, won’t stop the crisis. On the one hand, because it will increase the trend towards the growth of corporate debt. As Michael Roberts says in a recent interview: “The policy options being adopted by governments, central banks, and international agencies are the same as in the Great Recession. Huge injections of credit in trillions of dollars are being applied. But this is credit; in other words, it is more debt (at low rates of interest) put into banks for them to lend on to companies and institutions in trouble. Debt is being piled on debt to keep things going.” On other hand, because the global scale of events will continue to feed the crisis.

Capital and its governments provide no way out of the current crisis, with its connected economic, health and environmental dimensions, that can benefit the majority of society. The capitalist system will always put profits over people. Trump´s response to the pandemic, as well as this bipartisan bailout bill are a clear demonstration of this.

But, all over the world we see working-class response. Revolutionary socialists can play a key role in organizing the demands of the working class in their workplaces and in their neighborhoods. These fights for immediate demands must be articulated with a global struggle for a socialist reorganization of society. It is an indispensable task of the moment to build a revolutionary current in the United States capable of organizing this enormous challenge. The International Socialist League is committed to this task and to organizing the struggle for socialism in every country where it is present.