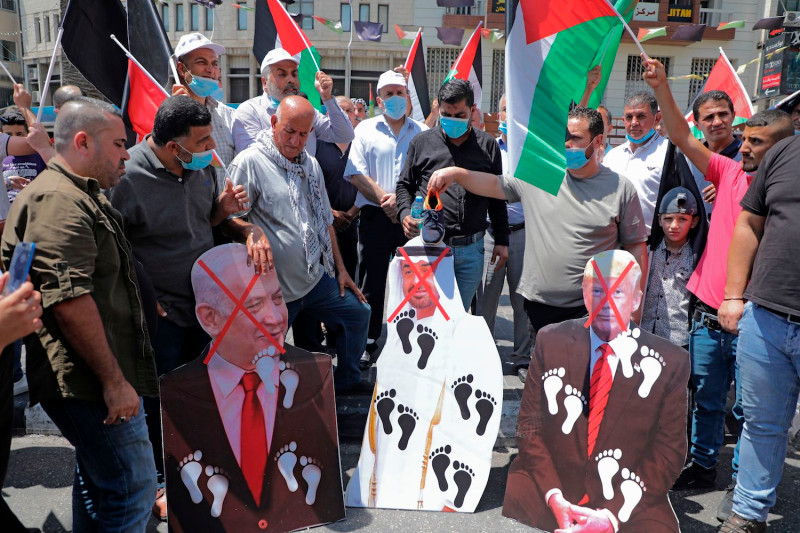 On Thursday 13th August, the United Arab Emirates and Israel reached an agreement that would lead to the establishment of diplomatic relations between the two countries. UAE will only be the third Arab country, after Egypt and Jordan, to have established formal diplomatic ties with Israel. It should come as no surprise to anybody as all Arab monarchies have been enjoying not-so-secret informal ties with Israel over the years. The fact that the UAE monarchs concluded a deal with Israelis over the heads of Palestinians is yet another manifestation of this grim reality that over the years the Arab monarchies have been using the Palestinian issue for their domestic political consumption. Donald Trump boasted, “This deal is a significant step towards building a more peaceful, secure and prosperous Middle East”. Of course, the business houses in both countries will reap the lavish harvest of formal ties afterwards but the braggadocio about “peace” and “prosperity” for the Middle East is utterly nonsensical. The misery, deprivation and banishment of Palestinians will aggravate, so would the crisis of these rotten Sheikhdoms as the renewed mass upsurge in Lebanon looms large over the Arab world. 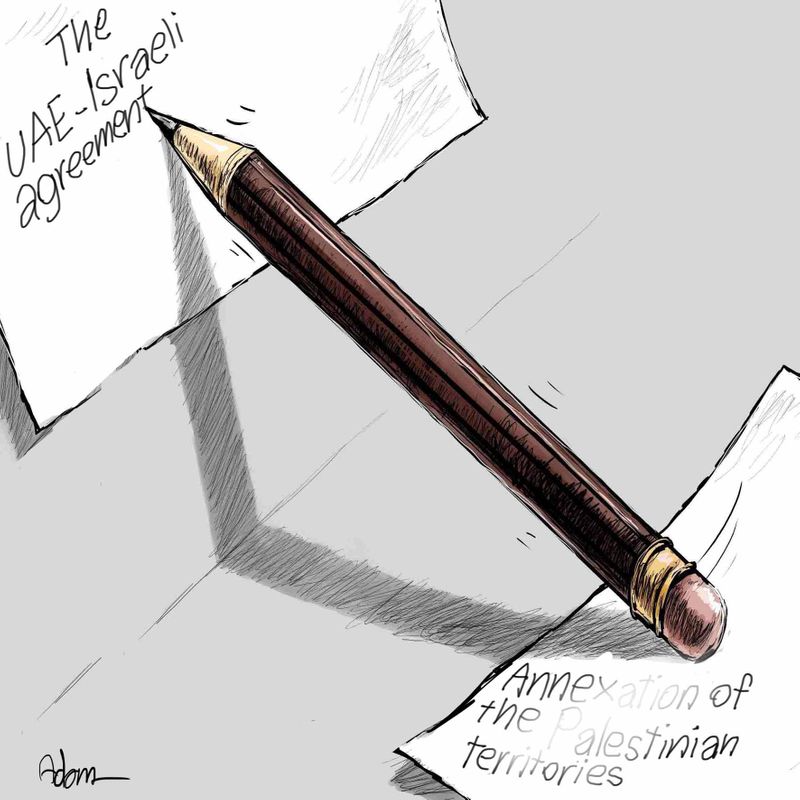 As per the agreement both countries would establish “full normalization of relations” and in return, Israel will “suspend” the proposed annexation of Jewish settlements in the West Bank.

The deal was mediated by Trump administration with President Donald Trump’s son-in-law, Jared Kushner playing the lead role. As per the agreement both countries would establish “full normalization of relations” and in return, Israel will “suspend” the proposed annexation of Jewish settlements in the West Bank. The unveiling of this “suspension” as some kind of “win” or “concession” for Palestinians by Emirati leaders is the hypocrisy of first order. This is an attempt by these Arab monarchs for absolution from their historic crimes perpetrated against Palestinians in connivance with Israeli Zionist state. In fact, the Arab monarchies have been shedding crocodile tears over the plight of Palestinian masses and at the same time conniving with the Zionist state.

Over the years Palestinians have been used as pawns by rulers of the Arab world. Liberation or creation of an independent Palestinian state has never been their concern. Palestinian refugees languishing in various Arab countries stand as testimony to the support and concern of these rulers for the cause of Palestinian masses. Various Arab rulers have turned their respective Palestinian refugees hostage to their policy contingencies. During the Gulf war when the President of Palestinian Authority Yasir Aarafat openly supported Saddam Hussein, Saudi Arabia and Kuwait expelled 500,000 Palestinian workers from their country. Similarly, in 1970-71 when the Hashemite Kingdom of Jordan was threatened by a leftwing uprising of Palestinian militants of PFLP, the kingdom massacred thousands of Palestinian refugees and demolished their camps. This massacre is remembered as Black September by Palestinians. In 1988, Jordanian government revoked the citizenship of millions of Palestinians. On the other hand, the sheer hypocrisy of Turkey’s Erdogan was also on display in the aftermath of the deal’s announcement. He termed the deal “a stab in the back of Palestinians” and threatened to suspend diplomatic ties not with Israel (Turkey and Israel have diplomatic ties since 1949) but with UAE.

History repeats itself but on a higher scale and this aphorism is a befitting description of Donald Trump’s son-in-law and Senior Advisor Jared Kushner. He is a real-estate developer with no experience of diplomacy. 73 years ago, the British imperialists sent a lawyer named Cyril Radcliffe to India. He was assigned the task of the demarcation of borders of India and Pakistan. This man had never been to India in his whole life. He knew nothing of the place he was sent to. He completed the task in a week and went back home. His demarcation of borders led to one of the most horrible religious slaughter of modern times claiming more than 3 million lives. 73 years later, another man, Jared Kushner, is tasked with the development of Middle East peace plan. During the consultation, he famously said, “Don’t talk to me about history. I told the Israelis and the Palestinians not to talk to me about history too.” Not surprisingly the plan that he has come up with will usher in everything but peace.

However, diplomatic manoeuvres and intrigues have brought no respite in the plight of the Palestinian masses. The struggle for the emancipation of the Palestinian people can only be a mass revolutionary struggle. This emancipation can’t be attained through diplomatic intrigues. History is witness that whenever the Palestinian masses rose up in the mass struggle, the Zionist state had to submit and give concessions. The first Palestinian uprising commonly known as First Intifada of 1987-1993, proved that there is no alternative to mass struggle. This uprising was a turning point in the Palestinian struggle. The ensuing mass protests and above all the general strikes in the occupied territories brought the Israeli economy to a grinding halt. Subsequent events compelled Israel to come to the negotiating table with PLO. The Oslo accord and formation of Palestinian Authority over Gaza strip and the West Bank with limited autonomy was the by-product of the mass uprising.

The advent of Arab spring shook all the despotic regimes in the Arab world to their foundations. The rotten regimes fell one after another like house of cards. The mass uprisings transcended all the artificial borders demarcated by British and French imperialisms about a century ago. Even Israel was engulfed by these mass protests. The revolutionary movement in Egypt had so profoundly impacted Israeli society that the protestors in Tel Aviv had coined a famous slogan “Walk like an Egyptian” which reflected the heat of the revolutionary upheaval engulfing the whole region and beyond. For the first time in modern history, the whole of the Middle East and North Africa were united in one voice against the despotic, authoritarian and reactionary Arab regimes. The masses had trampled all the religious and sectarian divisions induced by the imperialist powers. These revolts were beacons of hope for the oppressed Palestinian masses. Unfortunately, the lack of a genuine revolutionary leadership thwarted the overthrow of capitalist regimes. The powerful mass revolt dissipated in the air. Had there been a genuine revolutionary Marxist leadership, it could have integrated all the movements of the Arab world in one united anti-capitalist movement transcending all artificial borders. Sadly, the movement was derailed and the imperialist powers intervened to crush the revolt and imposed a dark reaction in connivance with their local stooges.

The experiments of the last 73 years have recurrently proved the redundancy and obsoleteness of finding the solution of Palestinian issue within the confines of the capitalist system. During the First World War, the British and French imperialisms dismembered the Middle East through the Sykes-Picot treaty and divided the region between them to plunder their resources. Unnatural borders were drawn with complete disregard to local communities and ethnicities which sowed the seeds of future conflicts. The Balfour declaration of 1917 issued by the British government, which envisaged a separate homeland for the oppressed Jews, was to become a nightmare for the whole region. Over the decades it has been demonstrated with utmost clarity that it is completely impossible to find a viable solution to the oppression of oppressed communities within the existing capitalist property relations. The establishment of Israel as a separate homeland for Jews has caused a never-ending conflagration in the region. The two-state solution of Palestinian conflict is no solution at all. Even the imperialist powers themselves have virtually abandoned the idea. The Trump Peace Plan or “the deal of the century” will reduce the future Palestinian “state” to a tiny community in ghettos at the mercy of the Zionist state of Israel. That’s why there is no way out in the existing socio-economic order. Only a socialist overthrow of all the capitalist states in the Middle East can guarantee an independent homeland for Palestinians. The overthrow of capitalism will pave the way for a voluntary socialist federation of the Middle East, thus dismantling all the artificial borders. A voluntary socialist federation of Middle East is not a utopia or wishful thinking rather it is the only way-out for all the oppressed masses of this region whether it is the Kurds, Palestinians, Yazidis or other oppressed communities. Recently the mass movements in Iran, Iraq and Lebanon had once again erupted. The movement in Lebanon has toppled another government. A successful overthrow of capitalism in any one country of the region could ignite a wildfire of mass movements that would trample all the rotten capitalist regimes paving the way for a voluntary socialist federation of the Middle East.