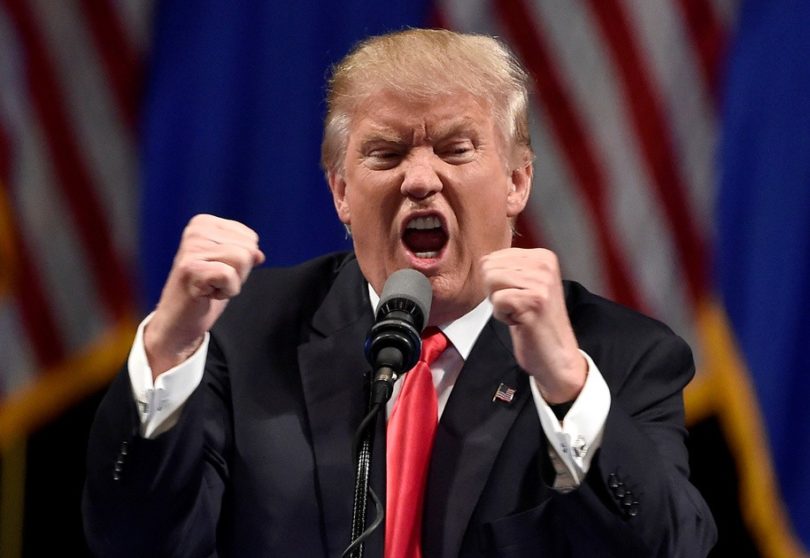 The election of business tycoon Donald Trump, the depraved billionaire a man who was openly racist, misogynist, who unashamedly displayed hostility towards Gays, Disabled, Blacks, Latinos and Muslims has sent a political seismic shockwave across the globe.

Experts in the US and across the oceans in Europe, Middle East, Asia, Australia and the Far East were predicting a comfortable victory for this dangerous billionaire’s rival, Hillary Clinton, another sorry specimen of the American Washington establishment.

There was a clear display of lack of confidence on the part of the American working class in the established political parties and the two presidential candidates. The voter participation remained stagnant despite repeated panicked appeals by both sides to get out the vote. Only 56.9% of eligible voters bothered to vote, a far lower rate than most developed countries. Tens of millions abstained because the votes were not going to make a difference and change anything.  As a percentage of eligible voters, Clinton received 26.27% (60,839,922) of all votes compared to Trump’s 26.02% (60,265,858). This is the 5th election since 1820 when the winner of the popular vote lost the presidency. Donald Trump received 667,646 fewer votes than Romney did in 2012, but Hilary Clinton received 5,075,873 fewer votes than Obama did in 2012.

Hillary co-engineered, along with Barak Obama, a foreign policy that sees America engaged in seven discreet “military engagements” across the globe with domestic blowback being virtually non-existent. In short Hillary Clinton, while not preferred by Republicans and widely disliked by the public, represented an acceptable candidate to the establishment of both parties.

Yet despite this historically unprecedented show of unity between the two parties Trump managed to capture the presidency by defeating first the Republican and then the Democratic parties in a clear repudiation, not only of Mrs Clinton but also of President Obama. The rise of Trump can be explained, in the final analysis, as a story of the decline of American and Global Capitalism. Trump’s slogan, “Make America Great Again”, represents more than some vague nostalgia about middle-class values and American pie. Trump tapped into a rising wave of discontent that ultimately has its roots in the decline of capitalism.

Anxieties ran strong among Hispanics, African-Americans, Muslims, immigrants, women and others who had felt disparaged or demonized by Mr Trump, who used harsh and racially charged language in ways that upended mainstream politics. The fact that a Ku Klux Klan newspaper had endorsed Trump, symbolized the sense of shock that he would now lead a vibrantly diverse country.

Trump also won over millions of voters who had once flocked to Obama’s promise of hope and change, and who placed their bets on Trump to dampen the most painful blows of globalization and trade, to fight special interests, and to be heard and protected. Twelve percent of Mr Trump’s supporters approved of Mr Obama, according to the exit polls. Trump smashed through the Democrats’ supposed electoral “blue wall” — the 18 states carried by Democrats in every election since 1992, such as Michigan and Pennsylvania, plus the diverse and well-educated parts of the country that Mr Obama attracted in his two races, like New Mexico, Nevada, Virginia and Colorado.

Hillary’s emails and particularly the intervention of the head of the FBI at the 11th hour undoubtedly had a negative impact on Hilary’s campaign.  But this was not the decisive reason why Clinton lost. US and world capitalism has been on the offensive against the working class in the US and internationally now for decades. This offensive became intensified after the 2008 financial crisis and the recession that it triggered pushing the world capitalist economy into deeper crisis resulting in deep cuts in wages, benefits, working conditions and lifting and shifting production from the advanced capitalist countries such as the US to the low-wage countries like China, Vietnam, countries that are free of obstacle to profit particularly higher rate of profits as these countries are free of trade unions and regulations.

Massive cuts in wages and other concessions have decimated the living standards of US workers. This had a huge effect on the organised working class and the trade union sector of the Democratic Party. It is not a coincidence that every media outlet has been referring the Midwest as the “rust belt”. The two capitalist parties of the US carried on with their global capitalist offensive. The support they counted on and expected from the trade unions was alienated and eroded as the trade union bureaucracy’s ability to convince their members to vote for a party that has been an integral part of the offensive against them diminished.

Clinton with her ties to Wall Street and her 30 years in Washington and her husband as a two-time former president was just not able to present herself as somebody who would fight for workers’ interests and as a symbol of change or as an outsider to Washington. Trump was more able to do this. But over and over, Mrs Clinton’s weaknesses as a candidate were exposed. She failed to excite voters hungry for change. She struggled to build trust with Americans as she strained to make a persuasive case for herself as a champion of the economically downtrodden after delivering perfunctory paid speeches that earned her millions of dollars.

The election result was a historic rebuke of the Democratic Party from the white blue-collar voters who had formed the party base from the presidency of Franklin D. Roosevelt to Mr Clinton’s. From Pennsylvania to Wisconsin, industrial towns once full of union voters who for decades offered their votes to Democratic presidential candidates, even in the party’s lean years, shifted to Mr Trump’s Republican Party.

On the contrary, the contempt and outright hatred the Republican Party base have for the Washington elite and Wall Street, the top layers of the capitalist class and their international trade policies, and their offensive against the working class helped Trump. A powerful demand for change developed. But Clinton and the Democratic Party could not present themselves as an agent for change. Thus the basis for an alternative in US political life was created.

What’s as important is that it was the thirst for change that contributed greatly to the Trump victory and that the Democrats were not seen as a party for the change.  Both the Trump phenomenon and the rise of Bernie Sanders in the Democratic Party are products of this mood for change. Trump won 80% of the 4 out of 10 voters who said that the ability to bring about change was the most important quality for their candidate in this election.

There is no doubt Bernie Sanders campaign galvanised the American primary election. Workers and youth, in particular, flocked to Sanders campaign. The might of the Democratic Party came against Sanders and they conspired and tried everything in the power to prevent Sander’s nomination.  The wiki leaks the Democratic Party Convention clearly showed what depths the American capitalist class was prepared to go to protect its interests. Bernie’s supporters were not inclined to give in so easily. Before the opening of the carefully stage-managed convention, large crowds marched across Philadelphia chanting: “Bernie beats Trump!” “Hell no, DNC, we won’t vote for Hillary!” and even “Hell no, DNC, party of the bourgeoisie!”

Bernie Sanders’ betrayal of his supporters is another factor in this situation. Two-thirds of Sanders’ supporters refused to support Clinton.  There are reports that one-third of Bernie supporters went over to Trump with the rest going to the Greens or other fringe candidates or stayed at home. Sander’s capitulation played a part in leaving the door open for Trump.

Trump presidency will be based on the most ruthless section of the American capitalist class and the representative of the working masses oppression. Trump is lining up a squad of billionaires to serve in his first cabinet. Hedge funders, heiresses, bankruptcy bankers and baseball barons, white supremacists Klu Klux Klan (KKK) supporters are being tipped for top positions in the new administration.

He offered Lieutenant General Michael Flynn the position of national security adviser. Flynn is well known for his anti-Muslim worldview, having called Islam a “cancer” and saying, quote, “fear of Muslims is rational.” Flynn served as the director of the Defence Intelligence Agency under President Obama, during which time some of his subordinates invented the term “Flynn facts” to refer to the false claims Flynn frequently made, including claiming Sharia law was spreading in the United States.

He has named Kansas Congress member Mike Pompeo as CIA director. Pompeo has opposed closing Guantánamo Bay prison. In 2013, he visited the notorious U.S. prison and said of the prisoners who were on hunger strike, “It looked to me like a lot of them had put on weight.” He’s also a vocal opponent of the Iran nuclear deal.

His Attorney General is Alabama’s Senator Jeff Sessions. Sessions is a former prosecutor who was elected to the Senate in 1996. As a senator, he’s consistently supported the anti-immigration legislation. In 2010, he was a leading proponent of the efforts to repeal the 14th Amendment, which grants citizenship to everyone born in the United States. Sessions has also been a vocal opponent of the Voting Rights Act. In 1986, President Ronald Reagan nominated Sessions for a federal judgeship, but he was denied confirmation because of his history of racist comments, including reportedly saying he thought the Ku Klux Klan, “was OK until I found out they smoked pot,”.

His preference for secretary of commerce is said to be Wilbur Ross, 78, a former banker and investor worth an estimated $2.9bn. Ross made his name as “the king of bankruptcy”, buying up distressed assets and restructuring them, particularly in the steel and coal industries in the American rust belt.

Another billionaire is Betsy DeVos, a big Republican donor and Trump’s choice for education secretary. The DeVos family founded Amway, a giant health and beauty company. Betsy’s father-in-law, Richard DeVos, is worth an estimated $5.1bn. Her brother, Erik Prince, a former Navy Seal, founded Blackwater, a private military company that played a controversial role in the war on terror.

His first choice for Treasury secretary is thought to be Steven Mnuchin, a former hedge funder. Mnuchin and Steve Bannon, Trump’s chief strategist, both made significant fortunes working at Goldman Sachs, the bank that Trump made a specific point of targeting during his campaign.  Several of Trump’s other choices are also exceptionally rich like Mitt Romney, who ran for the presidency in 2012, Rudy Giuliani, the former mayor of New York – both of whom are not only multimillionaires but also have shady links with questionable companies.

There is no doubt Trump will begin his presidency with capitalist attacks on the working class. He will initially raise the confidence of the most right wing and reactionary forces in the country. But he will also force increasing opposition forces to stand up and take a stand.

We have already witnessed nationwide protests on university campuses immediately after the election results were announced. These protests went on continuously for more than three days and were brutally suppressed by the authorities. Students marched against Trump with signs bearing slogans like “Not my president.” Protests were seen in Oakland, Chicago, Philadelphia, Seattle and New York, where demonstrators converged in Midtown Manhattan in front of Trump Tower, the home of the president-elect. Protests also took place in high schools and colleges across the country.