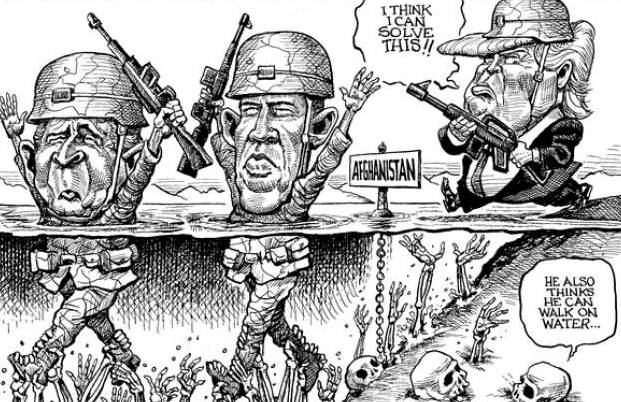 Donald Trump announcing his South Asia policy ruled out a hasty withdrawal of its troops from Afghanistan. Trump, resisted his advisors initially, spurred on by Steve Bannon his chief political strategist, Trump tried hard to find an alternative. Bannon was trying to promote a scheme devised by Erik Prince, the owner of the notorious security contractors firm Blackwater, to replace US troops in Afghanistan with 5,000 highly paid mercenaries. However, on August 18th, Mr Trump finally acquiesced to his national security team’s plan to send around 3,500-5,000 additional troops to Afghanistan. Under a crisis-ridden system, the more things change, the more they remain the same. Bannon had to resign from his post and leave the White House. Vice-president Mike Pence told Congress that 3,900 almost 50 percent extra soldiers would be sent to bolster the 8,400 there already.

Trump in his speech also warned Pakistan. He declared,

“We can no longer be silent about Pakistan’s safe havens for terrorist organisations, the Taliban, and other groups that pose a threat to the region and beyond…Pakistan has much to gain from partnering with our effort in Afghanistan. It has much to lose by continuing to harbour terrorists…we have been paying Pakistan billions and billions of dollars at the same time they are housing the very terrorists that we are fighting.”

At least Trump removed the garb of diplomatic hypocrisy most US presidents in the past attired. ” We are not nation building again. We are killing terrorists… we will no longer use American military might to construct democracies in far away lands, or try to rebuild other countries in our own image – those days are now over…Instead, we will work with allies and partners to protect our shared interests. We are not asking others to change their way of life, but to pursue common goals…” He didn’t even spare the Afghan government. “Our support is not a blank cheque…our patience is not unlimited. We will keep our eyes wide open.”

Just hours before Trump’s remarks there was a stark reminder of the Taliban’s reach when a missile hit Kabul’s heavily fortified diplomatic zone. According to a report by SIGAR, a US Congress appointed special committee, “The proportion of the country under uncontested government control had fallen during the 12 months to November 2016 from 72% to 57%. The attrition of Afghan security forces, say American commanders, is occurring at an unsustainable rate. In the year to November, 6,785 Afghan troops were killed and another 11,777 wounded. The Afghan National Security Forces have 370,000 troops and police. Between 2015 and 2016, 19 Americans were killed in action.”

Trump’s maiden speech reeks of desperation rather than any real optimism in resolving the conflict after imperialist aggression in 2001 and harrowing war which followed. This war has been devastating an already traumatised Afghanistan for last sixteen years. After all those years of this internecine conflict and bloodshed, the regime cannot expand its writ and the Taliban keep attacking but cannot return to power. Al-Qaeda still lurks in the shadows. The Islamic State is gaining ground in some regions. All kinds of power brokers jockey for their piece of the lucrative opium trade that continues to reach record levels.

The imperialists have been looking for an exit strategy for at least a decade. Inspite of more than a trillion dollars invested thus far survival of the puppet Afghan regime of Ashraf Ghani government is highly doubtful after imperialist withdrawal. More troops will not alter the basic dynamic of the conflict. It was the commander of the US and Nato forces in Afghanistan (20025-2009), General Stanley McChrystal, who in 2009 had accepted defeat of imperialist aggression in Afghanistan and resigned.

P.J. Crowley is a former US Assistant Secretary of State commented on Trump’s speech saying, “Notwithstanding his desire for political wins, the Afghan war is not going to end anytime soon, certainly not in his first term. He needs to tell the American people that US and Nato forces will still be in Afghanistan in 2021. Both Mullah Omar, the Taliban’s leader at the time of the 11 September 2001 attacks, and Bin Laden died (the al-Qaeda leader killed by the US) on Pakistani soil. That is not a coincidence. There is no prospect of success in Afghanistan without dealing with Pakistan’s duplicity.”

Donald Trump’s stance over Pakistan was not surprising. In reality, it exposed the weakness of US imperialism. The cutting off military aid to Pakistan would not have worked anyway. In the past acts and Congress resolutions of withholding this aid has had little effect on the country’s deep state. American administrations have been accusing Pakistan for years of ‘running with the hare and hunting with the hounds’. This speech was a vociferous but hollow rant of a leader of an imperialist empire in historic decline. Hence a hollow warning was all that he could muster. The CIA being the architect of vicious Islamic fundamentalism and dollar jihad in which they employed the Pakistani deep state as a conduit is too often repeated. But the crime of that US imperialism to destroy the 1978 Saur revolution in Afghanistan comes back to haunt them again and again. Now their Frankenstein monsters are striking them with a vengeance.

Pakistan’s spooks are not only aware of this intrinsic weakness of the US but are conscious of their relevance in this conflict for the imperialists. They are not going to heed Trump’s shallow warnings particularly with the Chinese patronage they embrace. Nor will they give up their policy of “strategic depth” when everybody is preying in the territory that is perceived by them as Pakistan’s domain. Trump’s rhetoric of involving India for the job is ridiculous, to say the least. It will further conflagrate the conflict between the two nuclear armed South Asian neighbours already spiralling out of control. The Indian bourgeois has its hegemonic designs on Afghanistan. The largest investor in Afghanistan with stakes in oil, gas, copper and other projects is China. Hence it is a principal participant in the conflict. However, it refuses to get directly involved in the Afghanistan’s internecine war.

China’s swift rebuttal against Trump’s remarks on Pakistan shows its deep involvement and sensitivity to any threat to its one belt one road project in the region with a massive investment of 900 billion dollars. But the troubles of the western imperialists are compounding. The Economist wrote, “Perhaps most worryingly, Iran and Russia, always on the lookout for opportunities to undermine Western interests, are now working together to fund, arm and shelter the Taliban.” One wonders how many great games the impoverished and tormented people of Afghanistan can endure. All these stakeholders operate with their proxies comprising of the so-called non-state actors that are bestial terrorists mafias’ ravaging the region.

The involvement of the Iranian aristocratic clergy particularly in the south and eastern regions of Afghanistan is a serious intervention through their sponsored proxies.  The Saudi monarchy and other Gulf and Arab states have their interventions and stakes in the conflict. In this regional climate, how can the Pakistan’s deep state remain aloof when its geographical and socio-cultural affinity with crucial regions of Pakistan is historic and innate? The imperialists cannot subjugate the Pakistani state nor can the Pakistani capitalist regimes and structures can totally survive without US support, inspite of huge Chinese investment and ‘deep friendship’.

The gruesome atrocities of the cruel religious terror and proxy wars for hegemonic ambitions of the regional and world powers are fuelling this mayhem. These are the ramifications of this system of greed, plunder and oppression. The wars and negotiations have only ended up in even greater disasters. Bourgeois states have an inbuilt instinct of possession and expansion. Alliances between these states can suddenly change in response to their strategic pursuits of vested interests.

The ordinary people don’t figure in their game plans. These calamities and devastations are not the destiny of the peoples of the region. But achieve peace and prosperity they shall have to take their destinies into their own hands. The toiling classes that are the victims of these conflagrations shall awaken and arise out of the stupor imposed by the monstrous ruling despots of these lands. Only through a united class struggle cutting across and overthrowing the domination of the warring vultures of fundamentalist terror, imperialists and the repressive states can their emancipation be realised.