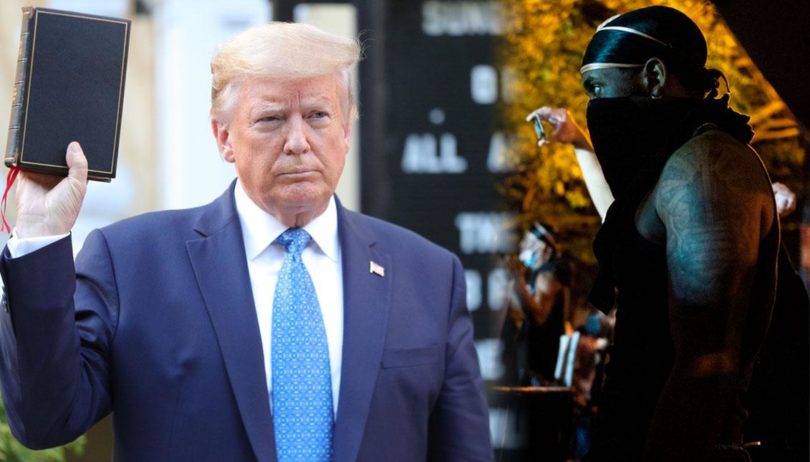 On Monday afternoon, on the seventh day of the protests that became a rebellion and reached more than 350 cities in 23 states around the United States, Trump spoke from the gardens of the White House. In the background, the voices coming from the huge protest could be heard, and the sound of police repression. In a brief statement, Trump presented himself as the president of “law and order” and called on governors to “dominate the streets” with an “overwhelming presence of law enforcement” and threatened to deploy the army to do so. 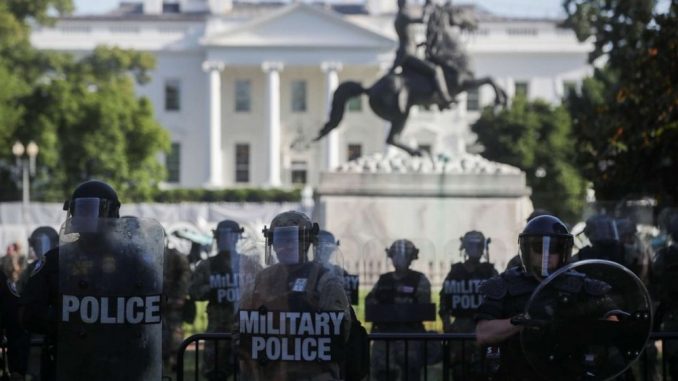 Trump’s speech is clearly belligerent. Bible in hand, he has launched a campaign against the radical left, anarchists and anti-fascists whom he blames for the protests. He has even threatened to declare “antifa” a terrorist organization. In his Monday speech, he said that he would invoke the Insurrection Act of 1807, which would give him the authority to surpass state governments in the deployment of federal forces to face acts of rebellion. This law was used in 1992 during the protests in Los Angeles following the acquittal of the four police officers who had brutally beaten Rodney King.

Despite Democrats’ criticism of his speech, they have been putting those same words into action in the cities and states they govern. They have deployed the national guard in the states and established curfews to set loose night time repression. In New York State, Democratic Governor Andrew Cuomo urged New York Mayor Bill de Blasio, also a Democrat, to mobilize the entire city police force, which has around 36,000 officers. De Blasio, for his part, blamed the protesters after a police vehicle ran over a crowd.

Democrats have also been outspoken when it comes to criminalizing social protest. After two days of protests, the Mayor of Minneapolis and the Minnesota Governor, both Democrats, argued that the protests were no longer about George Floyd and that they were being driven by “out-of-state agitators.” The Democratic mayor of Atlanta had a similar speech after the protests in that city. The policy of discrediting the protest is the necessary discourse to justify the brutal repressive escalation.

This repressive escalation has generated at least 4,000 arrests across the country. It also led to the murder of David McAtee, a 53-year-old black man. He was killed by gunshots fired by the police while dispersing a crowd in conjunction with the National Guard. At the time of the shooting, the policemen did not have their body cameras activated.

If something has been proved in the last week, it is that both Republicans and Democrats are the guardians of capital, and they do not hesitate to deploy all the force at their disposal to defend those interests. Perhaps the most pathetically clear manifestation of this have been Biden’s statements calling on the repressive forces to “shoot to the knees” and not kill, as a way to differentiate himself from Trump.

The repressive response has not yet managed to stop the development of this historic movement. In recent days we have seen how it continues to grow, reaching more than 350 cities. The image of the White House surrounded by protesters as Trump spoke has travelled the world. And international solidarity is also growing, which is increasingly important in the context of the repressive escalation. Solidarity actions have taken place around the world.

Despite the campaign to discredit the protests and increasing repression, they have immense support in the general population. In a survey conducted between May 31 and June 1, 54% of people said they supported the protests, against 22% who rejected them. 55% believe that police violence is a bigger problem than violence against the police, while 30% have the opposite opinion. 43% have negative views of Trump’s response to the situation, while 30% rate it positively.

Without a doubt, a new moment has opened in the United States. As the struggle grows, so will the polarization. It is essential to resist the authoritarianism of governments, to fight for freedom of all the detainees and against their prosecution. As well as mobilizing against any attempt by Trump to deploy repressive forces.