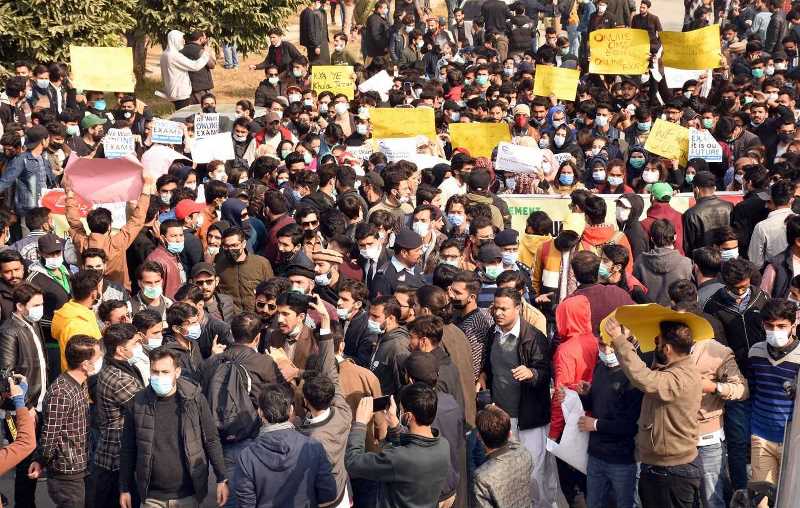 The students’ movement in Pakistan has witnessed a sudden upsurge in the last month that was brewing from years. Universities across Punjab and the country’s capital Islamabad were in the grips of a series of student protests against on-campus exams and fee hikes. In response, the state, as usual, resorted to unrestrained repression and violence.

As the rate of Coronavirus cases started to rise, the government decided to move towards a second lockdown of educational institutions on 24th November, 2020 and the second phase of online education began with it.

During the first lockdown, universities started using online classes as an alternative mode of instruction, which no doubt is an advanced development in the field. But in a technologically and culturally backward country where more than two-thirds of the populace has no access to internet, and in peripheral areas of Gilgit-Baltisitan, Khyber Pakhtunkhwa and Balochistan people don’t even have access to electricity let alone internet, it proved to be a flop show. Students in the peripheral areas came out in protest against online classes and demanded the provision of infrastructure, free internet and laptops, absence of which would only amount to a violation of their right to education. The repressive state machinery responded with police violence and arrests. “Do what you will, we’ll not be silenced, we will continue to fight for our basic human rights, we’ll struggle till the overthrow of this educational system based on class differences”, said Dr Mahrang Baloch, a Baloch student leader, while being shoved into the police van along with other protesting female students.

This situation just went on to show the divide between the governing and the governed. The ruling clique is so disconnected from realities of people’s lives that it imposes policies for the implementation of which neither does it have the adequate infrastructure nor do the people possess the required resources. It also aggravated the sense of deprivation of the oppressed nationalities, but at the same time it helped raise class-consciousness by revealing the class-privilege enjoyed by the ruling class with complete disregard for the miseries of the working people.

The recent upsurge was not against online classes but against on-campus exams. On January 15th 2021, the federal education minister Shafqat Mehmood announced that the universities will be opened from 1st February. As it is the end of semester, University administrations decided to take on-campus exams and issued respective notifications.

Students of National University of Modern Languages (NUML) came out in protest against this decision. Their demands included online exams and reimbursement of 50 percent of their online semester fees. Next were the students of Bahria University and then Air University followed by National University of Science and Technology (NUST), National Defence University (NDU) and FAST University, which are among the most expensive institutes in Pakistan, the administration threatened them with lodging FIRs but the students were unfazed. Gaining confidence from these valiant struggles, students from campuses across Punjab also started to rise up.

Administrations of  Khawaja Fareed University, Sahiwal University, Bahauddin Zikriya University and University of Sargodha were so horrified that they surrendered to students’ demands without even putting up a fight. University of Management and Technology submitted to students’ demands after 14 hours of sit-in. Students of Government College University Faisalabad (GCUF), Government College Women University Faisalabad (GCWUF) and NFC Institute Faisalabad staged protests outside their respective campuses on January 25th. GCUF quickly submitted to students’ demands. GCWUF’s administration was stubborn and threatened the female students with strict disciplinary action and even tried to lock the students inside hostels, but after 10 hours of sit-in it had to back down due to the ever rising morale of students. NFC students staged a peaceful sit-in which went on for 12 hours, but the administration paid no heed to their demands. On the second day, the police intervened, baton charged and arrested the students. It can be seen in footages that the police were wearing riot gear as they assembled to crush the unarmed and peaceful students, which just goes on to show how afraid the state is of any movement and also its fascist tendencies.

The students of University of Management and Technology (UMT), Lahore staged a huge protest for the Online Exams the management at first reacted with violence and police repression, some injured students were admitted to the hospitals but the management have to bow down to the mighty power of students and announced online exams although the lodged FIRs against few students. The dastardliest acts of violence and repression were witnessed at the University of Central Punjab (UCP) where campus guards attacked the students, crushing skulls and severely injuring many. Even the personal guards of the owner, Mian Amer Mehmood were deployed to attack the unarmed students. Mehmood is a powerful businessman, owner and founder of Punjab groups of colleges, also referred to as Malik Riaz of private educational sectors. Malik Riaz is a real estate tycoon who made his fortune through predatory practices backed by the establishment. The police also baton charged the students and arrested 36. At first, the court instead of upholding the principles of justice rejected their bail applications and put them in police custody for more torture; no action was taken against Mehmood or his personal army. “The ruling class has used the state machinery as an instrument of repression to protect the interests of the private school mafia who have turned education into a business for the extraction of enormous profits. Once again, it stands proved that the state is just a body of armed men to protect the interest of the ruling class. Free and modern education is a fundamental human right. Now the time has come to fight for that right”, said Awais Qarni, central organizer Revolutionary Students Front (RSF) and Editor Asian Marxist Review. But later, with a strong countrywide campaign for their release and solidarity protests the courts had to release the students.

The Revolutionary Students Front (RSF) is aiming to assemble the students under the following demands:

The recent developments with all their achievements and setbacks are a step forward for the students’ movement in Pakistan. Students who won their demands will experience a boost in their morale, those who did not will reflect and learn from their mistakes only to come back stronger. Students will also come to understand the need for organization so that they can prepare themselves for the upcoming fights against fee hikes and budget cuts, the present government has been imposing neo-liberal policies on the directions of IMF and in light of this it can very well be expected that it will further slash the budget for education and quotas for students from peripheral areas. An important role in this regard will be played by the Students’ Action Committees which are being formed in different cities and institutes. All the progressive student organizations need to assemble themselves on this platform to help students organize.

Students’ Action Committees need to incorporate the “Restoration of Students Union” as their central demand, connect and organize all other struggles and demands with this primary demand. The vanguard of the student movement will not only have to understand the significance of student unions itself but also continuously explain it to others. It is only through political power and agency that students will be effectively able to assert themselves on those in power. The students’ movement will also have to win the support of the working class, as Dr. Lal Khan once explained, “The revolutionary process can be ignited by the youth and students but it is only under the leadership of working class that it can be taken to its logical conclusion… the overthrow of this oppressive system.”