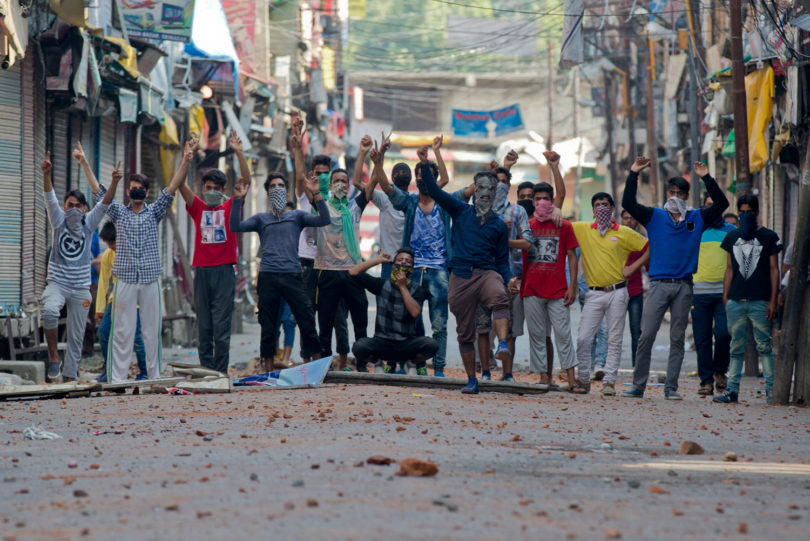 Some of the brightest moments for South Asia in 2016 included the September 2nd historic general strike of more than eighteen million workers brought India to a standstill. The February strike of the PIA workers in Pakistan that grounded the airline was a manifestation of the power of the working class when it moves into action. The JNU student’s uprising and challenging the BJP regime demonstrated the potential power of the students’ struggle. But above all, it was the magnificent movement of the youth and the ordinary people of Kashmir that shook and mighty Indian state and those of the region.

One of the world’s most chronically festering wounds of occupation, repression and mass defiance is Kashmir.  It’s the biggest occupation by the largest democracy in the world that rules over the highest concentration of poverty on the planet. For seven decades violent repression by the Indian state has become more gruesome.  But in 2016 mass resistance rose to new heights. These eruptions smashed censors of the corporate media and laid bare the brutal tyranny of these reactionary elites.

The resurrection of the Kashmiri struggle on July 8th was another milestone in the people’s resistance against this occupation. The youth shrugged off the terror of life under jackboots of more than half-a-million army in the most densely militarised zone in the world. In the heat of struggle these youth discovered the power of mass protest that emboldened their hearts and minds. The fear of death now fails to hold them back. And once fear is conquered the second-largest army in the world can’t do much.

After decades of military occupation, the Indian regime’s worst fears have come true. It is now faced with resolute and daring mass protests of the kind it doesn’t seem to manage. In the long years under repression tens of thousands have been killed, mutilated, ‘disappeared’; tortured, blinded, raped and humiliated, the Kashmiri oppressed have come out with a seething revolt. Such a rage cannot be tamed or crushed into oblivion.

For all those long years, the Indian State tried every means to subvert, discredit, intimidate, purchase and violently suppress the longing for freedom. The ‘normalcy’ imposed through the barrel of a gun was always fragile and temporary. In those hiatuses of struggle, society’s silence was perceived as acquiescence by the rulers and portrayed as compliance by their subservient media.

The separatist and other Kashmiri leaders have been forced into a situation where now they are being guided by the movement. Syed Ali Shah Geelani who at a public rally proclaimed himself as the movement’s only leader faced such a mass outrage that within hours he had to retract his statement. The intensity of the current upsurge has made it impossible for the Indian bourgeoisie’s spin doctors to hammer out the same old claim that every upsurge of the masses in Kashmir is all doing of Pakistan’s ISI, or that people are being coerced into the resistance by Islamicist terrorists. Since the 1930’s the Kashmiri leadership from Sheikh Abdullah to Ghulam Abbas, to the various mainstream political parties or the Hurriyat have all ultimately betrayed the masses. However this time around, what has been graphically demonstrated is that it’s the people who are in charge and ultimately the real leadership will crystallise from the movement itself.

There have been several mass uprisings in the past, but none that have been so sustained and extensive. Most leaders appear acquiescently for debates in New Delhi’s TV studios, but have no courage to appear onto the streets of Kashmir. The movement’s sheer momentum exposed the weakness and demoralisation of the Indian state forces. The police were faced with a choice of either stepping aside or executing a massacre. They stepped aside. Not a single bullet was fired in several instances of confrontation with the marchers.

However with all the complications, imperfections, confusions, ebbs and flows along with the brutalities committed by the fundamentalists intruded in its fold, the decades-long struggle for liberation cannot be called pristine. Some cruelties such as the brutal killings of Kashmiri Pundits ensuing their exodus from the Kashmir Valley tainted it. However, the positive aspect of this upsurge has been the revival of some of the ideals of the founding leaders of this rebellion. Maqbool Butt one of the historic icons of the Kashmiri struggle who was executed on 11 February 1984 in the Tihar jail, New Delhi by the brutal Indian state was also not much liked by Pakistan’s establishment either. Butt associated the struggle for Kashmir’s liberation to the overthrow of capitalism and rejected obscurantism. Today’s youth is again relating liberation struggle with the attainment of health, education and employment, water, electricity and sewage; and with the ending of poverty misery and deprivation.

The British had left Kashmir divided and bleeding during the bloody partition in 1947. The ruling elites of both India and Pakistan incessantly try to erase from public imagination anything that questions their official chronicles on Kashmir. Indian and Pakistan’s official position on Kashmir is full of chauvinistic and jingoistic policies and rhetoric. Successive regimes keep assuring the masses of the legitimacy of their positions now being increasingly doubted. The rulers of India and Pakistan periodically whip up hostility against each other to crush internal dissent whenever the masses raise their heads. They can neither go to an all out war nor can their rotten socioeconomic systems allow them to usher in a durable peace. Kashmiris are the main victims of these games of war and peace.

The movement in Kashmir is a beacon of hope for the youth and toilers of the region. Its inspiration has been enormous. That’s what worries the rulers. For Kashmiris the support of the oppressed of the subcontinent is needed to break the yoke of occupation. For the working people and youth of the subcontinent it is their historic duty to support the movement and fight the regimes that perpetuate the repression on the Kashmiri masses.  This class unity in struggle is essential for the revolutionary victory that can put an end to occupations, exploitation and brutalities of the bourgeois states.