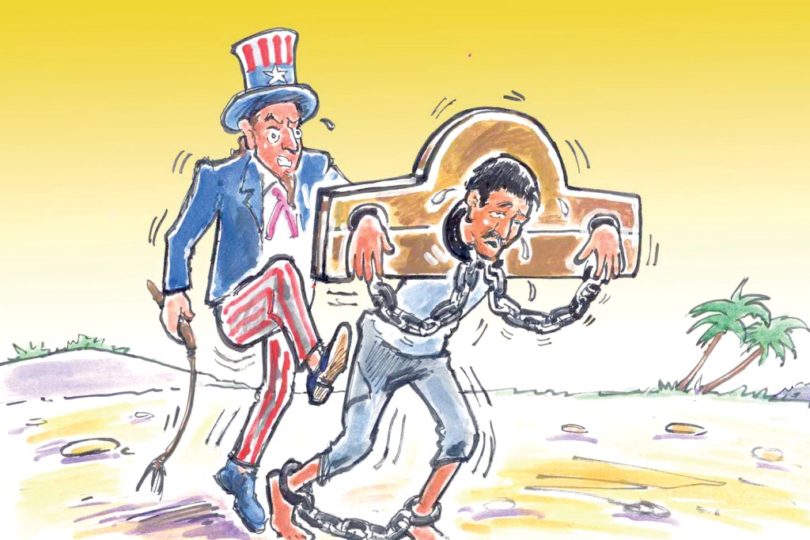 The Pakistani political and state elite is raising the old rag of sham sovereignty yet again. Prime Minister Nawaz Sharif criticised the drone strike that the US carried out in Balochistan earlier this week, and said that it was “a violation of Pakistan’s sovereignty… an issue that has been raised with the United States in the past as well.” The so-called hawkish Interior Minister Chaudhry Nisar Ali Khan couldn’t be left behind, calling it “totally illegal, not acceptable and against the sovereignty and integrity of the country.” He went further, accusing Washington of “sabotaging the peace talks with the Afghan Taliban.”

However, in a later statement issued by the foreign office in Islamabad it was announced that the “US had shared the information that a drone strike had been carried out in Pakistan near the Pak-Afghan border in which Mansour was targeted, with Prime Minister Sharif and Chief of Army Staff General Raheel Sharif after the strike.” This whole episode reeks of hypocrisy and an impotent rage of Pakistani rulers. After the Abbottabad operation by US seals in which Osama bin Laden was captured and killed, this latest incident again shows collaboration with imperialist masters on one hand and pretence of standing up for national sovereignty on the other. Hypocrisy and double standards are no less on the US side. US President Barack Obama called it “a clear signal to the Taliban and others… it has been confirmed that he is dead.” In a veiled threat to the Pakistani ruling elite he used his habitual diplomatic phraseology: “We will work on shared objectives with Pakistan, where terrorists that threaten all our nations must be denied safe haven.” But the next day US State Department Spokesman Mark Toner said in a briefing in Washington, “This was a strike directed against this individual, Mansour, in the Afghan Pakistan border region. We certainly do respect Pakistan`s territorial integrity.”

State and corporate media have propagated the political, territorial and economic sovereignty of Pakistan ever since its inception. However, under every political or military regime in this capitalist set-up, sovereignty has been breached and abrogated by imperialist powers almost at will. Those who paraded this so-called sovereignty for political purposes and to drive a wedge of patriotism and national chauvinism were in fact in collusion with these imperialist interventions. With the crisis of the state intensifying there are now growing evidences that sections have colluded and others were opposed not for patriotism but for achieving their share of material interests. This foreign policy crisis was confessed in an editorial of the most serious representative of Pakistan’s ruling class, “What makes it so easy for the US to violate the territorial integrity of Pakistan with a drone strike in Balochistan and a night raid in Abbottabad is not the superpower’s military superiority but the weight of global opinion that Pakistan is a country whose own actions make it possible for other states to disregard international law and arguments of sovereignty. If Osama bin Laden can live undetected for years in Abbottabad, Mullah Omar can allegedly die in Pakistan and Mullah Mansour can hold a Pakistani identity card and passport, the arguments for selective sovereignty, when it comes to drone strikes, ring hollow.”

It is not just the territorial but also the economic sovereignty of the country that has been breached consistently with an ever-increasing plunder by imperialist monopolies and states, and not least by imperialist financial institutions. The World Bank, IMF and other imperialist institutions that skim away the major portion of GDP in debt-servicing and astronomical interest rates dictate Pakistan’s economic policies. Even Pakistan’s most touted friend and benefactor, China, has been extracting Pakistan’s natural wealth, like gold and copper, from mines in Balochistan for several decades. With every project the Chinese ruling elite acts with an imperialist design plundering wealth and manpower of this country.

Gwadar’s financial sovereignty was given away by successive regimes that have ruled Pakistan since the start of this project. Ever since Chinese bureaucracy went down the disastrous road of capitalist counter-revolutionary restoration at the end of 1970s their lust for more profits and plunder abroad knows no bounds. Now the Sharif regime has given even more concessions to these Chinese capitalists to raise their rates of profit. Government approved on Monday sweeping tax concessions for Chinese operators at the deep-sea Gwadar port and businesses that would operate in the Gwadar Free Zone for up to 40 years to make the Arabian Sea port an important node in Beijing’s ‘One-Belt, One-Road’ strategic policy.

Western and particularly US imperialists have been plundering Pakistan throughout the latter’s 68-year history. Almost every Pakistani regime representing and dependent on capitalism for their perks and power voluntarily presented land, labour and resources to imperialists. Their only interest was the booty, commissions and kickbacks of imperialist corporations and states. And yet they had the audacity to shout patriotism and sovereignty of Pakistan all those long years as the masses continued to suffer. The task or the demand of national sovereignty has been different in various ages depending on the socioeconomic systems of states and societies throughout the history of class society.

However, with the advent of the industrial revolutions and formation of modern nation-states, national sovereignty attained an advanced diplomatic and militaristic dimension. It was supposed to be one of the fundamental tasks of the bourgeois revolutions that began in Europe in the post-medieval period. The other tasks included the agrarian revolution, advanced infrastructure for industrial development and growth, a secular state and parliamentary democracy in various shapes and structures. But in countries like Pakistan where the bourgeois came to power at the end of post-colonial rule, they faced a scenario where they were historically belated and economically incompatible with the expanse of imperialist economic and military hegemony. They not only failed to industrialise and modernise society but also in fact used religion to distract the masses from revolting against their corrupt rule.

Their incapacity to develop a profitable and healthy capitalism that could generate enough resources to build physical and social infrastructure resulted in crisis and turmoil we have witnessed throughout Pakistan’s history. Ruling classes have been corrupt, criminal and reactionary precisely because of their economic character. Meanwhile, society has staggered from one crisis to another with Pakistan becoming a sort of jelly state. There have been several mass movements that challenged this rotten, obsolete system. To preserve their tyrannical rule the elite’s waged intelligentsia and politicians whipped up national chauvinism. But masses have had enough of it; the reality of this sovereignty of the ruling classes has been exposed in the mass consciousness. Once the class struggle resurges and the masses enter the arena of history they will strive to achieve their economic, social and political sovereignty. Only by overthrowing this corrupt system and a socialist transformation of society can they be victorious.