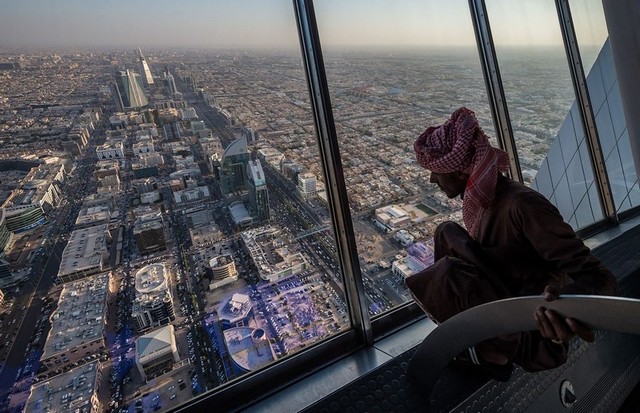 The rise and fall of empires had been a constant feature throughout the history of class society. Wars, revolutions, economic catastrophes and decay of the systems have been the root causes of the fall of these regimes. The tremors of the economic and financial crash of 2008 are still being felt across the globe. Even the fall in oil prices from its peak of $115 to $35 a barrel has failed to produce the dividends for the capitalist economies and empires. On the contrary, the oil producing countries have certainly felt the impact of lower prices on their growth rates, their trade figures and their public finances. Saudi Arabia, in particular, has been forced to impose austerity as it recently announced swingeing budget cuts to address an alarming deficit of 15 percent of GDP.

The deficit is a result of doling out riyals whenever they get into difficulties.

On the outbreak of the Arab revolutionary upheaval in 2011, King Abdullah bin Abdulaziz Al Saud sought to buy off local opposition with a $133 billion spending package, which included more housing and medical facilities, more welfare benefits, and bonuses for government employees. On coming to the Saudi throne in January, the octogenarian Salman bin Abdulaziz Al Saud also sought to buy popularity by handing out a two-month bonus to government employees and pensioners, resulting in a fall of $36 billion in the central bank’s net foreign assets.

King Salman’s son Mohammad bin Salman Al Saud has launched a harsh and aggressive strategy to restructure the kingdom’s oil-dependent economy, involving diversification, privatisation of massive state assets, including the energy giant Aramco — estimated to be the world’s most valuable company — tax increases, spending and subsidy cuts. This 15-year blueprint includes the creation of a two trillion dollar Saudi sovereign wealth fund, the largest of its kind. Overall, the plans aim to make the Arab world’s largest economy depend on investments rather than energy to fill government coffers in the years to come. The prince proclaimed, “The vision is a road map of our development and economic goals… without a doubt Aramco is one of the main keys of this vision and the kingdom’s economic renaissance.”

Economic reform has been discussed many times before but the urgency has grown since the government ran a record budget deficit of nearly $100 billion last year. 90 percent of Saudi Arabia’s budget relies on oil revenues, and this explains why it had to resort to a $10 billion five-year loan from a consortium of global banks — its first sovereign loan since 1991. Plans to boost non-oil revenues with taxes will take years to have an impact, leaving spending cuts and foreign investment as the main way to bring state finances under control.

Out of a total population of 30.8 million in 2015, over 10 million are foreign workers predominantly from South and Southeast Asia working in relatively low-paid jobs in oil industry, construction and services. The money they send home is important for their home countries. Pakistani workers remitted $9.1 billion out of Saudi Arabia in the third quarter of 2015. The inflow of migrant workers may now go into precipitous reverse. GDP growth averaged over five percent annually between 2006 and 2015, to fall well below two percent this year. Partly because labour rules make it hard and costly to fire Saudi citizens, layoffs in the early stages of a downturn tend to hit foreigners almost exclusively.

Meanwhile, government, lacking the cash to create public sector jobs for Saudis as freely as before, and worried that the official unemployment rate of 11.5 percent among them could rise, is intervening more heavily in the labour market to push Saudis into jobs previously held by foreigners. A top executive at a major Saudi company told Reuters in January that he wouldn’t be surprised if one million foreigners had to leave the kingdom by the end of this year. “The economic changes have started to pressurise the labour market, and this has triggered the start of the migration of a large segment of foreign workers,” said prominent Saudi economist Fadl al-Boainain. “Declining corporate profitability has made the foreign workforce a target for managements seeking to cut fixed financial obligations.” So far, layoffs have been concentrated in the construction sector, which employs around 45 percent of foreigners. Hit by shrinking state contracts and delays in payments owed to them by government, construction firms have been laying off tens of thousands of workers since last year.

However, even in one of the most totalitarian regimes where immigrant workers are the most oppressed there are eruptions of strikes and revolts. Over 55,000 Pakistani employees of the Bin Laden Group have not been paid their wages for three months, and they were protesting outside the construction company’s offices in Mecca province, setting buses on fire, the Saudi daily Okaz reported last Sunday. The protesting workers are among 77,000 foreign workers of company’s estimated 200,000 workers who have been issued exit visas to leave the country, and they have not even been paid wages for months. Those who have dared are now holding daily protests in front of the company’s offices. The mass sacking by Bin laden constitutes a 25 percent reduction of its total 200,000 workforce. The company, which was established in 1931 by the father of the late al-Qaeda leader Osama bin Laden, is one of Saudi Arabia’s largest employers and it has been responsible for large construction projects including universities, airports, plazas and towers in the capital Riyadh, and in the western port city of Jeddah. The Bin laden company may also be feeling the pinch because of a catastrophe at one of its projects last year, when a crane in the holy city of Mecca collapsed and killed 107 people.

The world around Saudi Arabia and wealthy oil producing Gulf States has been turned upside down in the recent period. The 2011Arab revolutions; the rise of Muslim Brotherhood hostile to the Saudi regime; the rise of the Islamic State in Iraq, Syria and Libya; the war in Yemen; the realignment of US and Iran, and Iran’s growing regional influence; and concerns that the US is trying to disengage itself from the Middle East, all of these have heightened fears among these despotic monarchs.

More than half the Saudi population is under 25 years old. Amongst large sections of these youth there is intense ferment and frustration with the monarchy. The first stirrings of social unrest are now palpable in Saudi Arabia. Howeve,r introduction of even indirect taxes may lead to demands for change that could undermine the autocratic system. Even if Saudi monarchs facing mass rejection of these policies try to reverse the austerity measures and introduce concession further ballooning the state debt it would be too little too late. The famous French politician Alexis de Tocqueville (1805-1859) once said, “The most dangerous moment for a bad government is when it begins to reform.” When reforms fail to deliver, it can provoke a revolution.