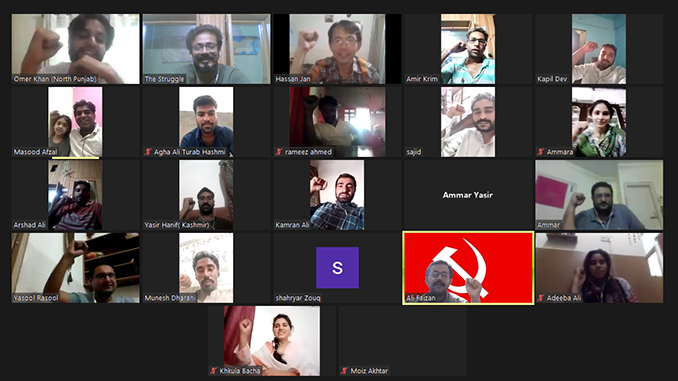 National Executive Committee of RSF met on Sunday. Organizers of Revolutionary Students Front (RSF) from all over the country from Islamabad to Karachi and Swat to Baluchistan participated in the meeting. The organizers of Jammu Kashmir National Students Federation (JKNSF) from Kashmir and Unemployed Youth Movement (BNT) also participated in the meeting. National Organizer RSF, Awais Qarni, led the discussion on the national and international political situation amid COVID crisis and developed the strategy for work in student and youth. Ammar Yasir chaired the meeting.

The whole world especially Pakistan is going through the worst period of turmoil, political and economic uncertainty. The attacks on students, youth and working-class have accelerated during the pandemic. Failure of online classes, dysfunctional exam policies, the haphazard reopening of institutes, fee and hostel issues have forced youth into a situation where they have no option but to organize a fight against this crooked system. Meanwhile, Pakistan is facing a historical unemployment crisis which will only get worse in time.

In such a situation along with a Student Action Committee (SAC), NEC recognizes the need for regional student action committees as well. NEC has also decided to start mobilization for JKNSF convention expected to commence in November which is dedicated to the struggle of comrade Lal Khan. NEC also welcomes All Pakistan Employers, Pensioners and Labor Movement’s call for the sit-in on 14th October in Islamabad and will ensure full fledge participation. The students’ workers’ unity against the oppressive system is the dire need of the time.

The NEC decided to organize regional and area Marxist schools for the cadre building of young comrades which will be followed by the National Marxist School in winter. It’s decided to build new units of RSF and JKNSF in the universities, colleges and schools as well to move forward for the conventions. The meeting concluded with the Workers’ Internationale.