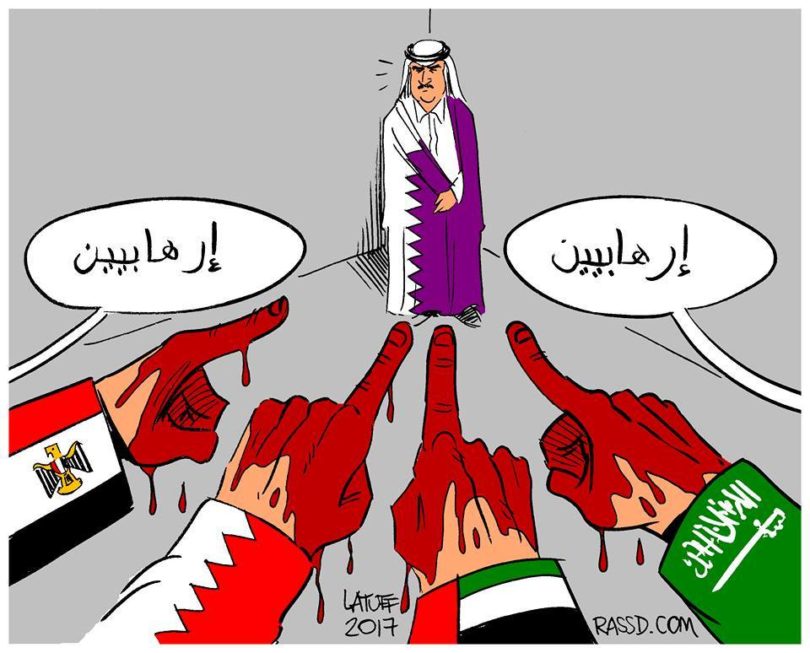 The diplomatic row between Qatar and main countries Gulf Co-operation Council (the GCC) coalition turned has worsened the crisis in the region. On June 5th, Saudi Arabia, the UAE and Bahrain announced they were not only severing diplomatic relations with Qatar along with the cutting of air, sea and land links. This infact means sealing off Qatar’s only land border to the Middle East. The relatively docile and seemingly irrelevant alliance of the GCC suddenly seems to be exploding with dangerous consequences. In the already strained Gulf dominated by the increasingly hostile rivalry between the Saudi monarchy and the Iranian Mullah aristocracy, this has morphed into an acute crisis very few had envisaged. Wednesday’s attack on Iran’s national parliament and shrine of Ayatollah Khomeini has been blamed on Saudi Arabia by the Iranian hawks. This can erupt into a hurricane of bloodshed and harrowing conflict in the Persian Gulf.

In 2014, these Saudi lead Gulf States had temporarily recalled their ambassadors from Qatar. But this time the retaliation against Qatar for the reasons not really elaborated harsh measures have been announced. There are reports of panic buying in Qatari bazaars as 40 percent of the food supplies to Qatar get transported via the land route through Saudi Arabia. Qatari nationals have been ordered to leave Saudi Arabia within days with future entry to be denied. Qatar’s 1,000-strong military force in the coalition attacking Houthi rebels in Yemen has also been expelled from this joint military alliance headed by Saudi defence minister Mohammad bin Salman, the favourite son of the present monarch.

The Saudi Arabian Press Agency (SPA) accused Qatar of “embracing various terrorist and sectarian groups aimed at destabilising the region, including the Muslim Brotherhood, Daesh (ISIS), and Al-Qaeda, promoting the ethics and plans of these groups through its media”. Saudi Arabia has claimed that Qatar is supporting Iranian-backed terrorist groups in the Saudi province of Qatif and in Bahrain. Although the Financial Times reported that a Qatari royal paid a billion dollars to an al-Qaeda affiliate for the release of relatives taken hostage while on a falcon-hunting trip to Iraq but the accusations of funding the Islamist terrorist outfits by rival Arab and Gulf States or their citizens have also been often enunciated in international media. Egypt quickly joined Saudi Arabia in cutting its links with Qatar. Yemen’s Saudi-supported government and the UAE-backed authority in eastern Libya also declared they are following suit. Mauritania also cut diplomatic ties and Jordan has downgraded its diplomatic relations with Qatar.

The Qatari monarchy has been nurturing ambitions to assert the state-let as a major power in the region infact challenging the Saudi domination amongst the GCC countries. It is the world’s second-largest exporter of natural gas and will host the football World Cup in 2022. The rising conflicts between these GCC countries and the contention for regional hegemony has been mainly executed through the support of various rival sectarian groups that act as proxies of these monarchies for enhancing regional influence. For decades, Saudi and Emirati rulers have blamed Qatar for breaking ranks with the six-nation Gulf Co-operation Council (GCC).

Qatar also finances and hosts the Al Jazeera, a media network that has gained a worldwide prominence and broadcasts the views of Arab dissidents of the Egyptian and GCC regimes. However, it shuns the voices of the Qatari dissidents. Qatar also hosts the largest US naval base, Al-Udeid, in the Middle East stationed on the road to the Saudi border. Qatari rulers rely on it as their best defence against invasion by land. Qatar has also in the last decade or more eclipsed Saudi Arabia as a regional arbiter to resolve disputes in the Gulf and Middle East, hosting warring factions from Afghanistan, Sudan, Lebanon, and the Palestinians’ reconciliation talks.

Qatar, Kuwait and Oman are the three GCC states that still maintain relations with Iran. This irks the other monarchies that are daggers drawn with the Iranian clergy supposedly on the religious sectarian basis. The Qatari ruler recently expressed reservations about Saudi Arabia’s new powerful prince’s increasingly belligerent stance against Iran. Qatari regime’s support for the Muslim Brotherhood that is a rival to the Saudi and Emirati sponsored Salafists in Egypt and elsewhere further sours the relations. Large financial aid from the Qatari monarchs supported the Muslim Brotherhood regime that came into power after the ebbing of the 2011 uprising in Egypt. However when the second revolutionary upsurge rattled the Morsi led Al-Ikhwan regime the military took power with the Saudi support. With general Fateh Al-Sisi in power and the Brotherhood ditched the Qatari rulers withdrew the 8 billion dollars aid to Egypt. But the Saudi’s came up with a hefty sum of 12 billion to prop-up the Sisi dictatorship.

However the US under Donald Trump seems to be becoming more of a Saudi cheerleader. Trump chose Saudi Arabia as the first foreign destination of his maiden official visit abroad. The Saudi’s organised a grandiose reception for Trump and even inviting leaders from 55 Muslim countries to Riyadh as the audience for his speech. They also doled out massive arms contracts for the US military industrial complex. Trump’s foreign policy advisers are presumably in favour of the UAE ruler’s quest for America to move its military base from Qatar to the Emirati Sheikhdom for years.

In this isolation, the Qatari elite could opt for Turkeys support as Erdogan is of a favourable opinion of the Muslim Brotherhood and opened a base in the Qatar last year. However, Erdogan might not dare to confront the Al Sauds at this delicate juncture. The main thorn in the GCC states mutual relations is also the South Pars, the world’s largest gas field managed jointly by Iran and Qatar that holds at least 43 trillion cubic metres of gas reserves.

Iran has also a defence pact with Qatar that obligates it to defend the Sheikhdom in the event of a Saudi attack. After the severe boycott of Qatar by most GCC states last week the Iranian officials are offering Qatar to send food shipments across the Gulf. Saudi Arabia led alliance’s aggressive stance can further drive Qatar into the already expanding Iran coalition in the region. This will escalate the dangers of a military conflict between the two major theocratic Islamic sectarian rival powers on the opposite shores of the Persian Gulf. Such a conflict can trigger a huge rise in oil prices generating a much deeper slump of the world capitalism.

Kuwait’s Emir, Sheikh Sabah arrived home after a short visit to Saudi Arabia on Tuesday during which he held talks with the Saudi King Salman bin Abdul Aziz to defuse an escalating crisis. This ‘peace initiative’ seems to have botched. Initially, Trump had tweeted: “Perhaps this will be the beginning of the end to the horror of terrorism!” However, the Washington bureaucracy toned him down. Just the following day Trump offered his services as a mediator between the feuding Arab monarchs. But it’s a protracted conflict that can metamorphose into a catastrophic militaristic clash. This burgeoning crisis is the outcome of the severe economic crisis that has hit the economies of these rich Gulf States with the collapse of the oil prices in the last few years. These are unstable regimes and their existence is threatened by mass internal revolts. They cannot afford to dole out goodies to their tiny populations anymore and the vast majority of the workforce comprises of immigrant workers that were already working in atrocious conditions.

Now as the funding for the construction and other projects is drying up and these workers are being deported. The new generation of these cruel and despotic monarchical rulers are going berserk with their foreign wars and misadventures of spreading their power in the region through proxies of Islamic terror. Hence they are changing their loyalties and the treachery is the new game of diplomacy amongst these close friends ruling in their fiefdoms. The imperialists dissected the Middle East into these tiny statelets with very little populations and massive reserves of oil and gas during the First World War and in its aftermath.

Ever since then the European and the US imperialists have plundered and subjugated these Gulf States through the dynasties that were grafted and imposed by the imperialist armies. Now, these regimes are teetering on the brink. The Arab revolt of 2011 shook these royal autocrats. The terrorist reaction that is devastating the region was fomented by these regimes in connivance of the imperialists. This policy has backfired as the rogue terrorist outfits are menacing their own royal masters. But this situation can turn into its opposite. The masses in the Arab world shall rise again. Many lessons have been learnt. The new upsurge can go the whole hog. Such a revolutionary resurgence of the youth and toilers can overthrow these reactionary vicious and obscenely rich sheikhdoms, obliterating the lines drawn by the imperialists of states divisions and unite the Arab and other peoples of the region into a voluntary socialist federation of the Middle East.