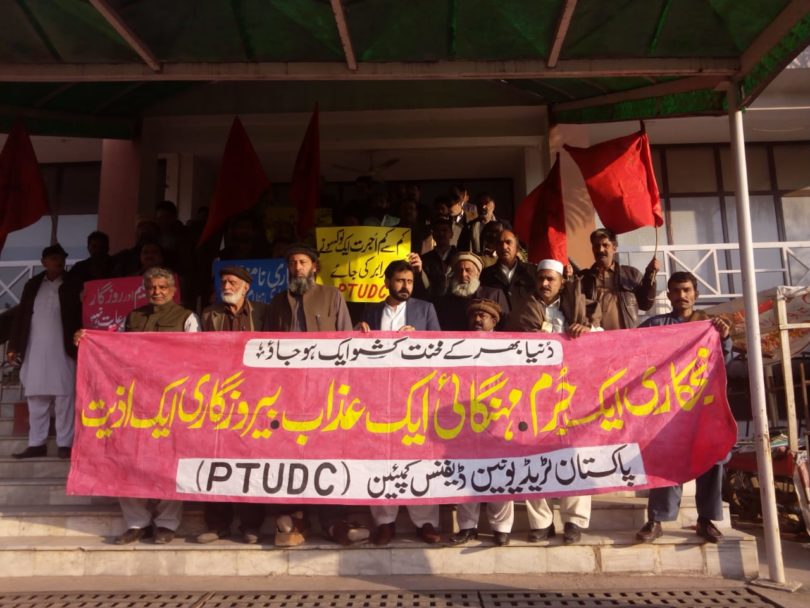 On 13th December 2018, a Labor Conference was organized by Pakistan Trade Union Defence Campaign (PTUDC) in Jinnah Hall Municipal Corporation Rawalpindi. The purpose of this conference was to unite the workers against the government’s privatization policy and to start a systematic struggle for labour rights, regularization of daily wage workers and contract employees. The program started at 11 am. The program was presided by Ghulam Mohammad Naz, leader of the Municipal Labor Union, while the special guests were Muhammad Ali Wazir, Member National Assembly, Ramadan Laghari, President of People’s Unity of PIA (CBA) Islamabad and Syed Arif Shah, Central Chairman Utility Stores Union (CBA).

Speakers condemned privatization plans of PTI government. The privatization resulted in the unemployment of the millions of workers, they said. The workers will not allow any institution to be privatized, we are all united and the successful struggle of utility store workers encouraged the labour movement across the country. Furthermore, growing inflation has worsened the lives of workers. Apart from the struggle, there is no option for the workers.

Speaking about the Labour rights, the Members of National Assembly, Ali Wazir said, “We will fight for our rights, by not only working in the workers of Pakistan but also by organizing the working class against unemployment and inflation. The government took away bread and butter from the workers, they promised the construction of 50 lac houses and creating one million jobs, but in reality, thousands of the workers have been displaced and unemployed by PTI government policies. We will organize our struggle not only in the assembly but also in the streets and squares for the defence of labour union and students union. He further stated, the support and solidarity with the affectees of FATA and other areas, due to the military operations and terrorism, are also the responsibility of trade unions. If we fight together, the success will be our destination. The People’s Unity President, Ramazan Laghari said, the PIA workers struggled against the privatization of the PIA, we have lessons to learn from that movement. The labour unions need to be organized in every institution. After the privatization of state institutions, there will be a new attack and so on. The struggle against the privatization is very crucial for every worker of Pakistan. Arif Shah, Chairman of Utility Stores Corporation Workers Union, said along with the utility stores workers’ struggle, the struggle of the PIA workers and PTUDC comrades played a decisive role in our success. If we are united and organized no power can defeat the workers. Ghulam M Naz concluded the conference. 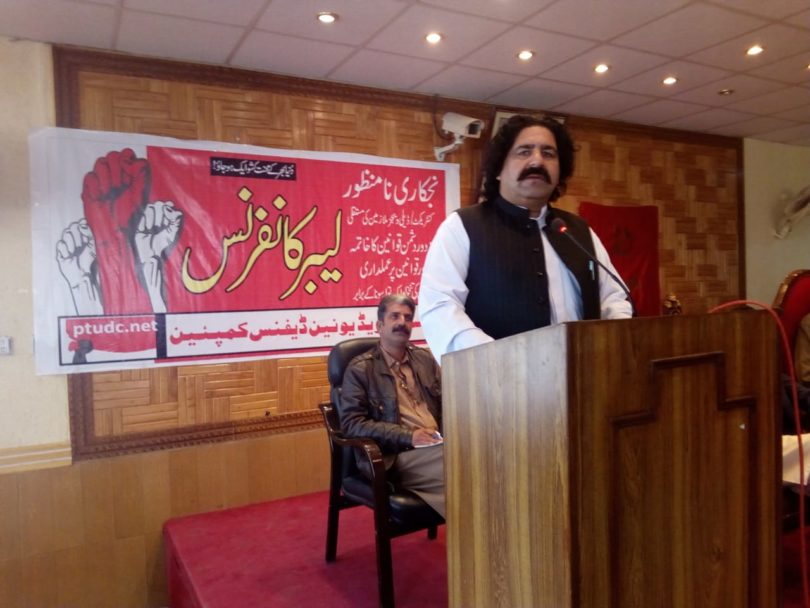 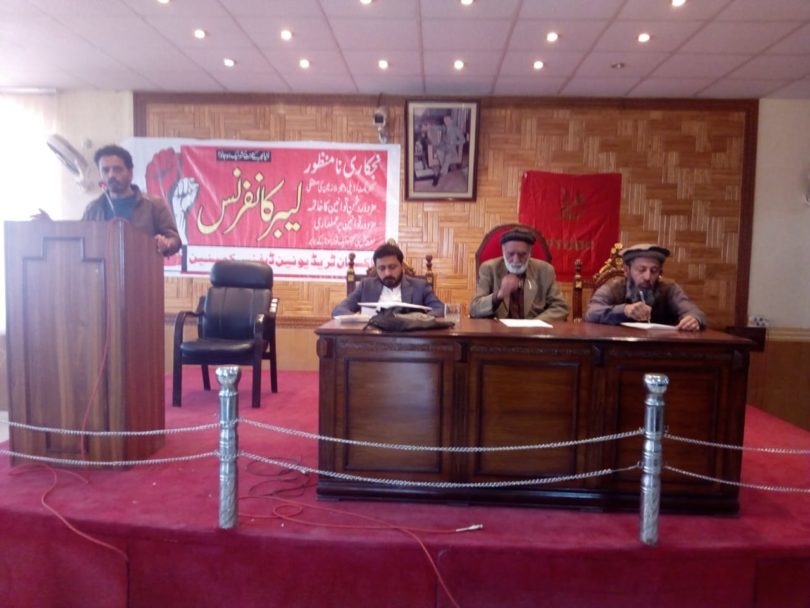 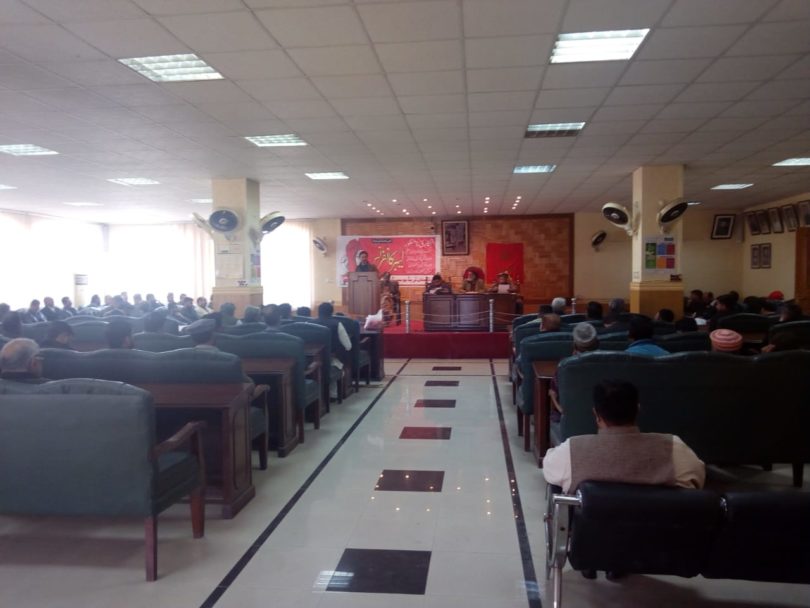 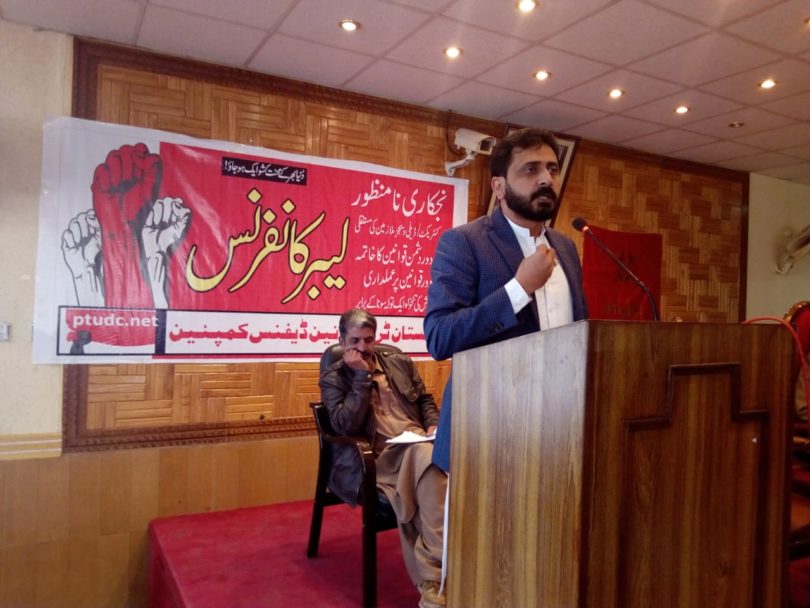 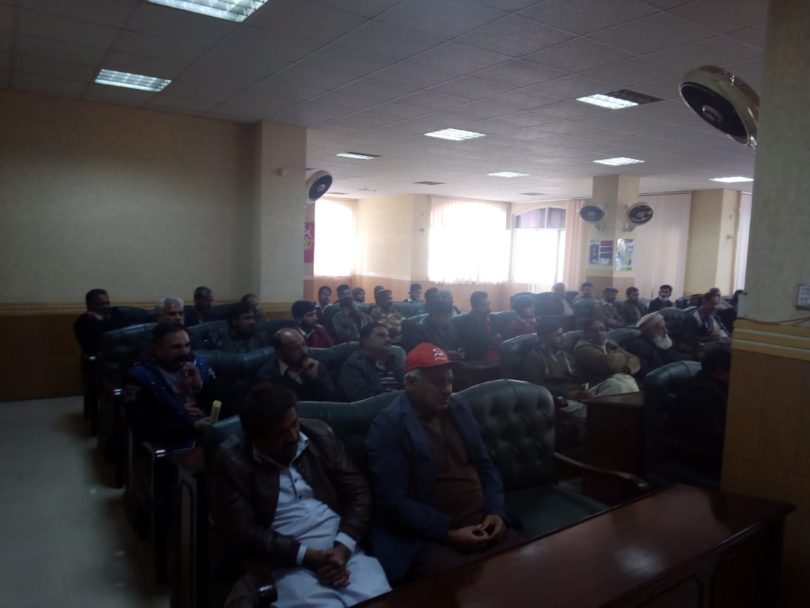 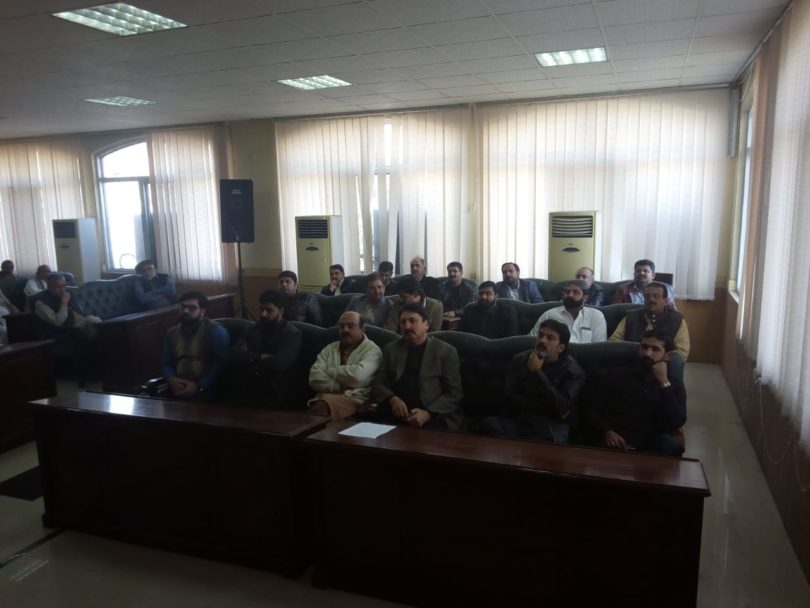 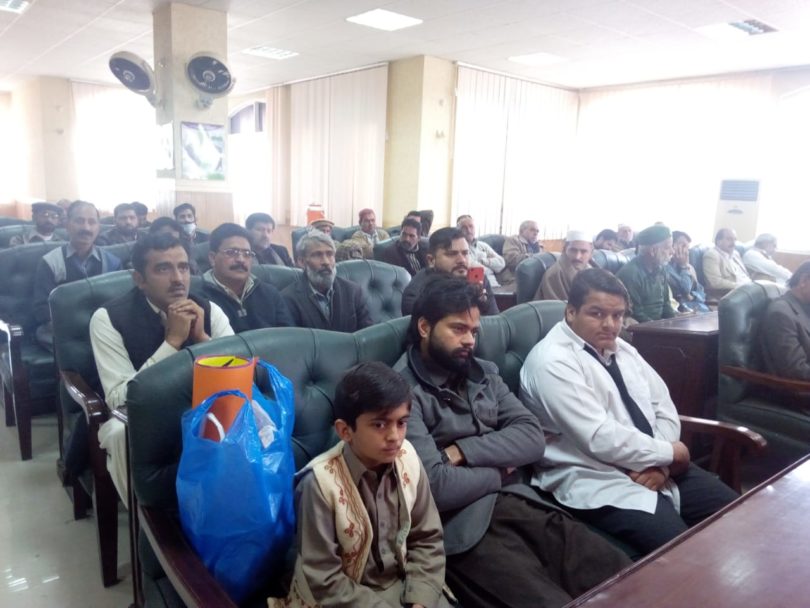 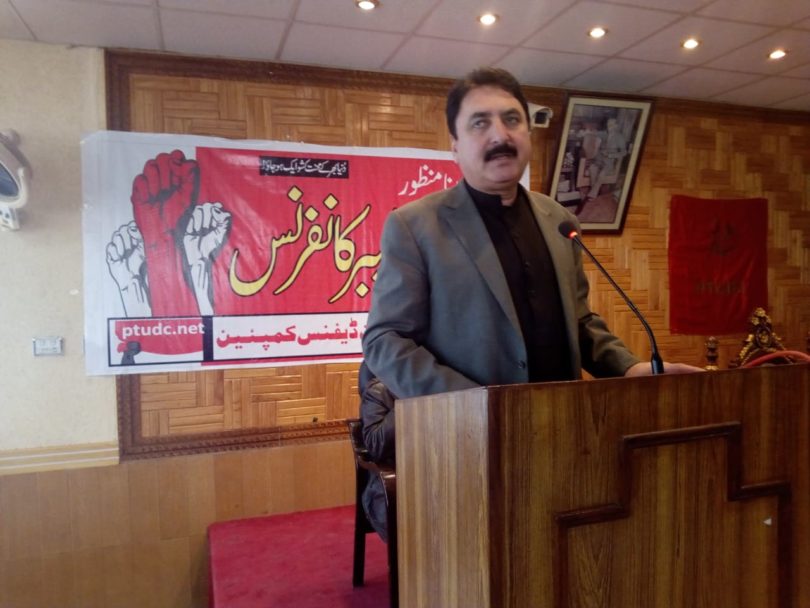 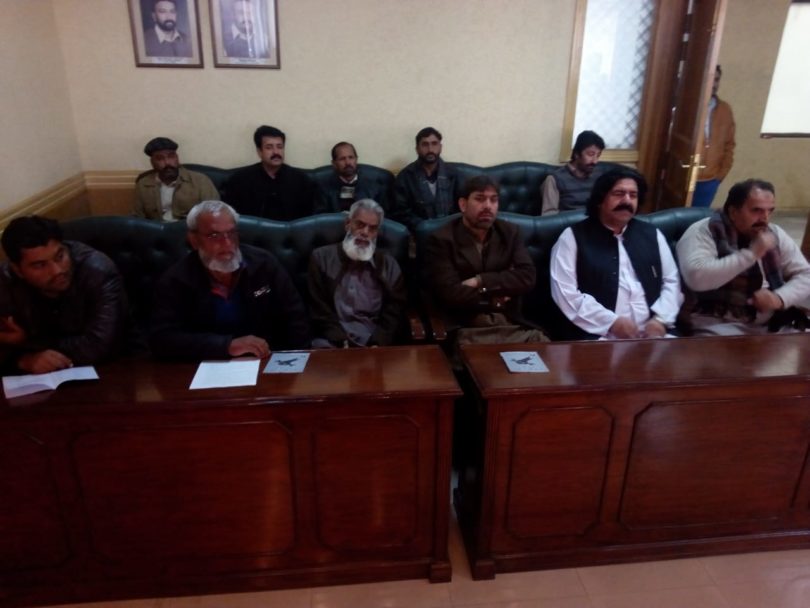 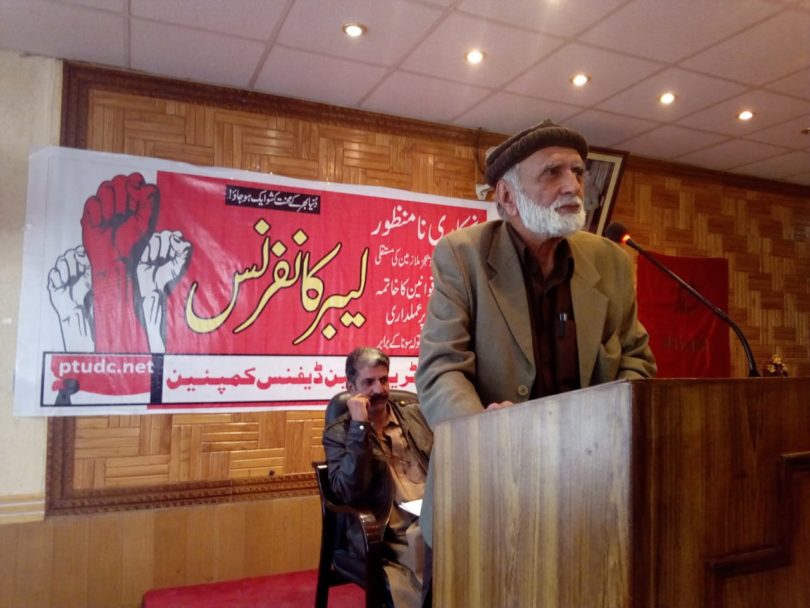 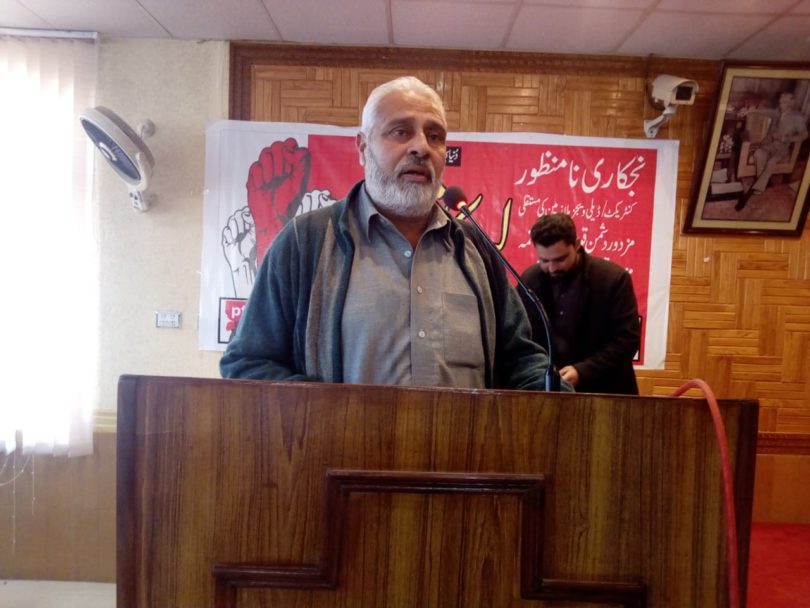 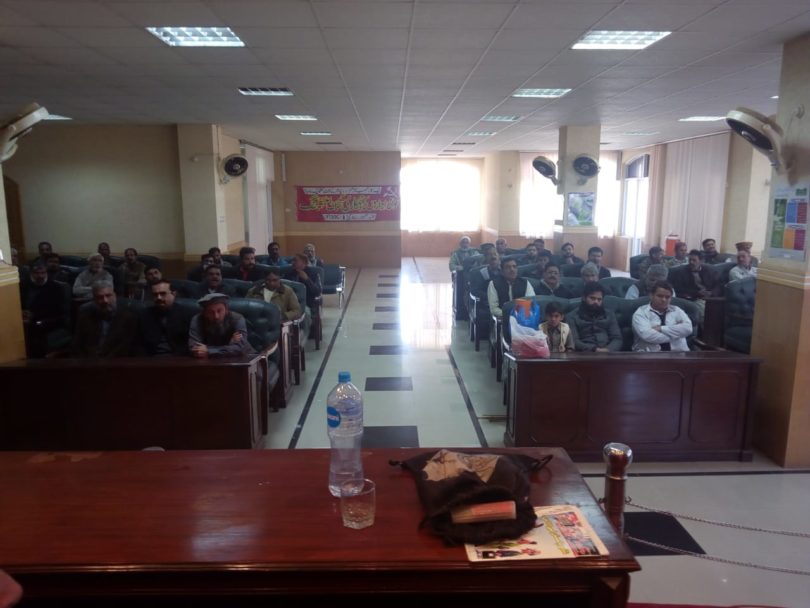 In the end, all participants unanimously approved a working committee for the joint struggle of the Trade Unions and workers. Comrade Changez of PTUDC elected as a coordinator. The next session of this committee will be in the office of the Radio Pakistan Workers Union. Finally, a resolution, comprised upon the following demands, was presented and unanimously approved by all their workers.