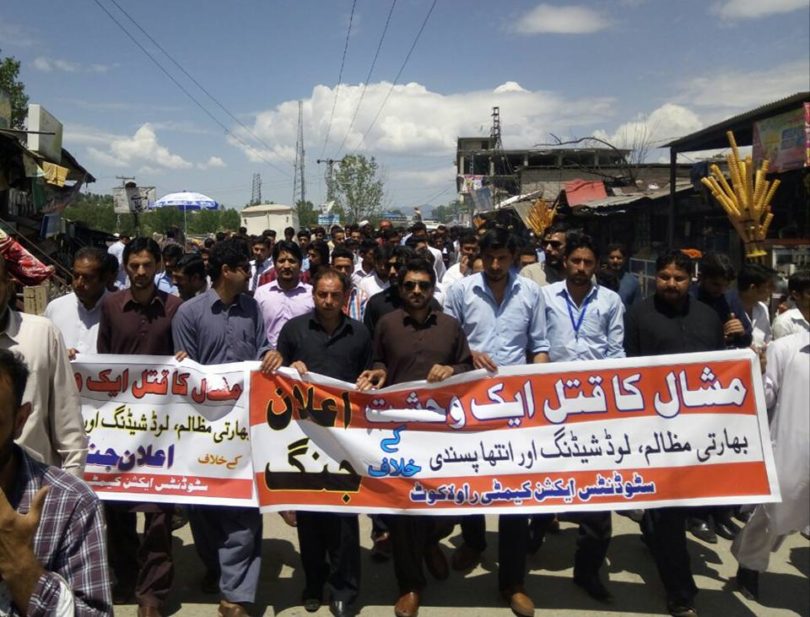 Against the Indian army repression in Indian Occupied Kashmir (IOK), Loadshedding and the brutal murder of Mashal Khan, a student of Mardan University, Students Action Committee Rawalakot organized an agitational procession and rally on 25 April, 2017 in which all the three groups of NSF, PSF, LSF, ISF and other various left-wing student organizations, as well as the Chairman of Jammu Kashmir Liberation Front, participated. 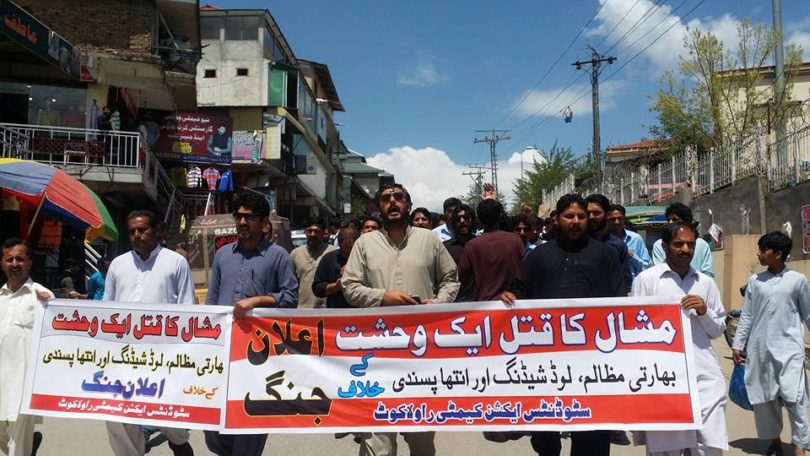 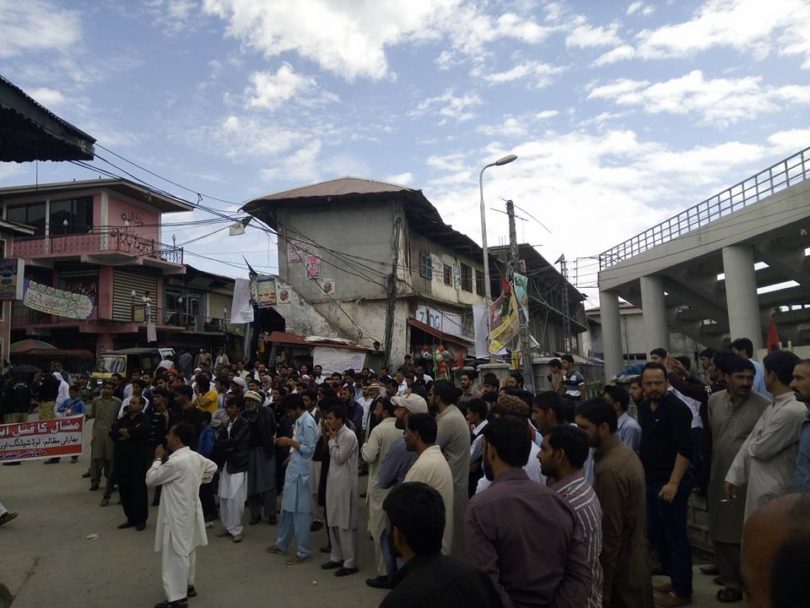 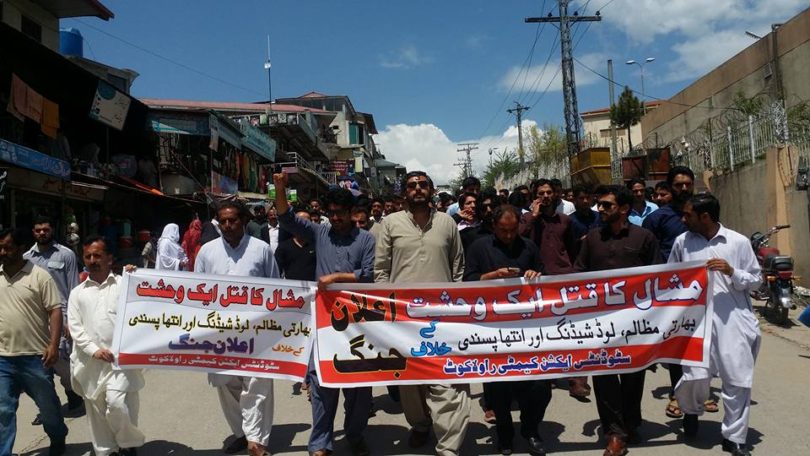 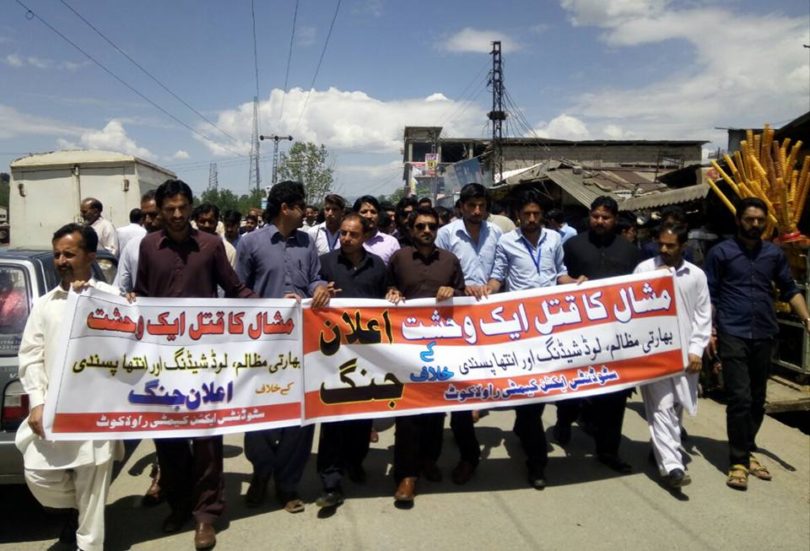 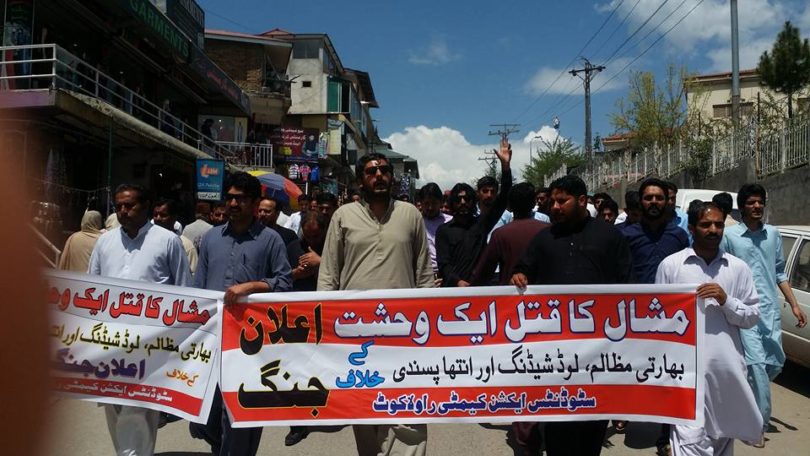 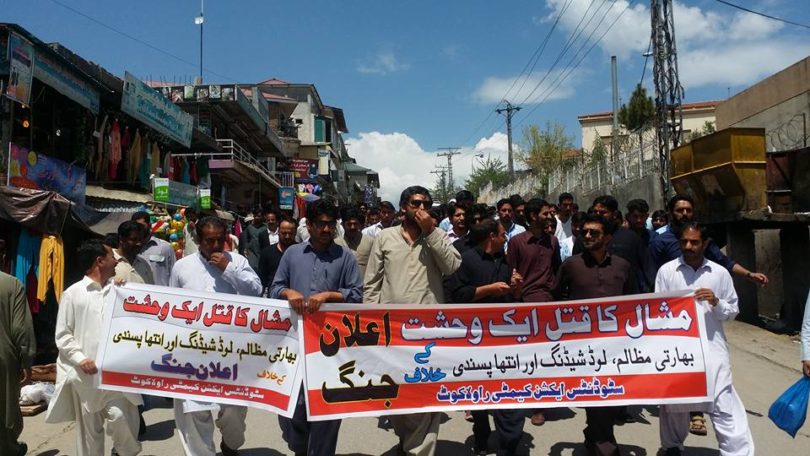 This rally had begun from College Ground and had shaped in “Great Procession”, when it reached  Kachehri Chowk. The Chairman of Liberation Front Sardar Mohammad Sagheer Khan Advocate,Central President of NSF Basharat Ali Khan, Leader Of Students National Awami Party Tauseef Khaliq, Secretary General PSF Sardar Babrak Khan, District President of NSF Rizwan Rasheed, Sardar Shahid Shareef of SLF, Sardar Haroon of NSF(Azad), College President of ISF Waqas Alfaaz, and others addressed with procession. They were saying by condemning the cruel murder of Mashal Khan, brutality on the people of Occupied Kashmir by Indian Army and unbearable load-shedding that, they shall fight this battle until they endeavor the freedom. Furthermore, they exclaimed that they would condemn the so-called Governments and their action through which they are trying to protect this rotten Capitalism in the name of Fundamentalism, Extremism, Terrorism and Liberal fascism. The protestants were chanting very furiously against this capitalist system. They said we will struggle against this system and for a peaceful, Justice based and exploitation-less society.

They said that the protectors of State did not only kill Mashal, they tried to  kill the “Light of hope”, and an “Ideology”, now it’s a revolutionary duty of every student in every institute to raise the voice for Mashal Khan, for rights of Students like Mashal did, who must not quit. They asked, The Government is working on the project of making more than 6000 watts electricity in Kashmir and also making 3000 watts electricity today, but it is not being supplied in the region which has no more than 300 Watts demand. They were ready to campaign against the Mangla dam project and as well as on other demarches.