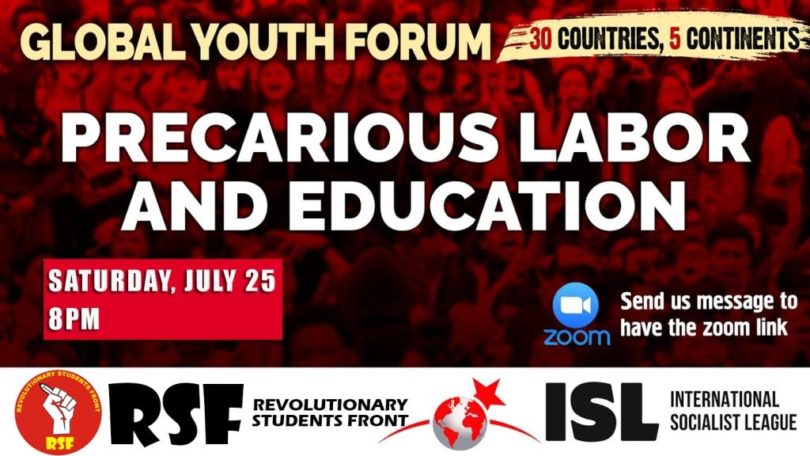 In a few days the Global Youth Forum against job insecurity and educational decline will take place. Organizations and activists representing over 30 countries and 5 continents will be joining the event, at the same time, with the common flags and slogans of the youth who rebel and organize.

The data is shocking, devastating. The numbers express the concrete meaning of capitalism in this historical cycle. The systematic, uninterrupted aggression of corporations through governments, parties, labor bureaucracies and university cliques is a feature of the system’s action against the lives of the youth. In the educational field, the figures are catastrophic:

In this general context, the response of governments and university bureaucracies has been to reinforce the super-exploitation of teachers and students through so-called telecommuting and to impose the excluding conditions of online schooling. Obviously, without investing resources in equipment, technology and connectivity for all students. Rather, inequality is amplified in the form of a “technology gap” and in many countries, the cliques that manage education prepare to try to impose online schooling as the norm, not as an exception. It is the old project of gutting the learning process, laying off teachers and making contents more precarious. Pedagogically, an absolute impoverishment. Politically and socially it’s the elitization and marginality of the poorest youth. And of course: privatization of everything that still remains public. It is the agenda of capitalism in education.

The Two Pandemics Facing the Youth

In labor, the information that we gather comes from no less than the ILO, the international organization of capital, not workers. In the document entitled “Covid-19 and the world of labor” it says things like:

Let us also add that those under the age of 30 make up 70 per cent of migratory flows internationally and suffer from the closure of borders, far from their homes. In short, the ILO’s information corroborates that for the youth, there are two pandemics, COVID and capitalism.

World Forum: A Meeting of Struggle, Consciousness and Organization

The initiative taking place next Saturday, July 25, materializes one of the resolutions taken at the ISL International Youth Conference held last month. The setting for this huge new multinational assembly of young workers and students has an impressive context. On July 1, the global strike of delivery drivers was shocking. Previously, protest actions by precarious workers of the so-called platform economy had high points in Spain and Germany, and there were even strikes at Amazon’s California headquarters. But the action by delivery workers in Brazil, and its spread to 8 or 9 other countries, marked a turning point in the movement of the young working class of this sector. With anti-capitalist slogans, against bureaucracies and multinational corporations, they made it on a world scale. At the same time, they strengthened organizational and coordination processes across borders. The student movement is also reacting. With high points in Colombia, Ecuador, Chile, Central America and soon in Paraguay, it raises the banner of the demand for a public budget to ensure permanence, against all forms of fees on the basis of imposing taxes on the rich and not paying foreign debts to the IMF and other funds. In addition, the most basic democratic demands are combined, such as the right to free student organization, Student Unions, which have been banned in Pakistan for decades, as our comrades of The Struggle explained. And everywhere, the demand is raised for governments to ensure equipment, connectivity without super-exploitation of teachers, and for everything to be democratically resolved in Crisis Committees of worker-student unity in each university, faculty or college. In summary: next Saturday the 25th July, the Global Youth Forum provides us a new opportunity to continue advancing in the coordination of all our struggles and to continue building militant organization in each country, strengthening the International Socialist League. Because precarious lives matter. Because we raise our agenda and conscious rebellion against capitalism.

To participate in the Global Forum you must register by writing to the Facebook pages of International Socialist League and Asian Marxist Review.

These are the event’s times worldwide: