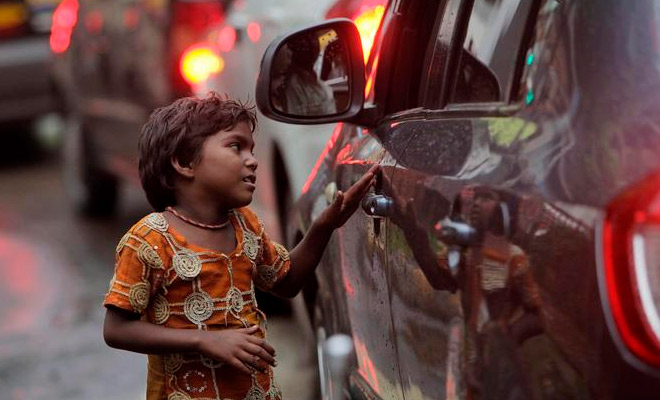 India is being hyped as being very modern. Yet, in the midst of the towering buildings and corporate plazas, there are huge swathes of ghettos breeding with intense poverty and misery where human beings are forced to live in animal conditions with unhygienic and filthy dwellings. The artificial glitter and facade of modernity fails to conceal the primitive social and economic conditions that prevail across India. These conditions are reflected in politics and the elections that are being held in nine phases from April 7 to 12 of May this year. The drums of victory of a party based on the most ancient ideological foundations, the Bharatiya Janata Party (BJP) is feverishly being beaten by the corporate media. This reactionary party and its chauvinist mascot, Narindera Modi, are supposed to complete the modernisation of India. Such a dialectical contradiction could not have been more ironic. Yet the majority of the electorate does not really have any hope in these elections and the democratic process itself. There is a palpable revulsion towards the system as a whole. In an opinion poll released this week by the Pew Research Centre, more than 70 percent are dissatisfied with India’s prospects and more than 80 percent are bitterly gloomy about economic matters. Bruce Stokes of the Pew concludes, “Everything is a problem for the Indian voter”. Where the Indian masses have no optimism about the future of India under the rule of capitalism, the billionaires of India, who now outnumber those of Japan, are desperate to get this religious bigot Modi into the prime ministerial slot. In another opinion poll conducted by the Pew Centre, 74 out of the 100 richest Indian corporate bosses have jumped on the Modi bandwagon.

The mass rush of the elite for Modi is for no other reason than the desire to see Modi replicate anti-people and pro-capitalist policies with more concessions to the business class and reduction in state subsidies and deregulation of labour laws undermining hard won rights of the Indian proletariat. National chauvinism, including Pakistan bashing, will provide fuel to Hindu fundamentalist frenzy. After the November 2008 attack and carnage in Bombay by Pakistani based terrorists, Modi mocked the Congress as weak before Pakistani terrorists. In a television interview he hissed, “I would do with them what I did in Gujarat”. In a recent article in The Guardian Aditya Chakrabortty wrote about Modi’s venal attitude against the Muslims, “Modi bears a responsibility for some of the worst religious violence ever seen in independent India but there’s nothing like looking a winner to attract apologists…Modi said a couple of years ago that he felt the same pain over the bloodshed (in Gujarat in 2002) as a passenger in a car that has just run over a puppy. He referred to the refugee camps set up to shelter some 200,000 Muslims who lost their homes as ‘baby-making factories’”.

The mantra of Gujarat’s economic model of growth has been assiduously touted as the feather in the cap of Modi’s success story in the corporate media. India is being prepared for the same medicine. However, the reality of this high growth has been stark and painful for the masses. It is true that corporate capitalists in Gujarat have amassed huge profits while the toiling masses have suffered at the hands of this high growth rate. According to official figures, there has been no improvement in health, infant mortality, education and workers’ wages. Modi’s aggressive neoliberal policies have increased the burdens on the workers and the poor. In 2006, there were more undernourished children in Gujarat than in 1993. According to the comptroller and auditor general, “His (Modi’s) administration has sold off public land dirt cheap to industrialists, provided companies with energy at below-market prices and given them loans at an interest rate of 0.1 percent. They in return have provided him with sponsorship and rides on their private jets.” Atul Sood of the Jawaharlal Nehru University in Delhi writes, “The governance model of Gujarat is all about aggressive implementation of development on behalf of the big private investor. It is a model that works for the rich and against the poor.”

The performance of the Congress has been dismal and awesome. During its rule corruption has sky rocketed alongside price hike, unemployment and sharp rise in poverty in spite of the high growth rates. However, like all the BRICS or the so-called emerging economies, growth rates have lost steam and the fragile nature of these uneven capitalist economies stands exposed. The regional parties use all varieties of nationalist, ethnic, caste and racial prejudices to gain votes and power for their shares in pilferage and plunder. The unleashing of free market economics by Manmohan Singh in the early 1990s provided impetus to the communist parties culminating in their highest ever seats in the elections of 2004. Unfortunately, this was squandered with an opportunistic coalition at the centre, opening their states to corporate capitalism and alienating their mass support base. This led to a disastrous election result for the Communist parties in the 2009 elections. They have learned no lessons from this and today they have abandoned revolutionary politics for a dismal parliamentarian cretinism and hollow secularism.

The Aam Aadami Party is no substitute for the woes of the Indian masses. It also advocates the same policies as the Congress and the BJP albeit with different colourations. However, as Indian capitalism continues its decline, the conditions of its people deteriorates. According to official figures out of a population of 1.2 billion, 810 million are food stressed. The arch mouthpiece of the world of capitalism itself, The Economist, is pessimistic about the prospects of Indian capitalism, “The country is teeming with problems. The growth has fallen by half, too low to provide work to the millions of young Indians joining the job market each year. Reforms go undone, roads and electricity remain unavailable, and children are left uneducated…The business of politics, Indians conclude, is corruption.”

This is a slap on the face of the Indian ruling class. Not only have they failed to accomplish the tasks of the national democratic or the industrial revolution but their reactionary nature is exposed by their espousing for the Hindu fundamentalists to install a repressive regime to squeeze their profits from the blood and tears of the Indian workers. This historical failure of the bourgeois lays bare the doomed nature of Indian capitalism. In a remorseless chorus of the cliché, “biggest democracy in the world”, they try to conceal the fact that India has also the largest concentration of poverty and deprivation in the world. This misery and suffering is not the destiny of India’s working classes. They have magnificent traditions of struggles and mass revolts. They cannot be kept in the chains of capitalist coercion in the name of democracy and nationalism for long.