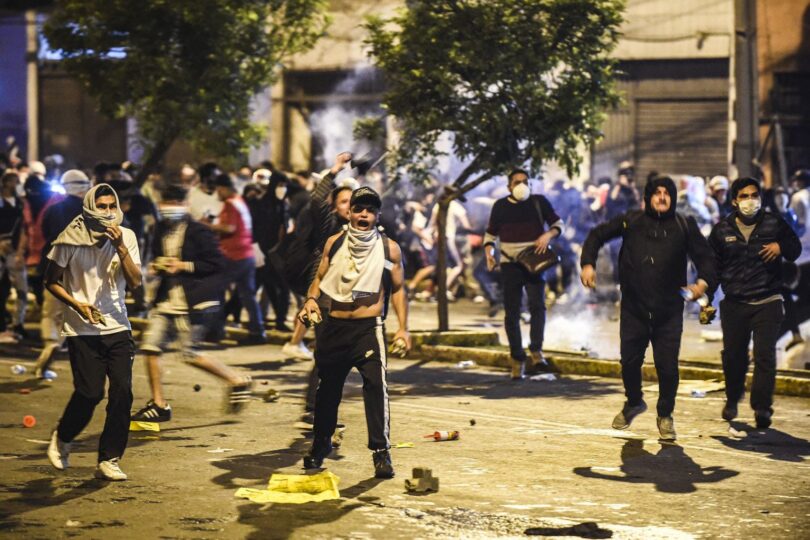 To understand the key elements of the powerful popular uprising that is sweeping the country and has caused an unprecedented crisis in the Peruvian political and institutional regime, we must begin by understanding that the country is undergoing an immense revolutionary process. It must be said clearly that it is not simply a crisis, but rather the breakdown of a political order whose decline has been persistent until it reached the lumpenization of the political caste, a constitutional breakdown and, finally, the power vacuum in which we find ourselves today, Monday, November 16.

The succession of vacated (dismissed) presidents, other imprisoned or who committed suicide (Alan García), the accusations of corruption that held against more than fifty percent of Congress representatives, and the uncertainty that we are experiencing in these hours, are results of this dmise, accelerated to unsustainable levels after the 2016 elections won by Pablo Kuchinsky, who was subsequently dismissed.

Martín Vizcarra, an engineer, former governor of Moquegua, Kuchinsky’s successor and lobbyist for international mining companies established in the south of the country, was dismissed last week by a mafia alliance forged in Congress with the complicity of media oligopolies and business power, which has had the consent of the institutions, whose silence allowed, in practice, the use of legal resources and institutional means to carry out a palace coup in the midst of an atrocious economic and social crisis unleashed by the pandemic of COVID-19.

His successor Merino only lasted 5 days in power. He was devastated by a popular mobilization that confronted fierce repression that caused at least two young lives and the disappearance of about a hundred protesters.

The political order instituted in 2000, sustained by interest groups participating in the National Agreement – who were no longer representative of the popular demands that mobilized during years against the Fujimori regime – left the 1993 Constitution, the neoliberal economic model, the technocracy that imposed the economic and legal reforms that have consolidated the privatization of the State in recent years, the electoral system and the collapsed party system that has given fruit to a free market of electoral undertakings, and the mafia networks entrenched in various state institutions all intact.

For years, the elections have been pantomimes of democracy: without real parties, with no real possibility of alternation, and with processes that are less and less competitive and more opaque, which favored the mafias with greater capacity to pay for influence. Four – and perhaps five – presidents of the Republic with very serious accusations of corruption, who always governed along the same lines despite the change in the electoral image are very clear evidence of this. They all focused on blatantly negotiating private interests of all kinds.

This week, which will be marked in history, as if out of nowhere, angry crowds emerged across the entire country and declared themselves in insurgency, disposed to risk everything. The protests have been led by brave young people grouped in spontaneous and also pre-existing collectives. In a few days, and in the midst of the pandemic, they managed to multiply the expressions of rejection of Manuel Merinou’s usurper government, but also the rejection of the dismissed Vizcarra. They even managed to add those who had observed with distrust the first street protests, the cacerolazos called at 8 o’clock every night, the projections of images once the curfew forced them to leave the streets, or the hashtags and memes that inundated the online public sphere. The politicized social tide emerged uncontrollably. The strength of this expression of popular sovereignty resides, for now, in its ability to unite all who desire to rescue the country from the clutches of the mafias. However, we also know that to re-found the country we will need more than enthusiasm, outrage and spontaneity.

Re-founding the country is the essential goal that we must set ourselves. Is it possible? Yes, and precisely because we are witnessing the breakdown of the political order. The constitutional crisis in which we find ourselves forces us to project into the future, not into the past, and to agree on solutions that prevent, now, that the mafias and corporate interests mark the course and destiny of the country. There is no place in this situation to promote cosmetic changes and minimal reforms that leave institutional structures intact, hence the absolute crisis of progressives, who in expressions such as the Broad Front or Verónica Mendoza’s New Peru, do nothing more than represent the “progressive” leg of a collapsed regime and desperately offer alternatives that do not trespass the margins imposed by bourgeois institutions. No. The electoral undertakings that march to the beat of Congress should not lead this process. Nor should corporate interests that use the media as their oligopoly’s megaphone and impose their will on the State. Who then? How? Towards where? The idea of ​​a free and sovereign Constituent Assembly process in Peru is much more than a slogan of the Peruvian left. Today it is the task of the moment, an immediate task. It is a process that has to be driven from the bottom up, not from the top down. It has to open true deliberative and reflective spaces in society and, although there can and should be proposals of various kinds, these have to be debated, weighed, reconsidered, eventually articulated and finally expressed in a formal process that generates solid agreements of those that the workers and the mobilized people must appropriate.

The conditions are in place to promote this call now that the Fujimorist constitutional political order instituted in 1993 has been broken. The formal conditions exist, but above all, the social conditions exist. In recent days we have seen the emergence in politicized society, among young people and workers, the demand to redraw the rules of the game, to even change the roots and re-found the country. And with whom? If there are no parties, with whom? There are no parties, it is true, but that does not mean that in Peru there is no organization or capacity to organize. In Peru, there is a huge number of social and popular organizations that, for decades, have already articulated forms of diverse incursion into politics as mechanisms of resistance and struggle with the State that excludes or crushes them. Organizations of indigenous peoples are perhaps the most emblematic in this field. Youth groups of all kinds are in the front row of the uprising. And there are also, though to a lesser extent, various types of unions that for decades have been fighting against the violation of rights, despite the betrayals of the union leaderships. There are even civil society organizations – universities, NGOs, non-profit associations – that could and should be conscientiously involved in a process like this. Especially and as part of a generalized process the feminist groups that, for a long time, have promoted not only the struggle for the recognition of fundamental rights, but also initiatives that transform society. Hence, the need for revolutionaries to propose ourselves as the amalgamation of the immense number of processes dispersed today is essential.

It is essential to place debate and the energy of the social process at the center of the action that thinks, deliberates, articulates, changes and reinstitutes the political and economic structures that organize our society, to begin to turn everything around, so that for once those who never governed, the workers and the people, can govern. From the International Socialist League, we call for the unity of revolutionaries behind these objectives to avoid being, once again, the coattail of reformist projects that only seek to disguise a corrupt system that condemns the vast majority of Peruvians to hunger. Revolutionary socialists must clearly establish ourselves as an alternative and propose a fundamental solution, the only alternative for Peru and for Latin America, is a Socialist Peru.

That would mean betting on a different future.