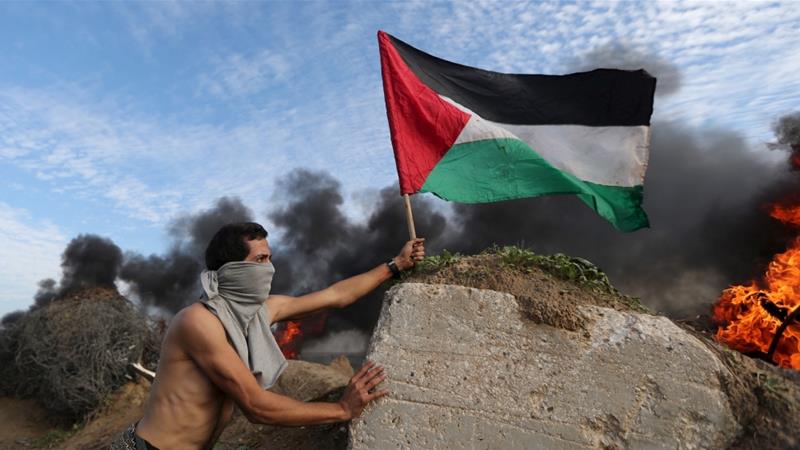 The carnage in Syria, collapse of the states in Yemen, Libya and Iraq and the mayhem ravaging the Middle East, the Palestinian issue has been pushed into oblivion. The belligerent acts and statements of the theocratic Iranian clergy and the despotic Gulf monarchies, the repression in Egypt and other ravaging conflicts have been in the media headlines. The western imperialists have maliciously depraved the Palestinians from being victims of relentless brutalities by the Zionists into perpetrators of violence. With Trump’s ascendency to power in the US, the imperialist belligerence against the Palestinians has been denuded and their malice sinister.

The UNO and the so-called world community have bared their impotency, uselessness, deception and imperialist servitude against the onslaught of vicious oppression and the besieging of Gaza. The Chinese, Russians and other big powers are mainly interested in their own financial and strategic interests. The role of the Arab rulers and those of the so-called Islamic countries has been of deceit and exploitation of the Palestinians’ plight for domestic consumption.

Seventy years ago Imperialists and corporate media blamed the Palestinians for their own exodus. The veteran British journalist Robert Fisk mocked the western governments in The Independent;

“Monstrous. Frightful. Wicked. It’s strange how the words just run out in the Middle East today. Sixty Palestinians dead. In one day. Two thousand and four hundred wounded, more than half by live fire. In one day. The figures are an outrage, a turning away from morality, a disgrace for any army to create…and we are supposed to believe that the Israeli army is one of “purity of arms”? Israel’s bleak excuses – and America’s crude response – raise this very question. If we can now accept a massacre on this scale, how far can our immune system go in the days and weeks and months to come? The victims are themselves the culprits. This is exactly what the Palestinians have had to endure for 70 years…CNN called the Israeli killings a ‘crackdown’.”

The most appalling event in May was the simultaneous bloodbath in Gaza and opening of the new US embassy in Jerusalem. In The New York Times, Michelle Goldberg wrote;

“… (It was) grotesque… a consummation of the cynical alliance between hawkish Jews and Zionist evangelicals who believe that the return of Jews to Israel will usher in the apocalypse and the return of Christ, after which Jews who don’t convert will burn forever… as long as Trump is president it may be that Israel can kill Palestinians, demolish their homes and appropriate their land with impunity”.

In the ceremony at the embassy, Robert Jeffress, a Dallas evangelist pastor who gave the opening prayer at the embassy ceremony had once claimed, “Religions like Mormonism, Islam, Judaism, Hinduism lead people to an eternity of separation from God in hell.” But Fisk defies the widespread pessimism about the future of Palestinian struggle;

“Israel’s greatest fear (is that) because there are millions of Palestinians who claim their right – under UN resolutions – and who might turn up in their tens of thousands at the border fence in Gaza next time. How many snipers will Israel need then? And, of course, there are the pitiful ironies…they can still see their (ancestral) lands. And when you can see your land, you want to go home.”

The negotiations have been a virtual trap to derail and break the momentum of the Palestinian intifadas, which were seriously striking at the raw nerves in the power edifices of the Zionist state. The negotiations were used to bide time for by the Israelis to consolidate their occupation. The colonization of the West Bank was aimed to create a de facto annexation of a major part of this territory, leaving the populated areas under the control of the Palestinian Authority, which in reality plays the role of a “police by proxy”.

Now the Sisi dictatorship in Egypt has been mediating talks between rival Palestinian factions and also with the Israelis. In August the Egyptian intelligence acted as a broker between the Gaza-based Hamas movement and Israel in indirect talks. ‘Palestinian Authority’ President Mahmoud Abbas was infuriated that his regime was left out in the Hamas-Israel talks. But the ruling elites of all parties in this conflict seek negotiations from fear of the seething discontent flaring up into another Intifada. Mass protests took place in the past several months against a decade-old Israeli sea and air blockade in Gaza. More than 2000 Gazans were slaughtered.

On the other hand Egypt, Saudi Arabia, Bahrain, Jordan, the UAE and other Arab regimes are in a cosy relationship with Israel, mainly on the basis of their common enmity with Iran and subservience to US imperialism. That means they have practically abandoned the Palestinian masses to this harrowing fate of misery, destitution, unemployment and brutal occupation by the Zionist state. Today Gaza is the largest open-air prison on the planet.

In the present world situation, the Palestinian workers and the masses have no real friends in any regime in the Middle East or elsewhere. Their rulers in the Al Fatah or Hamas have interests of power and privileges to cater for. They moan and groan only to gain cash and benefits from regional regimes. The only real friends and supporters of the oppressed Palestinians are those from the toiling classes and exploited peoples in the region and beyond. Their demands, hardships exploitation and oppression are one and the same. The 2011 Arab revolt graphically illustrated the formidable power of the ordinary people when they rise in revolt.

During the ‘The Great March of Return” that culminated on May 15th, a Gazan poet innovated a new slogan, “Our hardships induced this scream for life. The March of Return is a scream for life so that we may leave the walls of our prison.” Another Palestinian intifada is a real possibility. When it erupts it can trigger a new Arab revolutionary upsurge across the region. This movement treading the path of class struggle can break the chains of subjugation and overthrow Israel’s Zionist citadel along with the reactionary states and systems that have pulverised the oppressed classes for generations.