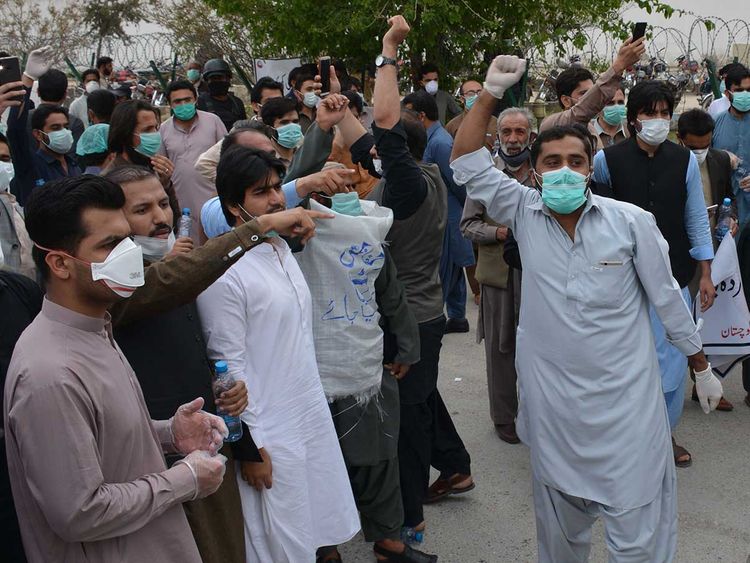 Since the outbreak of COVID-19 pandemic, saviours of capital are mugging against preparedness to coup with this outbreak. So-called populist regimes are busy in downplaying the seriousness of the COVID-19. We have seen this “pandemic denial” phenomena from the United States to China. Instead of minimizing the global health crisis, ruling classes wasted time mitigating their inability to safe millions of lives. Even China tried to suppress information about the virus when it first emerged, helped it spread around the world. Mexican President Andrés Manuel López Obrador encouraged his people to eat out at restaurants, Donald Trump insisted American workers to start going back to work and Brazilian President Jair Bolsonaro literally called coronavirus as “a little cold.” Pakistan ruling class is not an exception in all this.

After the outbreak, Prime Minister Imran Khan categorically denied the gravity of the crisis and even advocated against lockdowns and announced the lifting of the countrywide lockdown in certain “phases” started from 9th May. Now Supreme Court of Pakistan (SC) has joined this bandwagon by declaring COVID 19, “apparently is not a pandemic in Pakistan, is swallowing so huge money.” SC allowed all traders especially big shopping malls to remain open all the days. The written judgement put the last nail into coffins of any pandemic preventive measures. It will not be surprising if the religious group were granted permission to hold religious mass gatherings.

As these lines are being written, Pakistan has reported 44,672 confirmed the Corona patients with 993 deaths. Within a week, daily confirmed cases average has suppressed 2,000 and daily testing average at around 10,000. According to NDMA, total 400,292 Corona tests have been conducted so far. The testing to total population ratio is still very low, there are some reports which seriously allege Government for the deliberate reduction in tests. Dr Niaz Murtaza in his piece published Daily DAWN cites some estimate damage reports of contagion, he wrote “An Imperial College study says lockdown would save 200,000 to 300,000 Pakistani lives. A Yale study says lockdowns will save 182,000. Even this lower toll surpasses the combined deaths from our three recent mega-crisis: terrorism, 2005 quakes and 2010 floods.” Even dissenting voices are emerging from within Federal Cabinet on the anticipated increase in contagion. Although lockdowns are not the ultimate solution to coup with COVID-19, however as seen in past these allow to limit the spread of contagion and reduce stress on trembling health care system – also it provides time to research for a cure.

Despite different reports and medical professionals’ warnings, Govt is trying to restore normality and wants businesses to operate as usual. Marx and Engels had already explained the role of State, they viewed the capitalist state as a creature of the bourgeois economic interest. This idea was expounded in The Communist Manifesto, ‘The executive of the modern state is nothing but a committee for managing the common affairs of the whole bourgeoisie.’ The cruelty of capitalism was never as clear as this pandemic has torn apart its barbaric nature. The death agony of capitalism is crystal clear from advanced capitalist countries to the so-called third-world countries. The ensuing pandemic tragedy should have been preventable as epidemiologists have been predicting the pandemic like this as certainty yet the ruling classes ignored and instead of strengthening public health systems, they opted to manufacture weapons of mass destruction. These multi-billion dollar death toys are nothing in front of the pandemic, yet the world continues to pile up these stocks. Owing to restrictions under lockdowns the world economy suffered a shock. As IMF’s Managing Director Kristalina Georgieva hinted to revise its forecast for a 3 per cent contraction in GDP in 2020 downward further. However pandemic exposed wrecked system which gives preference to profit rather lives.

The organic composition of Capital always strives to earn more profits and increase profitability. As Marx explained in his masterpiece Das Capital, “Capital is dead labor, which, vampire-like, lives only by sucking living labor, and lives the more, the more labor it sucks.” In a letter to Kugelmann, he further asserted,

“Every child knows a nation which ceased to work, I will not say for a year, but even for a few weeks, would perish. Every child knows, too, that the masses of products corresponding to the different needs required different and quantitatively determined masses of the total labor of society. That this necessity of the distribution of social labor in definite proportions cannot possibly be done away with by a particular form of social production but can only change the mode of its appearance, is self-evident.”

Like everywhere, in Pakistan also capitalists have put all burden of the crisis on workers and peasants. Massive layoffs are happening, more rigid restrictions on unions, wage cuts and most important unwritten suspension of labour laws. Workers are merely reduced to just raw material of exploitation. The labour rights, won by workers after many years’ struggle, have been brutally snatched from them. They cannot even raise their voices. Response from the state is like an insult to already scorching injuries of the working class. In the name of protecting people, State resorted massive bailout packages for big businesses and industry. The current chorus of “protecting daily wage worker” from the Pakistani ruling elite is about how to keep stimulating the economy with bailout packages. Their real purpose is to prop up markets, not to help people. While financial assistance for the unemployed is necessary, bailing out the big businesses is hard to justify. The Pakistani government has budgeted around Corona relief package worth 900 billion rupees ($5.66 billion) and only $1.25 billion reserved for low-income groups. For years, many businesses have used their profits and borrowed more to invest in stock markets and real estate and now helping them is a grave injustice. Despite all pandemic challenges, as per financial reports, Pakistani banking sector continue to report profits and big names like Pakistan Oilfields Limited reported a 61 per cent, Pakistan’s Gharibwal Cement has announced a 10.9 per cent, Nishat Chunian’s net profits surge by 30.5 per cent.

Despite the bailout packages massive layoffs are continuing and unemployment is spiralling. For the majority of the population, now its question of survival as they are not able to afford food. Core Inflation is soaring continuously. The export markets of Pakistan are already in severe crisis. And to ensure the profitability, the businesses will have to minimize their operational costs, that results in the reduction of staff and consequently more unemployment. This is clear that the economy will not be the same like before COVID-19. Nevertheless, the pandemic has historically exposed belatedness and ineptitude Pakistani crony capitalism. Instead of strengthening the economic foundations of the country, the ruling class always look towards imperialist financial support in one way or other. The current regime has taken the curse of charity to a whole new level. Humanity is being perished and the working class is suffering the most. Even before the pandemic the ruling elite was imposing IMF dictated brutal neoliberal economic measures, now it vowed to carry the draconian privatization policy in more brutal ways.

As we are witnessing more attacks unleashed on the working class but grief and anguish of workers are reaching its boiling point. The state has nothing to provide them. Bosses are not even paying workers’ due salaries and contracted the annual bonuses. Along with these factors, widespread income disparity and chronic poverty infused radicalization among advance layers of the working class. We have seen massive agitation for personal protective equipments (PPEs) and increase in health budget from health professionals. Now with the opening of businesses, other workers are also putting similar demands. Railway drivers refused to run trains without PPEs and WAPDA electricity workers already put forward similar demands. The export industries and industrial hubs of Pakistan are turning into protest arenas. Workers of these industries are protesting for their unpaid wages and resorting to take streets during the pandemic. On 19th May over 5,000 workers went on strike at US apparel factory at Gajjumatta, Lahore. Similarly, hundreds of workers went on strike at Denim textile in Korangi industrial area, Karachi. The reason was a delay in wages and refusal of factory owners to give bonuses to workers before Eid. Instead of negotiating with the workers, the police in both cities brought to crush the protests. In Karachi, they even opened fires upon workers, injuring one worker so far. Aside from the provision of PPEs, the workers are being forced to work without wages. This exposes the cruelty and true nature of Pakistani parasite capitalists. Along with the industrialists, the state is brutally crushing the protests, even lodging FIRs against workers’ leaders for inciting the violence and breaking social distancing SOPs.

This is the exposure of a decayed capitalist system which cannot give any concession. Workers are being suppressed and marginalized without any health or financial security. All trade unions and workers through a united front must organize and fight against the real virus – The Capital. There must be an immediate stoppage to all non-essential work until the pandemic over. As the ruling class will not voluntarily provide us with relief, we have to fight for it. As we have seen during the Spanish Flu outbreak, US President Wilson tried to continue war efforts in Europe but it was defeated only by workers’ efforts especially of shipyard workers. 1918-19 saw massive strikes in the US, Europe and it transformed the whole public health system. We need to learn from history and act accordingly.

Our slogan should be, “No Work Until Its Safe!”

We should assert the following demands, again and again;