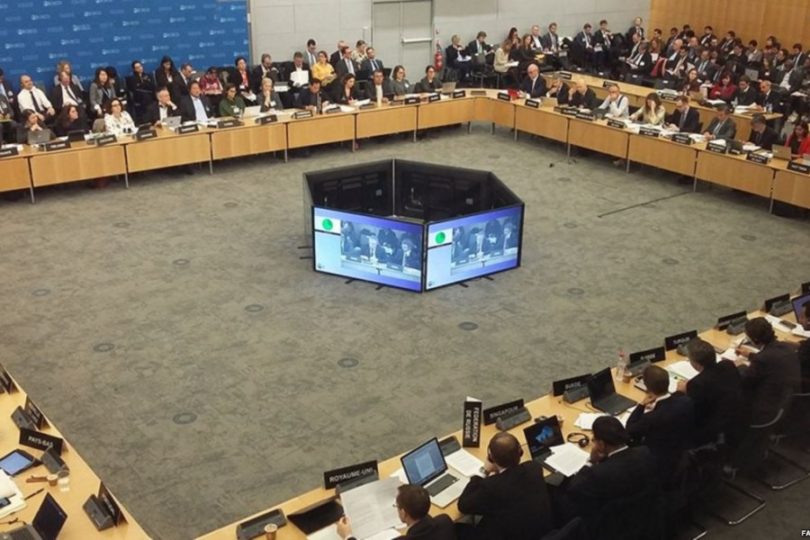 Last Friday the global money-laundering watchdog, Financial Action Task Force (FATF) decided to put Pakistan on its terrorist financing watch list. The placement will come into effect from June this year. This move could seriously jeopardise Pakistan’s already crisis-ridden capitalist economy. The 35-member body works by consensus and even China and Saudi Arabia, Pakistan’s closest allies withdrew their objections after intense pressure from the US. The move is part of a broader US strategy to pressurise Pakistan to cut its links with terror groups in Afghanistan.

Being placed on the FATF watch list brings extra scrutiny from regulators and financial institutions that will be wary of doing business with Pakistani banks. The government in Islamabad has been scrambling in recent weeks to avoid being added to this list. The US motion, to have Pakistan added to the “grey list” of countries was backed by Britain, France and Germany. Washington has been threatening to get tough with Islamabad over its alleged ties with Islamist Jihadists, and last month President Donald Trump’s administration suspended aid worth about $2 billion.

Pakistan’s decadent and reactionary ruling class and its crisis-ridden state has increasingly been relying on religious extremism to perpetuate their rule. Although the Pakistani deep state’s spooks have been complicit in such covert operations, the Americans have never been naïve spectators either. After World War II, as the US asserted its role as a world policeman, Islamic fundamentalism has been used as a tool in crushing revolutionary movements in majority Muslim countries. US Secretary of State John Foster Dulles, under President Eisenhower, was the architect of modern Islamic fundamentalism in the aftermath of Egypt’s victory under Jamal Abdul Nasir in the Suez War of 1956.

Ever since then, successive US regimes have been fostering religious fundamentalists all over the Muslim world, from Afghanistan to the Middle East. But with American administration’s betrayals and the higher funding offers from other world and regional imperialist states some of these US nurtured terrorist outlets and their religious warlords have been switching sides and often turn out to be Frankenstein monsters for their US and Pakistani mentors. The imperialists also failed to handle their installed puppets in Afghanistan’s democratic façade they engineered.

Throughout the last seventeen years of war and occupation, the Americans could not convince Afghans that the presence of US troops has been helpful and their aims benign. Hamid Karzai, the West’s manufactured leader of “liberated” Afghanistan, finally called the US an occupying power. Karzai believed, not without reason, that US officials paid lip service to his concerns and were willing to cut deals behind his back and occasionally even plotted to replace him with someone more obliging. In response, the Americans painted Karzai as indecisive and paranoid. They seemed to be forgetting when he first became President of Afghanistan in December 2001, Washington had praised Karzai as an Afghan “Mandela”. At the end of his presidency in 2014, the American dubbed him the Afghan “Mugabe”. With Ashraf Ghani, the US occupiers’ war prospects have deteriorated even more.

In his latest book, “Directorate-S”, Stephen Coll has elaborated on the dynamics between the US, Afghanistan and Washington:

“Washington’s relationship with the Pakistani Army, which effectively calls the shots on all matters related to internal and external security, is dysfunctional. Pacifying Afghanistan was always going to pose a challenge. Absent full-throated Pakistani collaboration, it would become next to impossible. The United States needed two things from Pakistan: first, that it would permit supplies bound for coalition forces in landlocked Afghanistan to transit its territory; and second, that it would prevent Qaeda and Taliban remnants from using Pakistan as a sanctuary and operating base.”

While Pakistani Army’s Inter-Services Intelligence made a show of cooperating with the US, they were backing their Taliban proxies in Afghanistan simultaneously, which they considered vital to their security. With its own record of having broken promises to Pakistan, Washington was in no position to coax the ex-colonial state. As a waning superpower, the United States could only exert minimal leverage. While Pakistan’s nuclear arsenal limited its susceptibility to threats and sanctions. Coll concludes that;

“Washington’s inability to solve the riddle of Pakistan’s Inter-Services Intelligence and to stop its covert interference in Afghanistan constituted the greatest strategic failure of the American war.”

Although Pakistan has weathered previous US aid cuts, mutually deceptive bilateral relations have driven this partnership towards an irreparable trust deficit. According to The Diplomat, “over time, both the US and Pakistan governments accepted the losses grudgingly and gains ungratefully and still found each other relevant in times of need… It is never easy to handle a war-related relationship, especially when that war has not been going well. This is even more so when there are multiple stakeholders with competing interests.” Washington’s growing ties with India have further deteriorated US – Pakistan relations. This is pushing Pakistan further into Beijing’s arms.

Pakistan’s deep state is autonomous and seems accountable to none. Similarly, US leaders have a history of betraying their allies and deceiving ordinary Americans. In Steven Spielberg’s latest film, The Post, depicts the 1971 Pentagon Papers revealing how the White House has been lying about its foreign affairs. These classified documents had laid bare the secretive crimes of the US politicians including Harry Truman, Dwight Eisenhower, Jack Kennedy, Lyndon B. Johnson and Richard Nixon. The subsequent leaders have been no different. In this blind race for imperialist hegemony, these leaders have committed gruesome crimes against humanity to serve business interests particularly those of the Military Industrial Complex.

Pakistan’s ruling state and political elites applied similar policies to better serve their vested interests. Under this bourgeois rule diplomacy, wars and politics are waged by imperialist and capitalist states only for their hegemony and profits for the moneyed classes. The Chinese and Saudi betrayal of their deepest friend Pakistan at the FAFTA meeting exposes the hard realities of this power politics. Ordinary ‘voters’ have no say in these policy mechanisations of the rich and mighty. The enmities and friendships of capitalist “nations” are actually those of the ruling classes. Loyalties can change suddenly. For the working classes, the fulfilment of their dire needs and human respite in these wretched societies will only come when their class rises up and takes power.