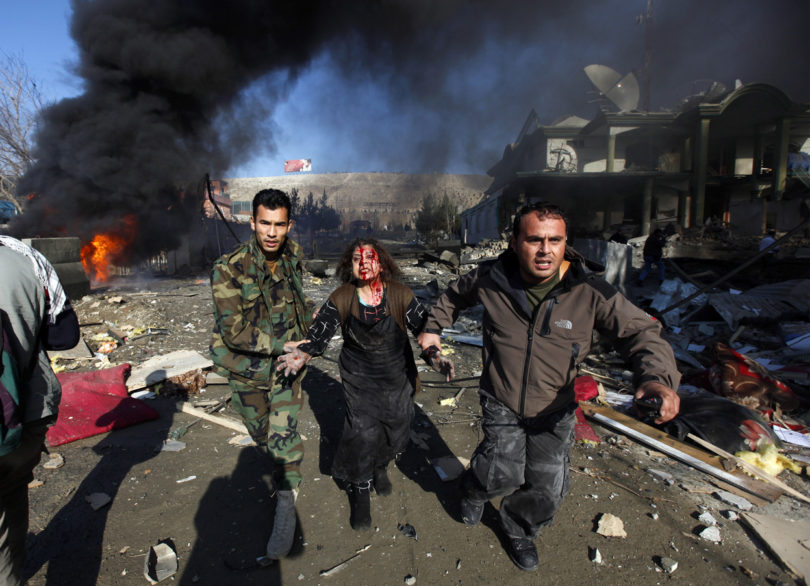 In the last few months, the relations between the Pakistani state and the imperialist’s contrived puppet regime in Kabul have been deteriorating rapidly. Inspite of statements of improvements and negotiated peace deals the skirmishes are spiralling in a dangerous trajectory. But within the two countries, the menace of fundamentalist terror has been striking what seems to be a relative impunity. In the recent period there has been an increasing involvement of the Russian, Chinese and the Indian states with their own imperialist designs in this on-going saga of Great Games in Afghanistan for almost two centuries. The defeat of the US imperialists and withdrawal of most NATO troops has encouraged these powers to assert more directly through their proxies in this disastrous conflagration exasperating the pulverisation of the peoples of this region.

The latest attacks struck Kabul and Jalalabad. The terrorists stormed a national television and radio station in Jalalabad on Tuesday killing at least six people. The Daesh or the ISIL (Islamic State of Iraq and Levant) claimed responsibility. Last month, the US military dropped the GBU-43/B Massive Ordnance Air Blast bomb, dubbed the Mother Of All Bombs, on ISIL positions in Nangarhar province with Jalalabad being its capital. On May 2nd the ISIL’s terror struck the US Embassy in Kabul injuring three US soldiers and killing eight Afghans. In recent years Daesh has been gaining strength claiming to be at war with both the U.S.-backed government and the Taliban insurgent groups. It had also claimed responsibility of the terrorist attack on a military hospital near the US Embassy in March that had killed at least 30.

The US imperialists are in the panic. They were in fact defeated and had to beat a retreat but their ostentatious imperialist prestige forces them to maintain a certain control in the region. The US has conceded that the Afghan territory under the Ghani government’s control fell from 72% to 57% during the last year. The planners in Washington are aware of the fact that their puppet regime in Kabul has a limited authority and is corrupt with involvement in heinous crimes. In their frustration, imperialist experts are now amplifying the blame game.

Lisa Curtis, the White House’s adviser on South and Central Asia, proposes abolishing Pakistan’s status as a “major non-NATO ally”, with the restrictions on military aid depending on the country’s action against ‘it’s patronised’ terrorist groups and increasing US unilateral military actions on Pakistani territory. The new US administration’s experts are singing the old chorus. It was the CIA that initially abetted the Pakistani state and its agencies to organise and train these reactionary Jihadis in a counter-revolutionary insurgency against the Saur Revolution of April 1978. They orchestrated the links between the Pakistani and region regime’s agencies with these Islamist recruits by imposing the most ferocious Zia Military dictatorship in Pakistan that coerced and brutalised society through Islamic reaction.

Recently Dan Coats, head of US intelligence agencies conceded imperialist pessimism: “the security and political situation in Afghanistan will also almost certainly deteriorate through 2018, even with a modest increase in the military assistance by the US”. The defeat of US aggression and invasion in America’s longest war can be termed as ‘the retribution of history’.

It is clear that Russians and the Chinese are taking advantage of this weakness of the US and are negotiating with the various Taliban leaderships. Moscow and Beijing have not very different motives and they have their own vested interests and strategic designs behind such moves. Indians are following the act, enticing some Islamic fundamentalist groups and factions within the official regime for their proxy conflict against Pakistan. These developments have strengthened the Pakistani deep state to pursue its decades-old policy of ‘strategic depth’, of supporting and sustaining the friendly Taliban factions. They believe their Afghan policy being vindicated. But what they are refuting is the history of the experience of Pakistanis state’s involvement that these fanatic groupings now stashed with black money.

However these Jihadists have gone rouge too often, wrecked havoc in Pakistan and cannot be trusted. They can only be hired, not bought permanently. The changing of loyalties of these mercenaries has been a norm in this reactionary insurgency. These warlords and religious clerics leading these terrorist outfits have amassed obscene black wealth in this war of attrition. Pakistan’s deep state’s policy of supporting these Islamicist fanatics often ended up in facing self-destruction by these Frankenstein monsters. The war in Afghanistan had spilled into Pakistan soon after it was started. The devastation it brought to Pakistan is beyond repair within the existent system.

After the creation of Pakistan, Afghanistan was the only country that rejected the creation of Pakistan and voted against its membership of the UNO in 1948. The Afghan rulers never accepted the Durand line drawn by the British imperialists. It remains unresolved. With the intervention of western and regional imperialists and states the quagmire of Afghanistan has become more complex and blood stained. The resolution of the Afghan conflagration was and is not possible within the boundaries of these nation states. The rulers of these states in the region preside over societies that are in severe crisis and social unrests. Their motives are to plunder Afghanistan’s resources and use its strategic geographical importance for their elites’ vested interests. At the same time, they use the external hostilities as dangers to their country’s national sovereignty. This is what Clausewitz termed as ‘war as the continuation of domestic politics by other means’.

They exploit these manufactured external dangers and threats to dissuade the working people from fighting against exploitation and crush the mass revolts against the system in the name of the national sovereignty. But they cannot resolve any of the domestic or the foreign issues. Oppression misery, poverty, disease and deprivation continue to agonise the toiling classes. In the wars and insurgencies, it is the poor that suffer most. Paradoxically it is these very working classes that can put an end to these domestic and foreign policy catastrophes of a rotten capitalist regime. Only through their class struggle this harrowing system that has agonised the oppressed for generations be abolished.