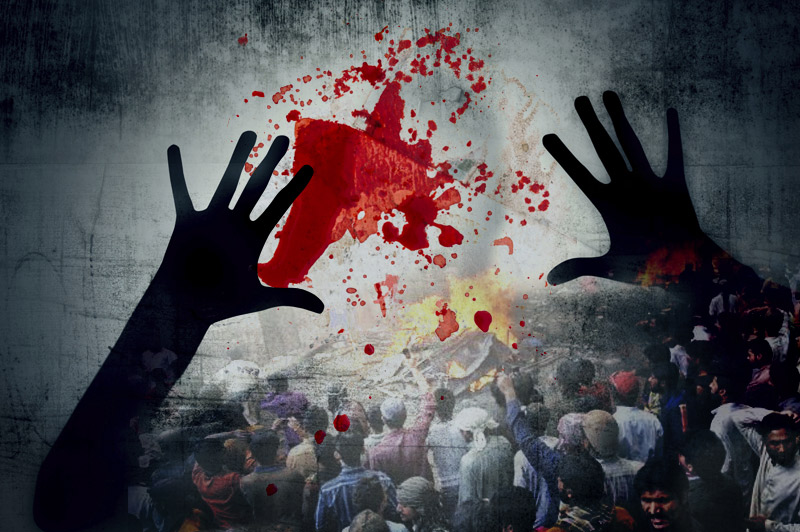 The legalistic protests of the civil society are not of much avail and these sectarian fanatics in a binge of venomous hatred are slaughtering and devouring religious and sectarian minority communities with impunity. In spite of the gestures of the state bosses and various regimes, there seems to be no will or desire of the ruling elites to stop this harrowing increase of religious aggression. The reality is that even the so-called liberal and secular regimes have often relied on conservative forces and the Islamic clergy to stave off threats to their bourgeois rule from the toilers and youth.

The Judicial Commission set up to investigate the Quetta carnage of August 8th has come out with a damning report compiled by Justice Qazi Faez Isa of the Supreme Court. The report refutes the escapist ‘foreign hand’ alibi, routinely parroted by the successive governments and the media.  It clearly states, “The suicide bomber was a Pakistani national and so were a number of his accomplices.”

The commission also condemned the instigating role of the media: “(Media) has very few stories about the victims of terrorism. Media coverage seems to be centred on the propaganda of terrorists, which is disseminated in breach of Section 11W of the ATA. The commission has recommended that if the media broadcasts and propagates the views of terrorists, then those doing must be prosecuted in accordance with the law.”

The Pakistani society is passing through a period of a callous indifference of the political elites towards the excruciating socio-economic miseries the vast majority of the society is going through at the present time. There is certain inertia in the class struggle that brings despair and hopelessness amongst the masses in the prevailing milieu in the country. In such periods of social stagnation the froth of religious, sectarian, caste, ethnic and other reactionary prejudices of the past do engulf societies. The ruling classes exploit these prejudices and nurture them as instruments of driving a wedge into the unity of the class struggle. These sectarian outfits operating with the financial dosage of black capital after a certain financial accumulation, acquiring repute and strength often spiral out of the control of their creators and become virulent brutes disrupting the imposed order of their bosses in the state and bourgeoisie.

The social nuisance of the sectarianism is far more exaggerated than their actual political support amongst the population. In seventy years of Pakistan’s existence, the religious right never got more than five percent of the popular vote. Yet in this present epoch where the dominating religiosity is a reactionary burden on society, its scarring cultural, social and ethical values. These sectarian frenzies at the present are more prevalent amongst the petit bourgeois, an erratic class exuding their frustrations in religious hysteria, not being able to rise up the rungs of the socioeconomic system. At the same time, there is a certain provisional and mythological social base of these religious tendencies in the most primitive layers of society.

However, since the 1980’s the indulgence of the state in fostering this bigoted sectarianism and a sharp rise in the enrichment of the top clerics through the violent crusades in the name of religion, have further aggravated intemperance in these vicious sectarian outfits. The imperialists and the deep state originally forged these sectarian organisations for their reactionary acts such as the counter-revolutionary Jihad in Afghanistan. In the subsequent decades, the various democratic regimes continued to use these sectarian proxies with indoctrinating madrassas burgeoning across the country. The internecine conflicts around the influx of black money between the clerical bosses intensified.

This started the process of splintering of these sects all vying to get hold of a greater share in this plunder. Every new split away faction acted in a more bestial manner to market its terrorist and tyrannical potential. There are much more Islamic sects in Pakistan than there were at the time of Zia’s sinister coup. These are further proliferating and poisoning social relations with rude intrusions in the private beliefs and lives of individuals and families.

These socially conservative tendencies are now at the helm of the politics, social life and the state. The sectarian malice is now a political weapon with the constitution littered with Zia’s draconian laws that legalise the vengeance against rival sectarian communities. From the blasphemy laws to the clauses against women are exploited to settle scores of financial and property disputes. Religion has become a profitable business in terms of dread and revenge for those who can pay these brutish sectarian mafias.

Those involved in crime and corruption, the drug barons, extortionist property tycoons, politicians, capitalists, landlords and businessmen pay these religious organisations to get their vested interests served through violence, kidnappings and brute terror of these religious vigilantes. To expect the obliteration of these hatreds and sectarian violence within the existent laws, constitution, state structures and the system as a whole is mere self-deception.

Preaching the resolution of this mayhem within the confines of this system is deceitful and treacherous. Only a revolutionary movement of the oppressed classes from the womb of society can transform these reactionary social, economic and cultural tendencies cleansing society from this malicious sectarian venom. Without a surgical amputation of this obsolete and brutal socio-economic system i.e. capitalism, human body and soul cannot be liberated from this sectarian suffocation, terror and malice.