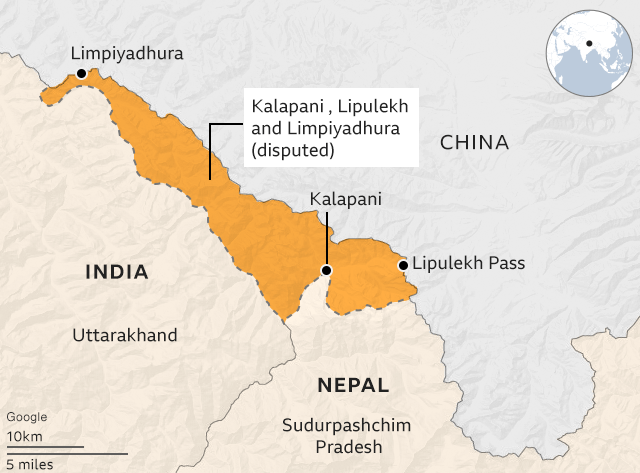 On Thursday, July 09, major cable operators in Nepal stopped airing Indian TV channels after they accused the latter of broadcasting “objectionable” content and airing “false propaganda” regarding Nepalese Prime Minister K.P. Sharma Oli. Local media in Nepal claims that Indian media is exaggerating the news surrounding the ruling party’s internal rifts and Prime Ministers’ exit. Of late, the ruling Nepal Communist Party (NCP) has plunged into inter-party squabbling resulting in demands for Prime Minister Oli’s resignation. Oli himself blamed India for the uproar in the party against him. His statement reflects how Nepal’s southern neighbour is desperately striving to keep its sway intact in the country against the ever growing Chinese influence in recent years.

The recent row between Nepal and India all began when Nepali parliament, on 18th June, approved an updated political map of the country which included land controlled by India, namely Limpiyadhura, Lipulekh and Kalapani. The Indian government rejected the map saying “it is not based on historical facts or evidence”. Kalapani has been in Indian control since the Indo-China war of 1962 but the flare-up of the issue at this particular time signifies broader regional rivalries.

Due to its geographical proximity with India and poor infrastructural facilities on its southern border with China, Nepal has always relied on India for goods imports, energy supply and even trade with outside world. It is not only a landlocked but also ‘India-locked’ country too. There is sizeable Nepalese immigrants working in India. Before the abolition of monarchy, the Nepali opposition parties used to operate from Indian soil. That’s why Nepal has always been at the mercy of India, economically and politically. Whenever Nepal attempted to challenge or reduce the economic hegemony of India, the Indian state would respond politically and economically. In 1989 the Rajiv Gandhi government imposed an economic blockade upon Nepal after a dispute arose over the renewal of trade and transit treaties between the two countries that expired that year. But the trade and transit dispute was only the tip of the iceberg. The real problem which irked the Indian government was the growing Chinese-Nepalese cooperation. Nepal had recently purchased anti-aircraft guns from China which infuriated India that had a monopoly over arms-sales to Nepal through a previous treaty.

India responded by closing 15 of the 17 border entry points to Nepal. India denied port facilities in Calcutta to Nepal which prevented the supply of oil from Singapore and other countries. Nepal faced severe shortages of oil, coal, goods, medicine and other vital supplies. There were long queues at gas stations in capital Kathmandu. Streets were devoid of cars and air and land travel had become difficult due to the shortage of fuel. Due to the unavailability of raw materials the Nepalese economy nosedived. According to historian Enayetur Rahim, “the economic consequences of the dispute… were enormous. Nepal’s GDP growth plummeted from 9.7 per cent in 1988 to 1.5 per cent in 1989”. Eventually Nepal had to submit to Indian hegemony.

But the rise of China as an economic giant at the dawn of the twenty first century meant a gloomy foreboding for Indian influence in the country. With the demolition of monarchy and the advent of democratic republic in 2006, of course as a result of the mass movement, the country further tilted towards China. As a token of increased Chinese influence in the country, the first Prime Minister of the country after the restoration of democracy in 2008 Pushpa Kamal Dahal, alias Prachanda, landed in China on his first foreign visit. Traditionally newly elected Prime Minister would visit India first.

China’s investment in Nepal overshadowed that of India in 2014. It reached $174 million, accounting for 60 per cent of total foreign direct investment. The increasing Chinese clout further frustrated India. In September 2015, India imposed an undeclared blockade upon Nepal. Using its political clout on Madhesi political parties India blocked the border-crossings, thus strangling the supply of goods in Nepal. At a time when the country was reeling from the devastations of a disastrous earthquake, the economic blockade further pushed it towards China.

In a bid to diversify and reduce its reliance on India for trade and commerce, Nepal has finalized a transit protocol with Beijing last year. The protocol has come into effect on February this year. As per the protocol, Nepal has now access to four sea ports and three land ports in China for trade with outside world, which will further reduce the effects of any future blockade from India. Similarly, the two countries have now direct internet connection which means Nepal is no longer reliant on India for internet.

China is heavily investing in hydropower, highways, airports, universities and schools to name a few. According to Chinese media reports, in the first quarter of fiscal year 2019-2020, 90 per cent of total Foreign Direct Investment (FDI) in Nepal came from China. Nepal officially became a part of China’s ambitious Belt and Road Initiative (BRI) in 2017. These investments are not without strings attached, of course. Given the track record of Chinese investment elsewhere in Africa, Latin America, Pakistan, and Sri Lanka, where the host countries were entangled in a vicious cycle of debts resulting in the appropriation of the host countries’ seaports, airports and other installations, it is probable that Nepal might be heading for the same fate.

With the increased economic influence comes increased political and social clout. Nepal has agreed to make Mandarin mandatory in schools in exchange for the payment of salaries to teachers. Of late, Communist Party of China and Nepal Communist Party have held virtual meetings. Furthermore, China has begun to play a proactive role in Nepali politics. Back in 2015, when Nepal was promulgating its new constitution China conveyed its concerns regarding the proposed federal structure of government and the number of provinces. During the recent crisis in Nepal’s ruling Communist Party the Chinese ambassador in Kathmandu, Hou Yanqi, met several leaders of the party to diffuse the crisis. A majority of Nepal Communist Party Standing Committee member including ex PM Prachanda asked the Prime Minister Oli to step down.

The recent row over Nepal’s new political map has rather a symbolic character on the part of government in Kathmandu. Now that Nepal has reduced its commercial dependence on India, it is now flexing its muscles with New Delhi. According to Indian media outlets, Nepal has deployed troops on its border with India and has built a helipad. This is unprecedented. But despite the trade and transit agreement with China, Nepal can’t altogether divorce India. Nepal would still have to rely on Indian ports due to their short distances. The nearest Chinese seaport of Tianjin is at a distance of 4000 kilometers from China-Nepal border while the port at Calcutta is 742 kilometer away from Nepal-India border. The railway tracks being constructed by China to connect Nepal with Chinese commercial hubs are actually “soft loans” for Nepal, so China claims. But Nepal insists it should be in the form of grant. This will further entangle Nepal in China’s notorious debt trap.

The “Communist” government in Kathmandu might have envisaged extracting some crumbs for the Nepali masses by playing a balancing act between China and India but these two regional power houses have their own regional hegemonic designs. The recent revelation regarding Chinese “malpractices” and overcharging in China-funded infrastructure projects in Pakistan signify what awaits the Nepalese in future.

Nepal is one of the poorest countries in South Asia with comprador capitalism unable to modernize society. The country has been sandwiched in the great power rivalries of India and China. The communist party must understand that the plight of the masses can’t be addressed through diplomatic maneuvers in the rivalries of India and China.  These projects might probably bring some crumbs of development in the poor infrastructure of the country but the wider implications for the masses will be further impoverishment and renewed contradictions between the regional powers. There is no respite in the current profit-oriented capitalistic investments. Only a revolutionary overthrow of the rotten capitalist system can bring prosperity for the masses.