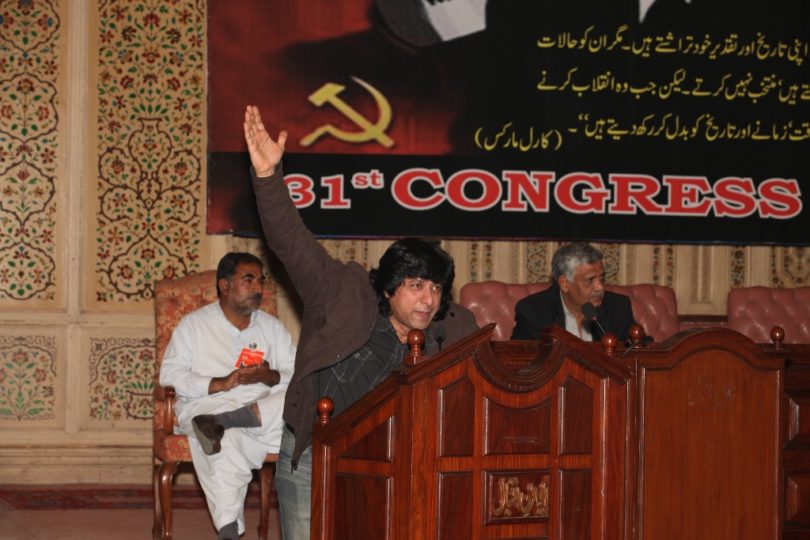 On Thursday, March 28th the renowned singer, left-wing politician and chairman of Barabri Party Pakistan, Jawad Ahmad was barred from speaking at an event organised in the premises of Faisalabad Arts Council after he had criticized Prime Minister Imran Khan. While speaking at the event his mic was snatched away and dissuaded from continuing his speech. Jawad left the podium to avoid possible conflict between the hooligans and students at a social media conclave where he criticised the anti-people policies of Imran Khan and his government according to the press reports. The PTI’s candidate for Mayorship of Faisalabad Nadeem Sadiq Dogar’s brother Babar Dogar and PTI’s local leader Rana Zahid Mahmood led this execrable act of repressing Jawad’s speech. In this ugly scenario, the thugs these PTI leaders had brought with them started shouting slogans in Imran Khan’s glorification and tried to stop Jawad Ahmad from speaking any further. This incident yet again lays bare the neofascist, vulgar and lumpenised mindset and the cultural, political and ideological characteristics that PTI has engendered.

Later Jawad Ahmad replied to this assault in a Social media message, “Just to clarify to those who don’t know. I was invited in Faisalabad today as Chairman Barabri Party Pakistan by Social Media Conclave to make a political speech and certainly not to speak on social media. That is why I criticized the policies of PTI in general and Imran Khan in particular…I told the audience about how Imran Khan is representing and serving the 1% & not 99% of Pakistan’s populace. Imran Khan had gone to London a few years ago to support his Ex Brother in Law Billionaire Zac Goldsmith, a Tory right-winger, against Labour Party’s candidate Sadiq Khan, son of an Expat Pakistani bus driver. Sadiq Khan had won…Also, another thing that people really have to know is that Zac Goldsmith, Imran Khan’s Ex Brother in Law that he supported against Sadiq Khan in London Mayor’s election was criticised later for his role in promoting Islamophobia & racism against immigrants during his campaign…I don’t think that was personal at all. It was just a historical fact, which Imran Khan can never deny. It showed the class character of Imran Khan. A man is known by his actions committed, the company he keeps and the trends he sets. Imran Khan’s politics was built with money from the rich. Payback time now.”

The present regime that is perhaps the most ludicrous if not the tragic façade of prevalent bourgeois democratic setup, is recalcitrant of any genuine freedom of expression, criticism and debate. Even for the tiny minority that has the financial and social means to participate in politics within the restricted confines of the moneyed political spectrum has now deteriorated further.

“In a capitalist society we have a democracy that is curtailed, wretched, false, a democracy only for the rich, for the minority. The dictatorship of the proletariat, the period of transition to communism, will for the first time create democracy for the people, for the majority, along with the necessary suppression of the exploiters, of the minority…Democracy is a form of the state, it represents, on the one hand, the organized, systematic use of force against persons; but, on the other hand, it signifies the formal recognition of equality of citizens, the equal right of all to determine the structure of, and to administer, the state… Bourgeois democracy is a democracy of pompous phrases, solemn words, exuberant promises and the high-sounding slogans of freedom and equality. But, in fact, it screens the non-freedom and inferiority of women, the non-freedom and inferiority of the toilers and exploited.”

However in Pakistan as in most of the underdeveloped countries, this democratic façade is even worse than the one described by Lenin that was prevalent in some of the countries where the bourgeois industrial revolution had made some transformations in the pre-capitalist setups. From India to Hungry and from Brazil to Pakistan after the recent elections or selections of the right-wing populist leaders as new rulers there is a gnawing threat of neofascism that haunts societies. This lays bare the impotent, truncated and fabricated character of the so-called democratic institutions and their rulers. These political and financial upstarts are subject to the whims of the forces of financial corporate capital and the black moneyed mafias that have interactions with the forces that hold the actual reigns of power and call the shots. None of the Pakistani democratic rulers at least in the last four decades have had the courage and strength to break these strangleholds. Conveniently they have immersed themselves into an orgy of plunder from the leftover crumbs from the loot of imperialists and the bastions of power.

The present PTI regime is perhaps the most odious example. Its social base is mainly amongst sections of the middle classes. Trotsky once wrote, “The petit bourgeois believe in only one god—power.” Add to that money, glamour and fame and the phenomena of Imran Khan’s rise is laid bare. The dependence on Umpires, the talk of Judicial coups and whipping up religious and neoliberal cultural hotchpotch to attract a disgruntled and frustrated youth have been typical features in the PTI’s politics. The stark threat it poses is that with Khan in power, as the socio-economic and cultural conditions are deteriorating rapidly, the enhanced frustrations give rise to these neofascist tendencies amongst the youth. As a class, the petit bourgeois has no independent character or a role to play in alternating the socioeconomic situation prevalent in society. It’s a frenzied class engrossed in a maddening rush of cutthroat competition to sabotage others and surge ahead. It swings from one extreme to the other.

The viciousness of this assault on Jawad Ahmad above all exposes the malaise that is set in society. The lack of a massive peoples movement, the provisional inertia gripping the social order and the moneyed politics have crushed the ideological currents in the political life of the country. It has given rise to this cultural and social sickness that is choking society.

However, the threat of a complete fascist domination is far fetched and exaggerated. Imran Khan’s semi-religious, semi-liberal mélange is, in fact, a replacement of the purely Islamicist parties that failed to gain a wider social base for reaction. PTI cannot expand beyond a meagre proportion of the masses to impose despotic rulership with this absurd theatrics, nationalist and religious chauvinism.

In this relative political vacuum and inertia where these PTI vigilantes tried to forcibly silence Jawad in their arrogance and intoxicated by delusional support of the ‘citadels of power’.  However, there is a seething revulsion against this regime of black moneyed upstarts and the Mafiosi capitalism they represent. On the other hand renewed protests of teachers, insurance workers, civil servants, journalists, dockworkers and several other sections of Pakistani working class are on the rise. These are the real forces that shall smash any aggression of fascist imposition in Pakistan. The strikes and protests may be sporadic at the present moment in time but these are crucial to understand the massive upsurges of the workers, youth and peasants that impend in the stormy days ahead. These shall not only fight back against the PTI regime’s socioeconomic onslaught and political repression but will challenge the capitalist system as a whole.

The PTI regime, in record time, has proved to be the most incompetent, corrupt and callous towards the oppressed classes. Its main characteristic has been the subservience to the forces that be. And even there things are not that rosy any more as the volatility and turbulence in the womb of the society is spurting up heat waves that pierce through the so-called ‘on one page’ exposition being portrayed at the top. Contradictions are on the rise. All the mainstream parties have no alternative politics, socioeconomic programme and respite to offer for the toilers and poor of this tragic land.

The corporate bosses and the masters of the state and morality control the media and the intelligentsia. Their manoeuvres against the oppressed are adding insult upon injuries of the toiling classes. The social media is all over the place particularly the obnoxious and abusive posts of the PTI’s Imran adulating lumpen youth. But history is witness to the fact that when all outlets and paths are blocked and ruling classes pose greatest of cohesions the crisis of the system rips them apart precipitously—opening floodgates for revolutionary currents.

Jawad Ahmad faced this vicious assault with dignity and courage. In his move towards left politics, he has proved to be above the petit influences of popularity, money, glamour and above all power for which most celebrities crave. However, it is crucial for anyone arising in the left leadership to understand the class character of society and the decisive role of the working classes in changing and developing society. The capitalist institutions created to perpetuate class exploitation; coercion and subjugation cannot be relied upon for any betterment of society and the lot of the oppressed. Creating any hopes in these institutions could be lethal for the class struggle. The middle class cannot play a leading role. Individuals sometimes do play a limited role but then again they have to bring themselves to the ranks and conditions of the proletariat to be worthy of it. But for the left to arise and unite in creating a genuine revolutionary movement for a socioeconomic transformation it is absolutely necessary that the character of a Pakistan’s revolution be determined. Hitherto experiences prove that to transform this society this character can only be socialist. Theories of bourgeois democratic and other staged variants put forward by some left leaders in the past have proved to be failures for the workers movements. Such ‘changes’ only ended up in aggravating misery and setbacks for the class struggle. The capitalist system in Pakistan is calamitously ravaging society. Its capacity to reform and develop society was never in its capacity. Its overthrow by a socialist revolution is the only road to emancipation.