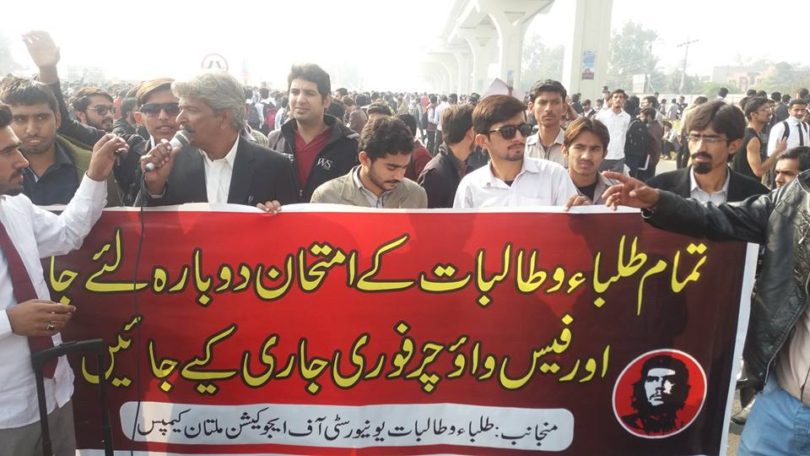 On 7th December 2016, University of Education Multan (UEM) students protested against the administration’s decision; more than 200 students were not allowed in mid-term exams of their 7th semester for ill reasons. UEM administration treats students with physical punishment to verbal-lingual vulgarity, using repressive steps to control students. Students were unable to submit their semester fee on the first due date. The administration issued another notice, asking students to submit their fee before exams. Students went to banks for fee submission but bank manager said he wasn’t given permission by the UEM administration to collect the fee. Later, students went for exam and Principal, along with other teachers, stormed in the examination centre and beaten students, they cut hairs  students, and cancelled their papers.
In reaction, students started organizing, under the leadership of BNT and the Struggle team. A leaflet was distributed, covering following demands: 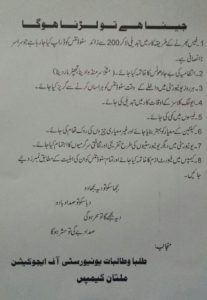 Very next day, students organized a peaceful protest and chanted slogans against the administration. A meeting was held after the protest in which an action committee of the students was elected by all the participants.In that meeting a decision was taken to block the Bosan road, the main road of Multan city which is a hub of educational institutions, and organize a protest on 8 December at 7:00 am. An appeal was also made to the students of different universities and colleges to join the protest in solidarity with the students of UEM. 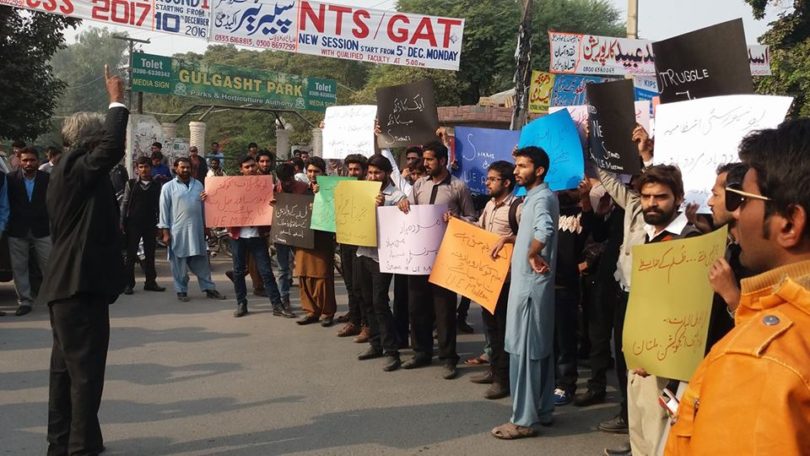 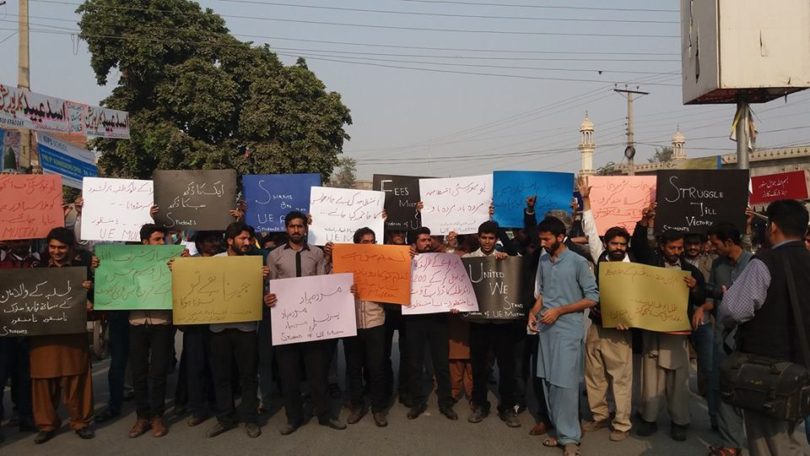 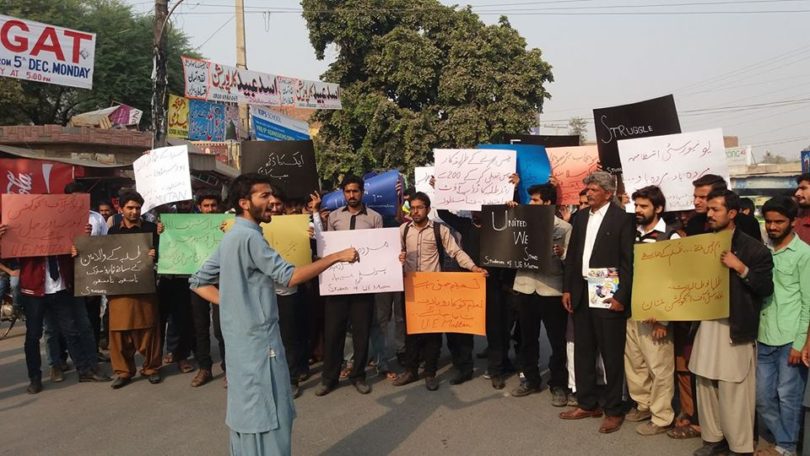 The horrific terrorising environment built by the policies of the UEM Principle were unable to terrorise the students anymore. The power of unity was realized by the students and the next morning more than 1500 students gathered on UEM main gate. They blocked the Bosan road from 7:00 am to 2:00 pm, this 7 hours’ road block forced the administration to take back their decisions. These 7 hours were full of energy, revolutionary enthusiasm , joy and activities including speeches, slogans, dance and songs by the students. Every student was there to protect the other student; everyone was there to sacrifice for the other. Students were threatened to be jailed or beaten up by the Police, if they don’t disperse . But students stand firm and were determined to win their demands. Hundreds of male and female students from different educational institutions including Institute of Southern Punjab (ISP), Government Emerson College (GEC), Government Science College, Baha-ud-Din Zakariya University Multan, National Fertilized Corporation Institute of Engineering & Technology, participated in the 2nd-day protest. Parents of victimized students also stood firm to support and secure children’s future. Moreover, UEM employees left their work in solidarity with students.

Students, holding banners of Che Guevara and placards, chanted slogans ‘To live is to struggle’, ‘Down with UEM administration’, ‘Down with District Administration’, Down with Fascism, ‘Go Principle Go’, ‘No to abusive language’, ‘No to Sexual Harassment’. Unity and mood of the protesters were the main factors and the Struggle team acted as a catalyst in bringing down administration on knees. A day before, Principle was full of arrogance and ready to play with the future of students, apologised from students and their parents, and allowed students to submit the fee and appear in midterm exams. One of the permanent teachers of UEM, who beaten a student violently in the examination hall, was fired in response to the pressure built by the protest.
It was also decided that if the administration takes any revengeful action against any of the protesting students or if they don’t act according to students’ demands, the protest will be spread to across country. These gains help to unlearn student’s fear of fascist administration and protest turned into a festival. The next morning students submitted the fee, allowed to appear in exams. Moreover, dropped out students were also given permission to appear in exams by the administration. The rigid authoritative environment in university was changed and most importantly students now know how to organize and fight for their rights. 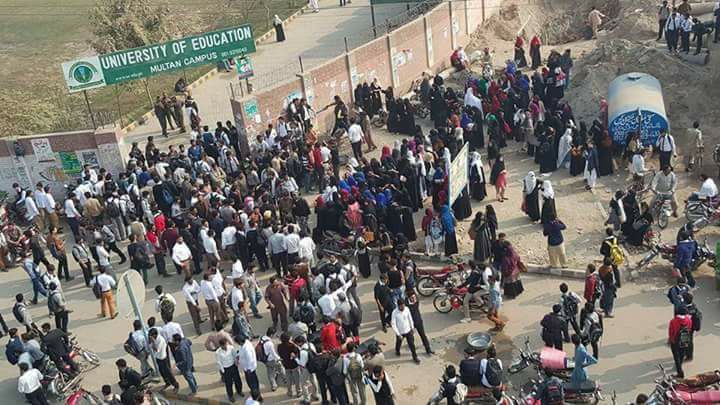 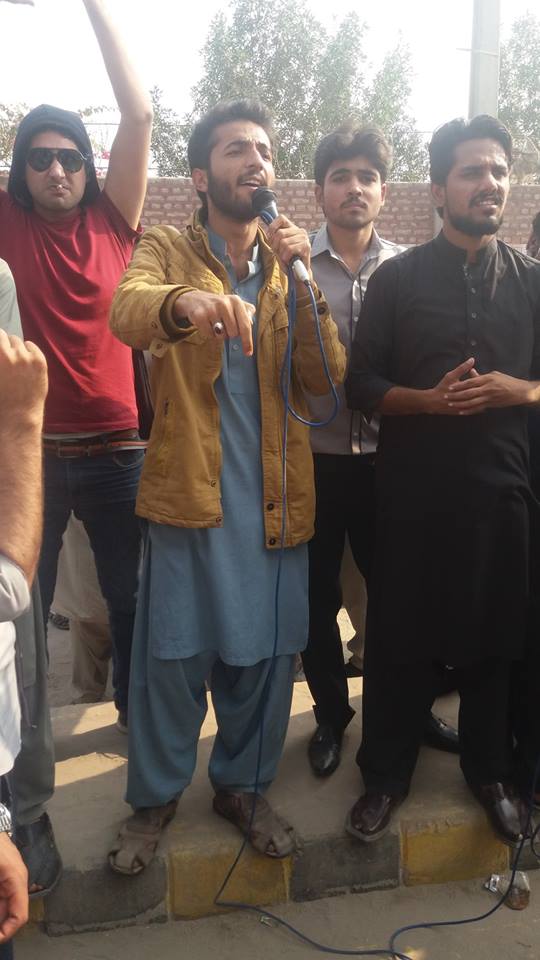 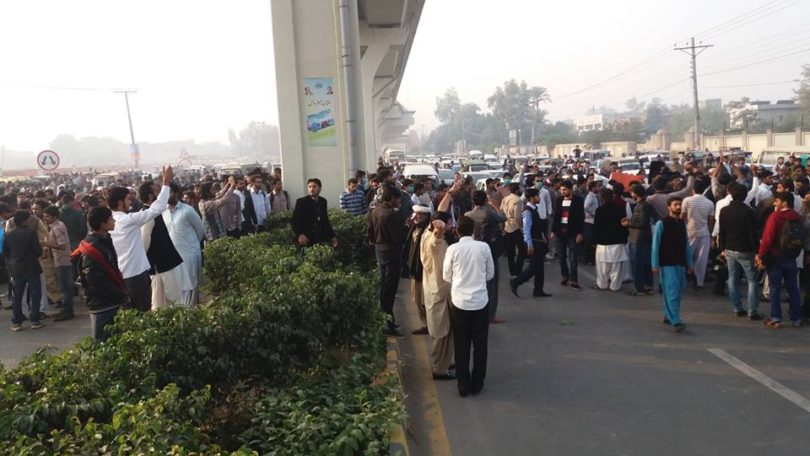 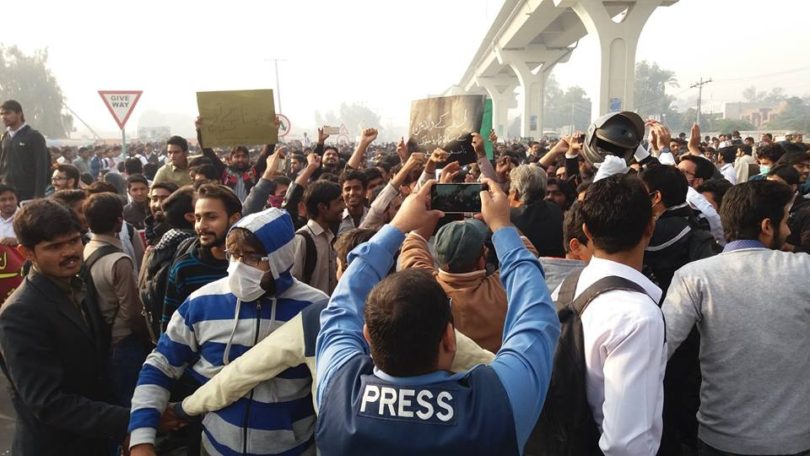 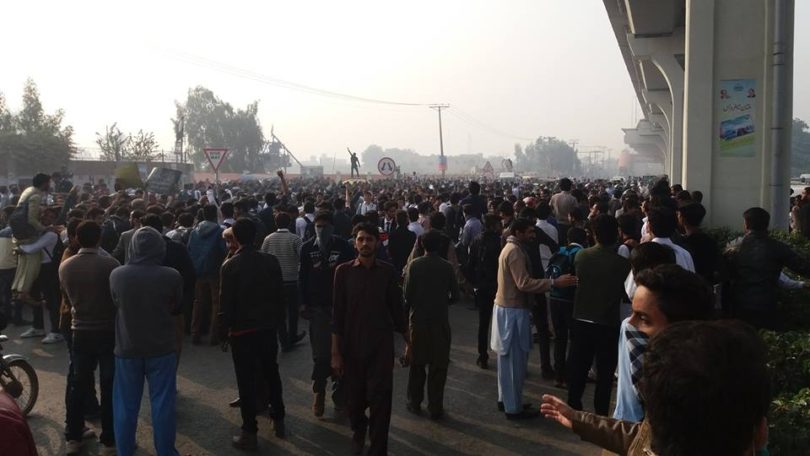 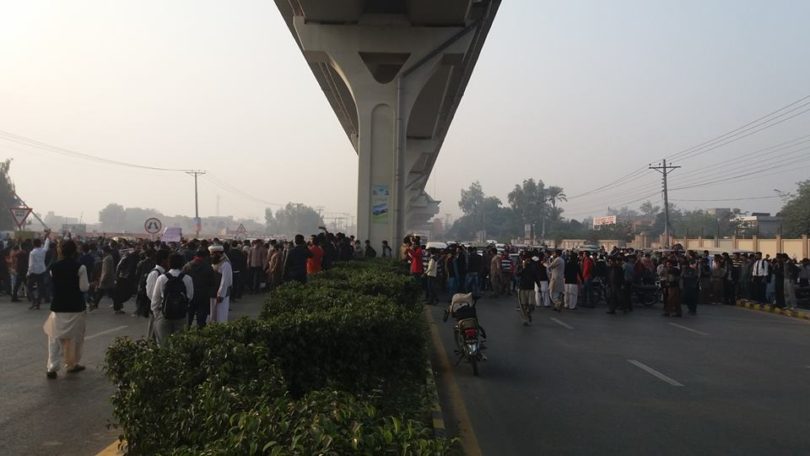 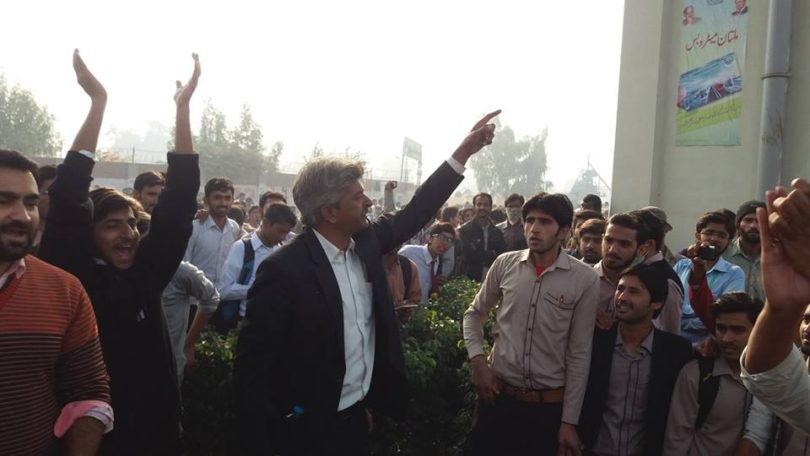 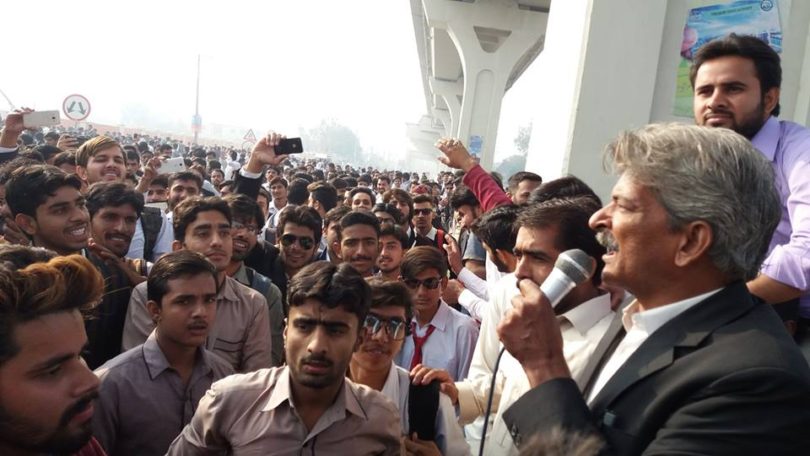 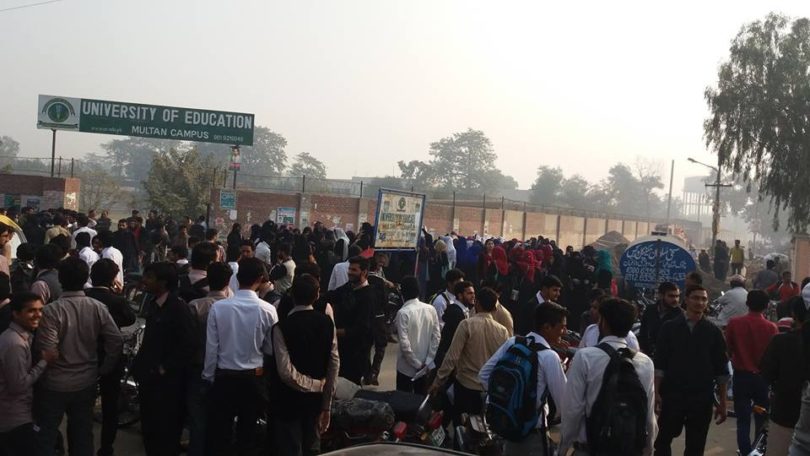 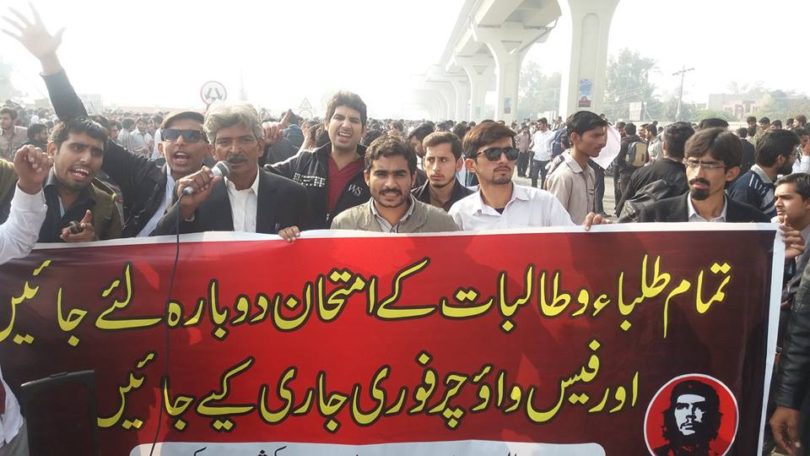 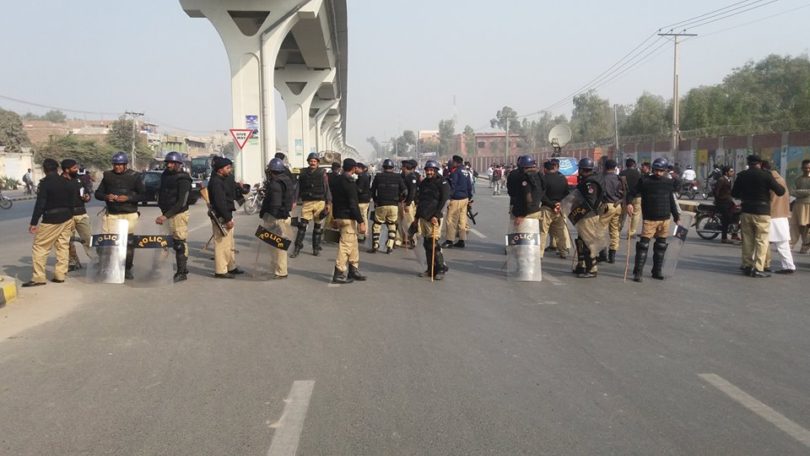 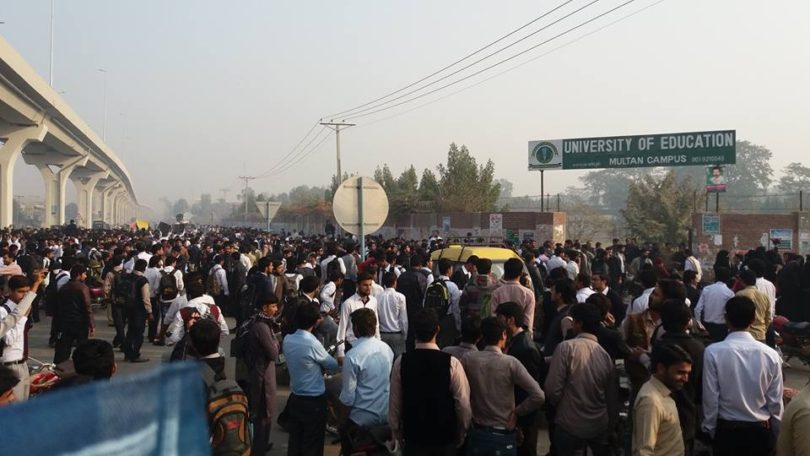 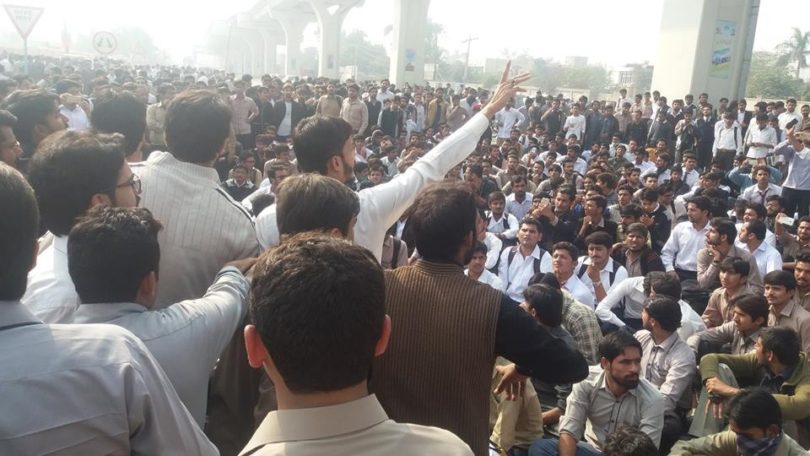