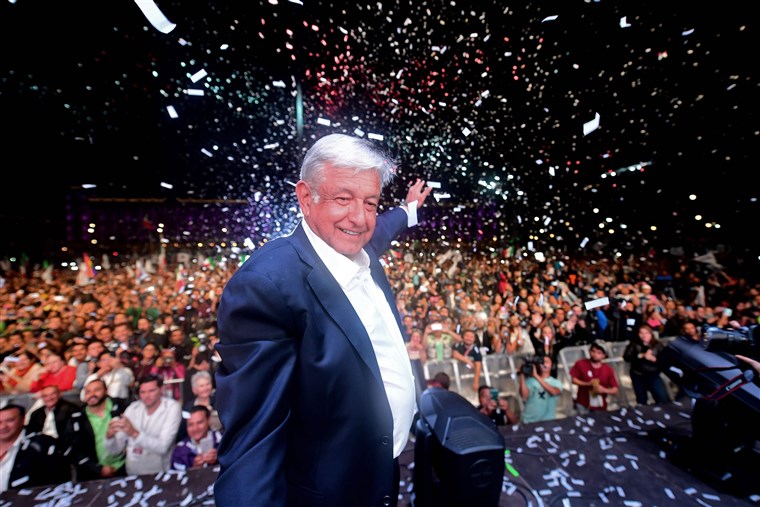 On the night of July 1, 2018, Zocalo square — Mexico City’s historic centre framed by palaces and cathedrals built under Spanish rule — was jammed by supporters of Lopez Obrador, dancing to a mariachi band as they waited for the election winner. There was a sense of hope and optimism in the air with the crowd joyous for the prospect of an end to the nightmare of violence and poverty that has brought much pain and misery to the people of Mexico.

Voters elected Andrés Manuel López Obrador (AMLO) of the National Regeneration Movement (MORENA) as Mexico’s new president. It has also been the most violent campaign Mexico has experienced in recent history, with 130 political figures killed since September 2017. This is the first time a candidate won an outright majority since 1988. Lopez Obrador’s coalition is poised to control both houses of Congress. He’s on track to win more than three-fifths of seats in the lower house and 70 of 128 in the Senate.

More than half of the country’s 130 million-strong population live in absolute poverty. On social policies, Lopez said he would double pensions for the elderly upon taking office on December 1 as a first step to reducing Mexico’s disparate income levels. López Obrador eschews luxury and has promised to cut his own salary while raising the pay of the lowest government workers. He also campaigned on providing grants to university students and creating a public-works program that will employ 2.3 million young people. In 1995, López Obrador demanded that people in his native Tabasco stop paying their electricity bills in response to excessive utility costs — sparking a movement that continues today. In 1996, he organized blockades of Pemex oil company’s facilities to demand compensation for fishermen and farmers affected by the industry’s unmitigated pollution. At one Pemex protest, López Obrador was hit in the face with a rock thrown by a police officer, blood spilling all over.

Lopez is the first person to win the presidency of Mexico without the support of the bourgeois oligarchy, which makes him less constrained. In his final campaign speech, López Obrador announced that his government will go for a “peaceful-but-radical transformation…we haven’t made all this effort merely for cosmetic changes, for lip service”. Lopez also presents himself as a follower of Lázaro Cárdenas del Río, Mexico’s socialist president between 1934 and 1940. He is best known for nationalisations and expropriations of oil and other sectors of industry in 1938 and the creation of Pemex, the government oil company. He also revived agrarian reform in Mexico, expropriating large landed estates and distributing land to smallholders in collective holdings. It was Lázaro Cárdenas’s courageous stand that he granted Leon Trotsky, the leader of the Russian Revolution along with Lenin, the sanctuary in Mexico when the rulers around the world denied him refuge.

AMLO is despised and detested by the bourgeois and the imperialist strategists for the radical agenda he set out for his campaign. The Consejo Mexicano de Negocios (Mexican Business Council), an elite group composed of around 60 of the richest men and women in Mexico abhors López Obrador’s “poor first” campaigns. Jorge Castaneda, Mexico’s former foreign minister, a key figure in the apocalyptic crusade to derail Obrador’s campaign wrote, “He believes in old-fashioned nationalism. Old-fashioned statism. Old-fashioned protectionism. Old-fashioned subsidies across the board… this is a guy who is the wrong alternative for Mexico. He is tired, he is old, and he is obsolete. Wackos surround him and he has old ideas… People don’t go to his rallies or listen or believe in him because he speaks intelligently or eloquently or charismatically. They go because of what he represents — the end of the system.” Castaneda is 64 years of age. Lopez, also 64, struck back at Castaneda, “If this horror we’re living now is what they want to give us in the future, the past is preferable.”

Despite his radical rhetoric, Lopez Obrador is no socialist or Marxist. Affected by corporate media propaganda, AMLO has sought to assuage fears of the bourgeois by promising business leaders, “There will be no expropriations, no nationalisations” if he wins. Despite his assurances, the bourgeois doesn’t trust him.

They are terrified that the privatisation of the energy industry will be rolled back, and expanded social programs will push the country into debt. Lopez Obrador says his plans can be funded without deficit spending, with the money saved by eliminating graft. Washington is also annoyed with Lopez promising that all 50 Mexican consulates in the United States will defend the country’s migrants in courts. “Trump and his advisers speak of the Mexicans the way Hitler and the Nazis referred to the Jews,” he reacted at Trumps treatment of immigrants. The US intelligence services might soon be tasked of finding ways to depose him. But these balancing acts have annoyed some of Obrador’s left-wing supporters. “He’s not the same man. Now he spends lots of time with bourgeois political and business executives. The talk of revolution is gone,” said Jaber, a long-time friend. But López Obrador still mentions revolution on the campaign trail — just not the Cuba-like struggle to which he and his friends once aspired.

López Obrador’s government will be faced with a severe crisis, as the bourgeois will try to pressure him into retreating from his campaign promises using blackmail and economic sabotage. While expectations he has elicited amongst the masses will pressurise him to carry out the transformation he promised. Within the Mexican capitalism’s confines, not even the minimal of reforms can be carried through.

Lopez Obrador has been trying to distance himself from Hugo Chavez because of the present crisis in Venezuela. What he fails to understand is that the present crisis in Venezuela was not caused by Chavez’s radical reforms but his failure to abolish capitalism and the oligarchy by completing the socialist revolution. AMLO faces much greater challenges in today’s Mexico. To be remembered in history as a President who transformed the impoverished country and put an end to misery and exploitation of the oppressed, Lopez Obrador will have to take the path of revolutionary socialism or elapse into the abyss of oblivion.