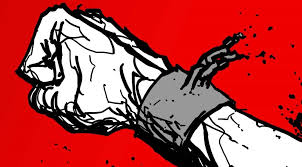 Every year, May Day is observed by the proletariat world over in memory of the American workers killed in a brutal firing by the forces of the US state in Chicago on May 1, 1886. Over 200,000 workers left work carrying white flags and demanding the eight-hour day. When they reached the Hay Market, the police shot at them and the flags turned red, drenched in their blood. However, the decision to commemorate this day as an international workers day was taken at the founding congress of the second international, in July 1889 in Paris under the leadership of great Marxist teacher, Fredrick Engels. May Day is the only event that cuts across the frontiers, transcends all divisions of region, caste, creed, religion, race, nationality in its quest to create unity and solidarity of the class struggle.

May Day 2017 is being commemorated at a time when there is turmoil; instability and bloody conflicts are ravaging societies across the world. The relentless crises of capitalism refuse to recover from the downturn from the financial crash of 2008. This has generated an unprecedented onslaught of the ruling elites against the working classes all over the globe. If the Keynesian model of capitalism with state intervention was a failure, the consequences of the monetarist model of free market economics have been outrageous. This neoliberal recipe was flaunted as the antidote to the flailing Keynesianist economics of the post second world war period during the early 1970’s. This trickle down model was supposed to bring higher growth rates, investments, larger productivity and a trickle down of income from rich to poor. It delivered none.

The policies of deregulation, privatisation, restructuring, downsizing and liberalisation under these monetarist regimes have wreaked havoc on workers under capitalist rule everywhere. According to US economists James Montier and Philip Pilkington, “the system which arose in the late 1970s was characterised by four significant economic policies: the abandonment of full employment and its replacement with inflation targeting; an increase in the globalisation of the flows of people, capital and trade; a focus on shareholder maximisation rather than reinvestment and growth; and the pursuit of flexible labour markets and the disruption of trade unions and workers’ organisations.”

These very policies are being pursued by all regimes based on capitalist exploitation and imposed stringent conditions by the imperialist financial institutions such as the IMF on countries like Pakistan. All political parties and leaders dominating this moneyed political structure are subservient to capitalism and hence carrying out massive attacks on the oppressed classes and forcing the destruction of the unions and organised labour. It is due to this politics of the last four decades and the conciliatory policies of the trade union and the left leaders that today the percentage of the organised labour in the unions in Pakistan is less than one percent, lower than ever in the country’s history.

Paradoxically capitalism on a world scale is showing no symptoms of recovery, healthy growth and social development. Pessimism prevails in the boardrooms of corporate institutions. Christine Lagarde, the IMF’s Managing Director in a speech last week to the American Enterprise Institute confessed, “Another decade of weak productivity growth would seriously undermine the rise in global living standards. Slower growth could also jeopardise the financial and social stability making it more difficult to reduce excessive inequality and sustain private debt and public obligations…Leaning back and waiting for artificial intelligence or other technologies to trigger a productivity revival is simply not an option.”

In the largest capitalist economy, the US, the society’s inequality and exploitation have been on the rise during the last four decades. Figures in the Guardian reveal that the share of US national income that went to the bottom 90% of the population remained steady at around 66% from 1950 to 1980. It then began a steep decline, falling to just over 50% as the financial crisis broke in 2007. During the 1961 and 1969 period, the bottom 90% of Americans took 67% of the income gains. However under Ronald Reagan’s regime in the 1980’s their share shrunk to 20%. In the time of Greenspan housing bubble of 2001 to 2007, they got just two cents for every extra dollar of national income generated while the richest 10% took the rest. The figures of income disparities and exploitation in other advanced capitalist countries are similar if not worse. In the former colonial world vast swathes of humanity are forced to live in destitution and extreme misery.

This situation has caused wars, terrorism, suffering, and bloodshed in so many parts of the world. This is accompanied everywhere with socioeconomic aggression against the working classes in the atrocious crusade for corporate profits. But in spite of the turbulence and the betrayals there have been recurring and defiant movements of the workers, youth and the oppressed masses against this vicious system. In spite of all the advances in technology and the so-called information technology, artificial intelligence and robotics and working class very much exists and the class struggle however despite periods of inertia it is still alive and kicking. The outbursts of class conflict blow up along with the other turbulent events exploding in these volatile times. The ruling elites are palpably worried of the looming dangers of revolutionary communism.

A few years after the crash in the wake of the eruption of mass upheaval in the Middle East and the Occupy Wall Street Movement, The Guardian wrote in 2012, “Communism is not just the carnival of mass protest when the system is brought to a halt; Communism is also, above all, a new form of organisation, discipline and hard work…Marx’s key insight remains valid, today perhaps more than ever…We feel free because it lacks the very language to articulate our unfreedom…Today all the main terms we use to designate the present conflict — ‘war on terror’, ‘democracy and freedom’, ‘human rights’, etc. are false terms, mystifying our perception of the situation instead of allowing us to think about it.” There are numerous sporadic strike and workers movements yet not united into a mass upheaval in most countries of the planet. Greater proletarian struggles and mass revolts impend. The workers shall strike with a vengeance against a system that has brought such harrowing misery and deprivation to their lives.

In an article in 1904, Lenin wrote on the significance of May Day: “Comrade workers! May Day is coming; the day workers of all lands celebrate. Their awakening to a class-conscious life, their solidarity in the struggle against all coercion and oppression of man by man, the struggle to free the toiling millions from hunger, poverty and humiliation. Two worlds stand facing each other in this great struggle: the world of capital and the world of labour, the world of exploitation and slavery and the world of brotherhood and freedom.”

The sole purpose of designating May Day as the day of unity of the workers of the world by the Paris International Socialist Congress was to prepare, unite and organise them into a single international proletarian movement. Its goal was and is the emancipation of the oppressed through a victory of revolutionary socialism. Today with the advanced communications the struggles in one part of the world can be seen and felt simultaneously in all the other parts of the planet. Mayday is above all a renewal of the pledge of the working classes to unite and fight in this class struggle to transform society. Its essence is profound: “An injury to one is an injury to all.”

Ever since the class society came into existence the class struggle has been the main contradiction and the movement to overcome exploitation, drudgery and tyranny of the ruling classes. Karl Marx wrote in the Communist Manifesto in 1848, “The history of all hitherto existing society is the history of class struggles…Freeman and slave, patrician and plebeian, lord and serf, guild-master and journeyman, in a word, oppressor and oppressed, stood in constant opposition to one another, carried on an uninterrupted, now hidden, now open fight, that each time ended, either in the revolutionary reconstitution of society at large, or in the common ruin of the contending classes.”

Now, this struggle has to be fought to the finish. Today’s science and technology has developed to a level that for the first time in human history it provides the means and the tools to obliterate all want and deprivation from society. Such a society will enter the realm of communism—the ultimate emancipation of the human kind ending class societies and the exploitation of humans by humans.