For the last seventy years, the elite’s liberal and conservative intelligentsia are undecided about the ideology of Pakistan – secular or a theocratic state? Constitutional accords of their political representatives don’t really decipher in a ripped social fabric. India is a glaring example where despite a ‘secular’ constitution one of the world’s most bigoted regimes is in power. The Hindutva chauvinism is playing havoc with the social relations. Pakistan’s 1973 constitution was already stuffed with contradictory clauses but with Zia’s reactionary graft, sociocultural life was strangled. The ‘democratic’ regimes had neither the will nor desire to undo this retrogression.

Although Zia’s theocratic despotism still prevails on the surface. Islamic fundamentalist sectarian groups use the obscurantist clauses to perpetuate sectarian violence. However, the underlying trends in society don’t necessarily comply with those edicts. With the rapid advance of Infotech communications, sociocultural interactions and moral values have been traversing the official versions cutting across state controls and censors. Hence hypocrisy has become a social norm. The people are now ridiculing institutions such as the Central Board of Film Censors (CBFC). The banning of some promising films recently has drawn ire from those seeking some entertainment in this rather gloomy society.

The 1979 Motion Picture Ordinance promulgated at the time when Zia’s atrocious rule was at its peak governs the CBFC that comprises of civilian bureaucrats; military agencies top officers, religious clerics, journalists and  ‘civil society’ activists. It is still an enigma that who really appoints them and with what merits of art, filmmaking and ‘enlightenment’. 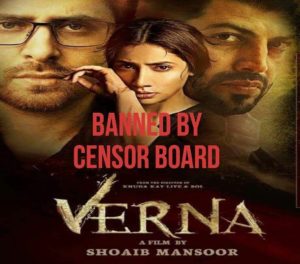 The CBFC’s latest victim was an attempted ban on the Pakistani release, Verna. One of its actors tweeted last Wednesday, “Ban on Verna is imposed to make those powerful people happy who don’t want masses to know what they do to maintain their hold on public… Verna gets banned while streets are flooded with fundamentalists and item numbers are getting a free pass. They can’t stand the truth…”

There is little chance that this movie goes into deeper socioeconomic causes of rape and brutality in Pakistan. But such is the fragility of the state’s elite that they can’t even tolerate a slight exposure of its underlying ethical character. Pakistan’s film industry has been in decline for decades. Zia’s dictatorship ferociously tried to gag film, art, literature and progressive currents in different fields of society. Until the late seventies not only the music, direction and filmmaking was top quality but there was hardly any movie that did not have connotations of the class struggle and progressive proclivities for social change. Apart from the state’s bigoted repression and decline in mass movements, the social malaise that has set in the last few decades also contributed to the decay of the film industry.

Inspite of being an undeveloped country Pakistan used to produce some of the world-class films. This was not accidental. Karl Marx wrote in The Economic and Philosophical Manuscripts of 1844,  “As regards art, it is well known that some of its peaks by no means correspond to the general development of society; nor do they therefore to the material substructure.” The vulgar commercialisation of art and the cultural rot that has set in ever since also had an adverse impact on filmmaking. Crisis of the social and economic system does not mechanically influence fine arts but it’s through a dialectical interaction that the filmmaking reflects the putrefying character of the historical epoch it is passing through. In such periods not only the generalised thinking is restricted but visions and aspirations also tend to shrink. Even the people’s revulsion against religious chauvinists who pose as the masters of our destinies and morality gets muted. But who are these people that determine what is moral and immoral for us?

Pakistan’s ruling class has not even been able to develop as a reformed, secular and cultured bourgeois such as the capitalist classes of Europe evolved during the Renaissance. Today’s obscurantist, corrupt and arrogant elite’s hypocritical morality mars social relations. In ordinary times these sectarian overlords of conformist ethics and guardians of state’s hollow doctrine are hired by the moneyed classes. Their upstart preachers and media barons infuse mass psychology with ultraorthodox sociocultural dogmas. But when the masses move into action entering the arena of struggle the society’s consciousness is radically transformed and these false prophets of morality exposed. The working classes become aware of their collective strength they actually possess in economy and society as a class. This generates a moral ecstasy, cultural revitalisation, mutual respect and charming aesthetics. It vents the social suffocation breaking psychological barriers that subjugate them for generations. A renewed and optimistic courage, determination and confidence develop. Their struggle gets fearless, an unforeseen culture of sharing and comradeship ensues. The thinking, in general, becomes bold and vision wider. Hence they rise to change every aspect and norm of society.

Trotsky describes the delicate role of the revolutionary party in its strategy during final phases of class struggle. He wrote in his epic work, Their Morals and Ours, “Permissible and obligatory are those and only those means… which unite the revolutionary proletariat, fill their hearts with irreconcilable hostility to oppression, teach them contempt for official morality and its democratic echoers, imbue them with the consciousness of their own historic mission, raise their courage and spirit of self-sacrifice in the struggle. Precisely from this it flows that not all means are permissible. When we say that the end justifies the means, then for us the conclusion follows that the great revolutionary end spurns those base means and ways which set one part of the working class against other parts, or attempt to make the masses happy without their participation; or lower the faith of the masses in themselves and their organization, replacing it by worship for the leaders.”

Film, music, poetry and art play a tremendous role in a revolutionary process. Not only they raise the consciousness and a vengeance against class exploitation and oppression, but also instil optimism and hope in the success of a socialist revolution. These fine arts can inspire and enthuse the will, determination and daring to carry out this historic task.