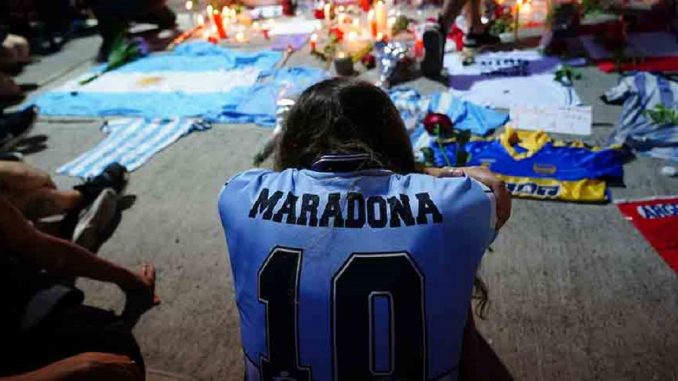 The death of Diego Maradona brought pain and sadness to a people that made him an idol and a world-wide legend. A D10S (God) with contradictions, made of gold and mud, but a God at last. But his death also brought many debates and even divisions, especially around his sexism, because the fourth feminist wave and the green tide question everything, even idols, legends and gods.

There is pain, tears and commotion over the man who brought our people some of its best joys. Like those goals against England in 1986, which, in addition to being sports magic, were felt as a kind of revenge for the defeat in Malvinas on a massive scale. That is why Plaza de Mayo was full. Because he knew how to put not only his body, but also his heart, out on the field. As he also did off the field, in many just causes.

Because of his spontaneous irreverence and anti-imperialism, for his explicit solidarity with many popular demands, for his support of the Mothers and Grandmothers (of the disappeared by the dictatorship), for his presence in 2005 at the FTAA counter-summit, for his criticism of the Vatican’s gold, and the list could go on… That is why we are so angry and we condemn the police repression and the government’s irresponsible improvisation in trying to make political use of Maradona.

However, none of all that we value covers his worst aspects: sexist, child denier and more. Impossible to hide. But was there, is there, or will there be any human being on this earth free of contradictions? That kid came out of a slum, a little onion turned world idol, lived in the midst of a fierce and decomposed capitalist and patriarchal system that turns everything into business and power fascination. That is why Maradona also had his photo with Menem and his ups and downs in the internal power struggles of the AFA and the FIFA.

That is why it is logical that in this country, one of the epicenters of the feminist wave – and on top of that “El Diego” died on November 25, a day of struggle against gender violence – harsh criticism arose from feminist sectors, especially from young women who did not live or are not aware of his trajectory. In this context, and just as we reject any deification, be it due to football fanaticism or nationalism, we are concerned over the signs of fundamentalism of the so-called culture of cancellation, which is another aspect of the punitivism that we criticize.

Who Will Throw the First Stone?

Yes, the legend of international football was just another sexist. There are images, videos and clippings of his worst patriarchal expressions on social media. Though he had a fortune, it took him years to recognize three of his five children and it is said that there are two more. And during his life he had denunciations of gender violence weighed against him. Of course, there are open questions about whether there was socially sustained and media sustained impunity. Perhaps that is why, together with the remorse over his death, we are left with a certain bitter aftertaste. But yes, he was a god who is not a god – because God does not exist – but a person.

Does it mean then that we should ignore or minimize these questions just because we are talking about Maradona, the number one player of the most popular sport on the planet, who is loved by the people? Of course not. At the same time, when giving our opinion on him, should we focus solely on his behavior as a healthy son of the patriarchy? No.

What’s more: one of Marx’s favorite phrases was “Nothing human is alien to me.” Those of us who want to turn over this entire system, the revolutionary socialists, need to win over the vanguard and then mass influence. And to achieve this, nothing human should be alien to us, less so if it is massive. That is why it is necessary to look beyond personal and immediate experience and try to interpret, as a whole, not as a part, the reasons behind a social phenomenon of such high impact as the death of Maradona.

The Artist and the Art

Our socialist and feminist perspective helps us understand reality in order to transform it. This practice implies analyzing and putting into words all the contradictions that this system tries to hide and confront them. On another level, in the debates about Maradona, such a well-known figure, the contradictions acquired levels of tense and divisive controversy.

This is because “radical” feminist sectors have long promoted a practice in social networks: the culture of cancellation, which attacks, calls out and condemns the person more than his behavior and the root causes that originate it. This mistaken punitivism 2.0 is not radical at all because it does not propose to combat the root of the problem, which is not this or that person, even if it is a famous person, but the capitalist and patriarchal system that benefits from gender oppression, and that is why it sustains it. At the same time, the cancellation of Maradona, feministometer in hand, is not understood and even felt as an attack by those who are saddened by his death. Far from helping advance reflection and consciousness, it reinforces unilateral thinking.

The key lies in trying to recognize the contradiction of reality itself: bidding farewell to an idol that is admired and felt without denying his sexist component. Just as punitivism completely mistakes the enemy by demanding greater punishment for the violent individual, cancelling this or that figure fulfils the same innocuous function. The real battle is to fight the institutions that build and reproduce false ideologies and concrete violence. Who we have to cancel is this capitalist and patriarchal system, not Diego, who we dismissed with pain throughout the country and the world, not Diego, who was a human god of gold and mud at the same time.