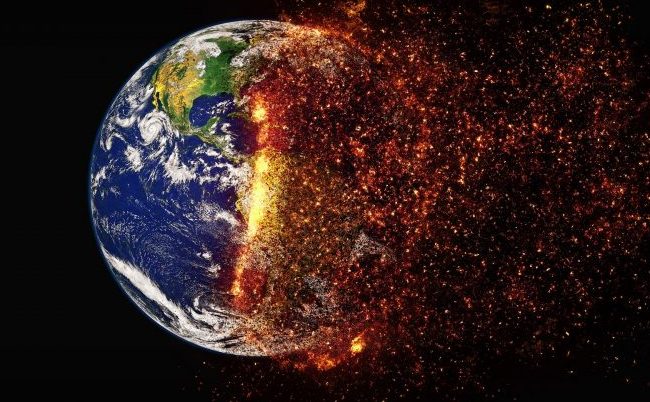 The extraordinary cold wave that struck Europe has once again brought forth the debate on climate change and its hazardous impacts on human life. Severe snow caused of disruption with flights and trains cancelled and traffic grinding to a halt on major roads. The cold spell, nicknamed “the Beast from the East” in the UK, is carrying freezing winds across the continent. In different parts of Europe, the weather has been given alternative names. To the Dutch, it is the “Siberian bear”, and the “snow cannon” to the Swedes. According to the AFP news agency at least 46 people had died.

However, this environmental crisis and the menace of climate change is not a natural disaster. It is the outcome of the capitalist system in its terminal crisis brutally exploiting and crushing the working classes and spreading unprecedented poverty, inequality and devastating the planet’s environment. The restoration of capitalism in Russia, China and Eastern Europe has led to a huge expansion of the corporate capital and this accelerated dramatically increased the global ecological crisis, on multiple terrains.

The consequences of a global fossil fuel based energy system are today clear. As a result of the rising global temperatures the ice caps are shrinking, sea levels are rising; water tables are drying up threatening agriculture with waterlogging and desertification. The extreme weather conditions are becoming more frequent. The effects of super-typhoon Haiyan in the Philippines surpassed in scale what scientists had already warned about. The control of the water resources has always been a key component of tensions between Pakistan and India as majority of water that flows through Pakistani rivers enters from Indian occupied Kashmir and other neighbouring countries.

Scientists agree that a global surface temperature rise of 2°C over preindustrial levels would trigger climate feedbacks, which, once started, will be impossible to stop. Melting ice sheets and glaciers threaten a catastrophic rise in the sea level threatening coastal cities around the globe as well as island communities and low lying countries such as Maldives and Bangladesh. The vast Western Antarctic ice cap is showing signs of instability, if it melts this could raise the sea level by seven meters. In addition air pollution has increased at an alarming level, killing more people worldwide each year than does AIDS, malaria, diabetes or tuberculosis. Air pollution is arguably the greatest environmental catastrophe in the world today. The automobile industry and fossil fuel conglomerates dominate world economy and politics. Regimes dependent on corporate finance capital and the upstart bourgeois and petit bourgeois anti-smoking campaigners dare not challenge these corporate giants. From traffic pollution, every man, woman and child inhales carbon emissions equalling 45 to 60 cigarettes per day in Beijing, Delhi, Lahore, Manila and many other metropolitan cities. In Britain, Germany and the United States, traffic congestion costs totalled $461bn last year, or $975 per person. This congestion is much worse in the daily ‘road rage’ traffic jams in underdeveloped countries.

As the earth’s temperature rises we can expect a devastating impact on freshwater resources with increasing droughts and heat waves. The glaciers are retreating at an unprecedented rate and the aquifers are drying up. The rivers are losing their capacity. More than 50 percent of the world’s freshwater comes from mountain runoff and snowmelt. Wars over water resources will erupt in the period ahead apart from the already bloodletting proxy wars and insurgencies devastating large swathes of humanity for the obscene profits of the military-industrial complex.

To feed the rising global population of the planet without resorting to the heavy use of pesticides, herbicides and GM food that destroys the biosphere. The key issue is food sovereignty that gives people the rights and means to define their own food systems. It would give control to those who produce, distribute and consume food rather than the corporations and market institutions that dominate the global food system. It would mean an end to land grabs and would require extensive land redistribution to put the land in the hands of those who produce the food. But such a system is only possible by the installation of a planned economy after the elimination of the system of profits on which the food and agricultural sector is based

Possibly the biggest single most damaging aspect of the environmental crisis is the impact it is having on biodiversity – what is called ‘the sixth extinction’. An increase in global average temperature of around three degrees, for example, would means that 50% of all species – plants and animals – will be driven to extinction. A quarter of all mammal species are at risk. The acidification of the oceans that is taking place means that coral reefs are dying off, as are organisms that rely on calcification for their shell structure. Our own future as a species cannot be separated from this crisis of biodiversity.

Environmental issues in Pakistan include deforestation, air pollution, water pollution, noise pollution, climate change, pesticide misuse, soil erosion, floods, natural disasters and desertification. These are serious environmental problems that Pakistan is facing, and they are getting worse with the economy’s distorted expansion and the population grows. The uneven and unplanned economic growth and real estate tycoons who are devastating fertile land for short-term exorbitant profiteering control most mainstream political parties and sections of the state’s elite. Hence preservation of environment merely receives lip service. The World Bank in its latest report on Pakistan’s environment status refers it as a “vicious downward spiral of impoverishment and environmental degradation.”

To end this erosion of the atmosphere by the menace of capitalist profitability is the struggle to “change the system, not the climate”. To organise the victims of climate chaos their ecological survival has to be included as a part of the revolutionary programme. But if this struggle remains within the confines of capitalism it will become redundant. This means that all the seething problems tormenting the oppressed peoples have to be brought into the mainstream and the struggles of these deprived peoples supported. However, their solutions and emancipation can only be achieved with the victory of the class struggle.