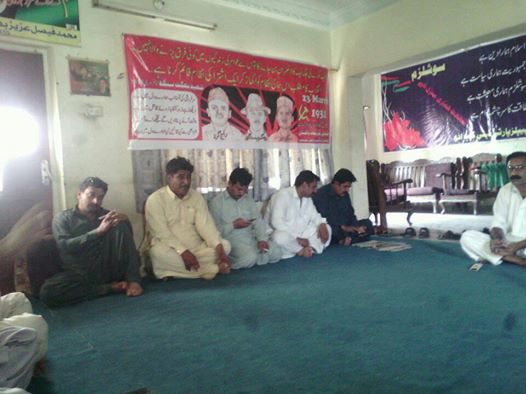 In the memories of Shaheed Bhagat Singh, PTUDC organised a lecture session on 23rd March, 2017 at Abbas Plaza, Kot Addu on the struggle of Bhagat Singh along with his companions. While giving tribute to the great socialist leader of the subcontinent, Bhagat Singh, speakers including Ali Akbar, Adv. Nadeem Pasha, Naeem Chishti, Qasim Shehzad, Mudasar Rasool Wasif, Shafqat Balouch, Amir Ali, Younas Shakir, Akram Khan, Fazal Gormani, Arif Chandia and Amir Latif said these revolutionary leaders became the heroes of the working class, especially of the youth. They raised the voice of the oppressed masses, struggle for their emancipation and united people on the class basis, beyond the prejudices of gender, race, religion and colour. They organized the movement against British Imperialism and their local hires. He (Bhagat Singh) denied every kind of slavery and everything which divides people, consequently, he including his two comrades ‘Rajguru & Sukhdev’, became the victim of imperialists’ revenge. He lives in the heart of every oppressed one; he gave the way to fight this unjust system. Bhagat became the symbol freedom, freedom from the poverty, unemployment, hunger, illiteracy and other social evils.

Today, the conditions are merely different than that of the Bhagat’s times. Still, we must struggle against the injustice of the super-structure, capitalism. The policies of capitalists are making the life of masses worse than ever, more vulnerable than ever. Even after the loot of capitalism, today, it is trapped in the continuous crisis, the organic nature of capitalism at its work.

The solution to these problems is only in the scientific socialism.